If you missed Part 1 of this week’s episode, click HERE.

When are girls going to learn to write “tacos” as their fear on Bachelor applications?  COME ON, GIRLS!  If you write “heights”, then you are for sure going to be jumping off of a building or out of a plane.  This is a lesson that Tayshia had to learn the hard way. 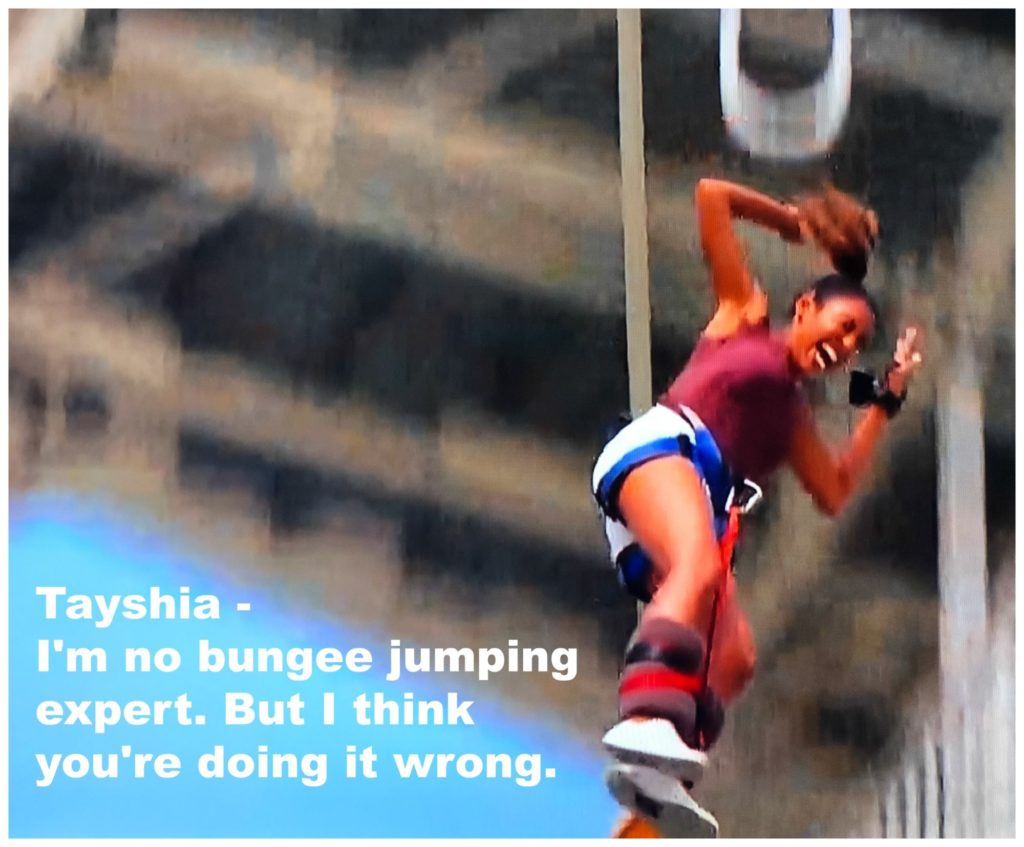 Use your head, ladies.

On Facebook last night I asked people to sound off in the comments with the 3 fears they would put on a Bachelor application, and OMG there were some good ones:

Shopping, Aruba, and Spas  – by Julee

YES!  Nannies and housekeepers are down right terrifying.  SO FUNNY!

So………. let’s take a walk down memory lane just in case you missed anything.  Click HERE for the season premiere, where I crowned a sloth the winner. 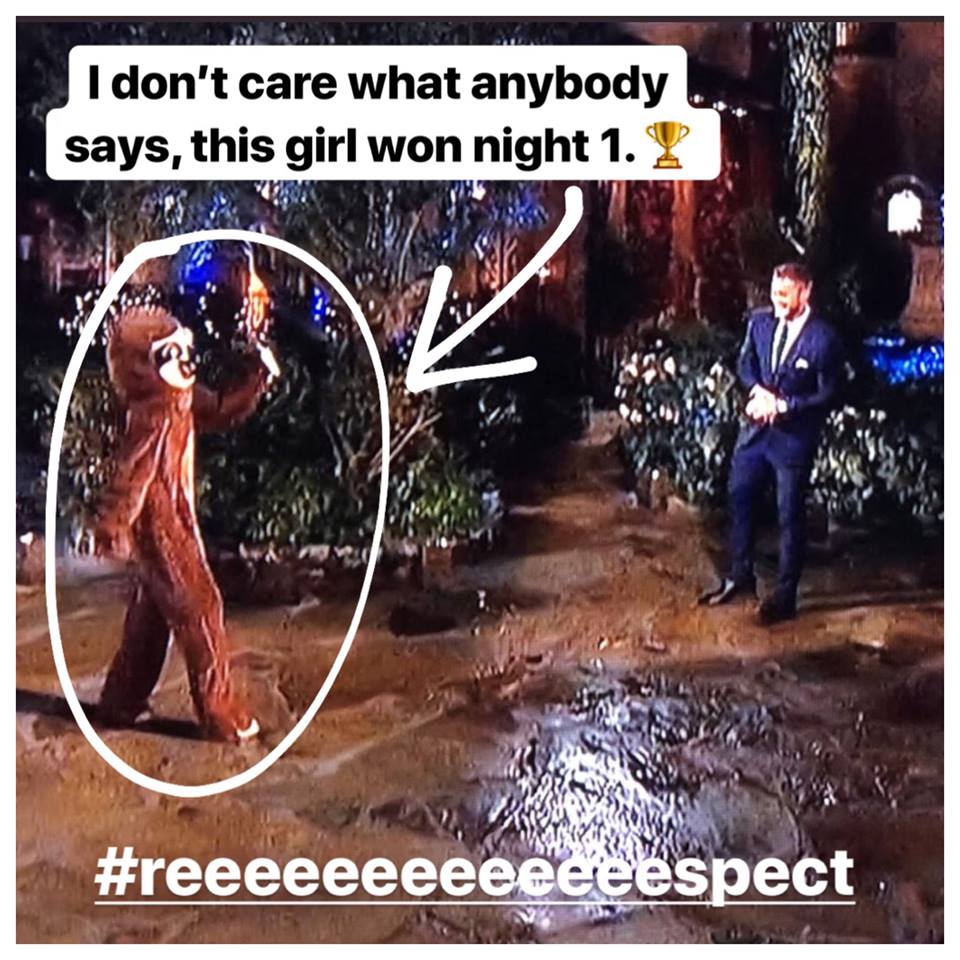 Click HERE for the week 2 recap, where we all learned that we need to have a memorized toast in our back pockets just in case the occasion arises.  #rolltide 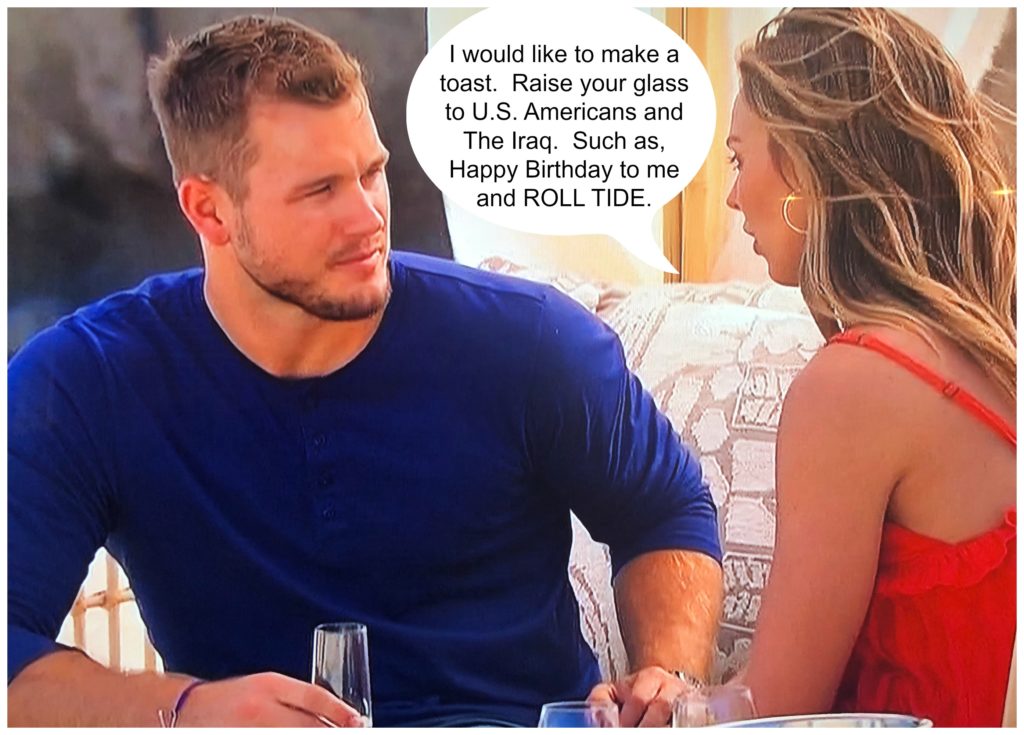 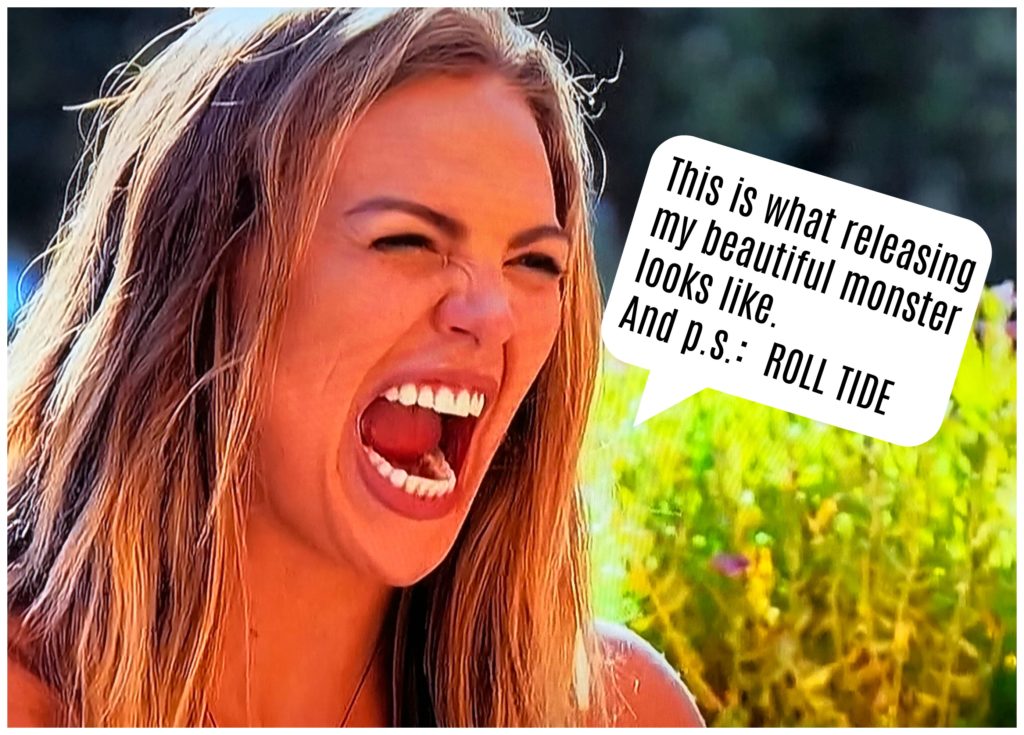 All right!  Let’s get to Part 2 of this week’s episode!

The show opened with Caelynn looking all sorts of darling, ready to head out on her 1:1 date with Colton.  She hadn’t received the date card yet, when a man in uniform popped in and handed one over.  #fancy 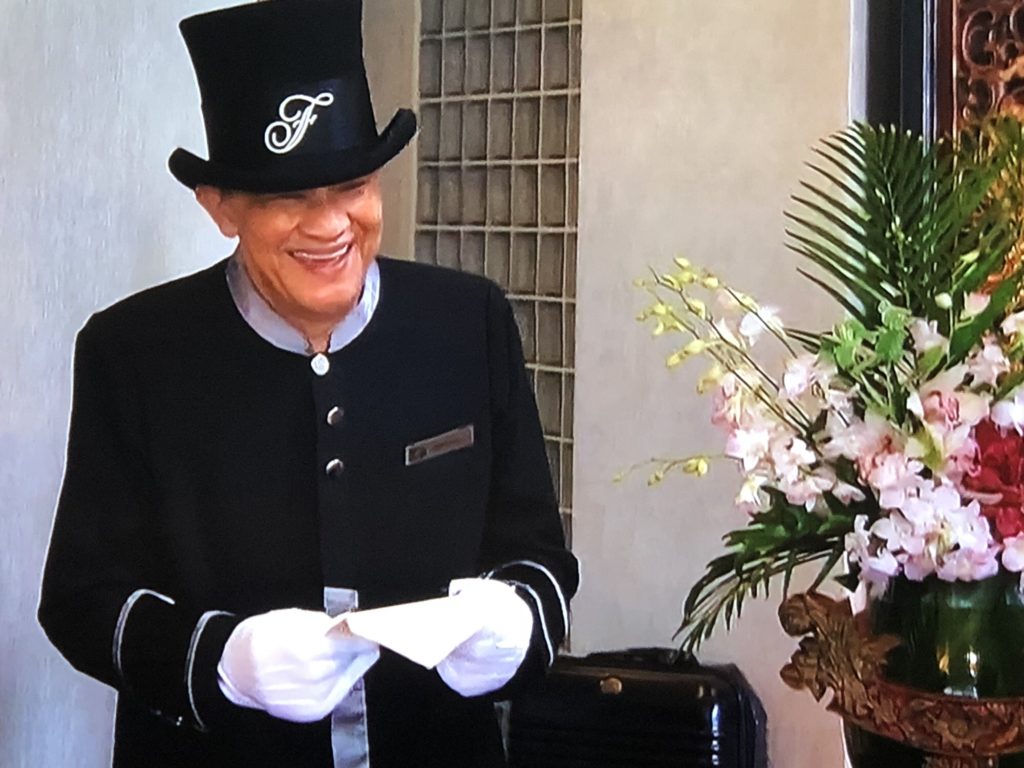 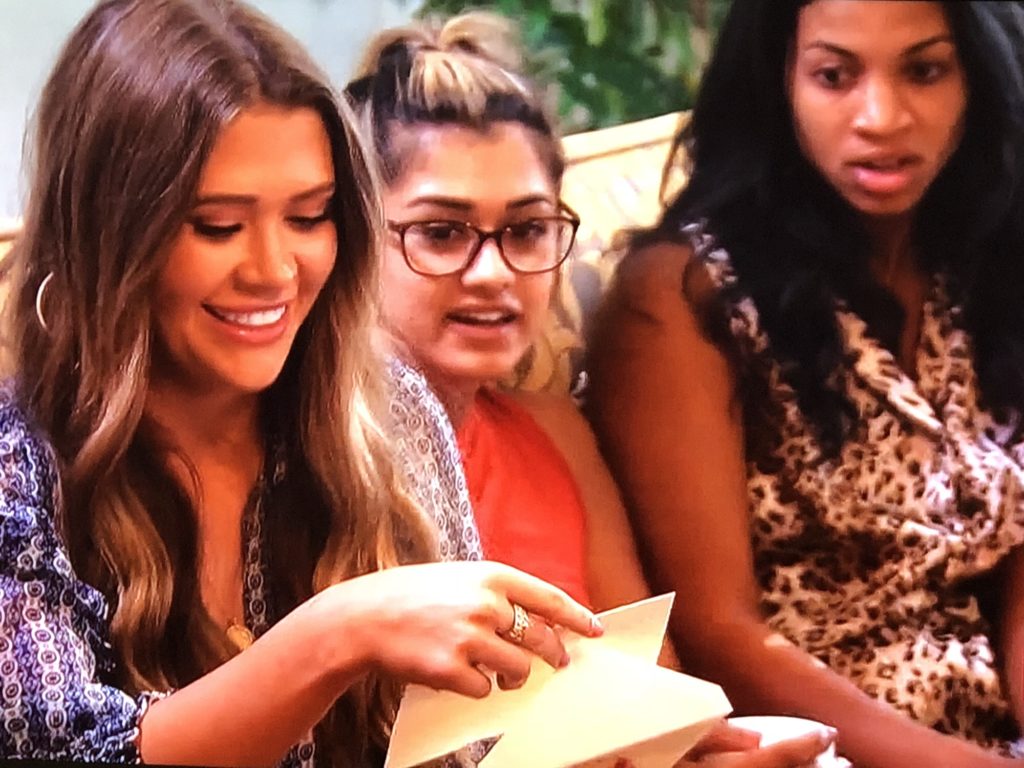 And this is what it said. 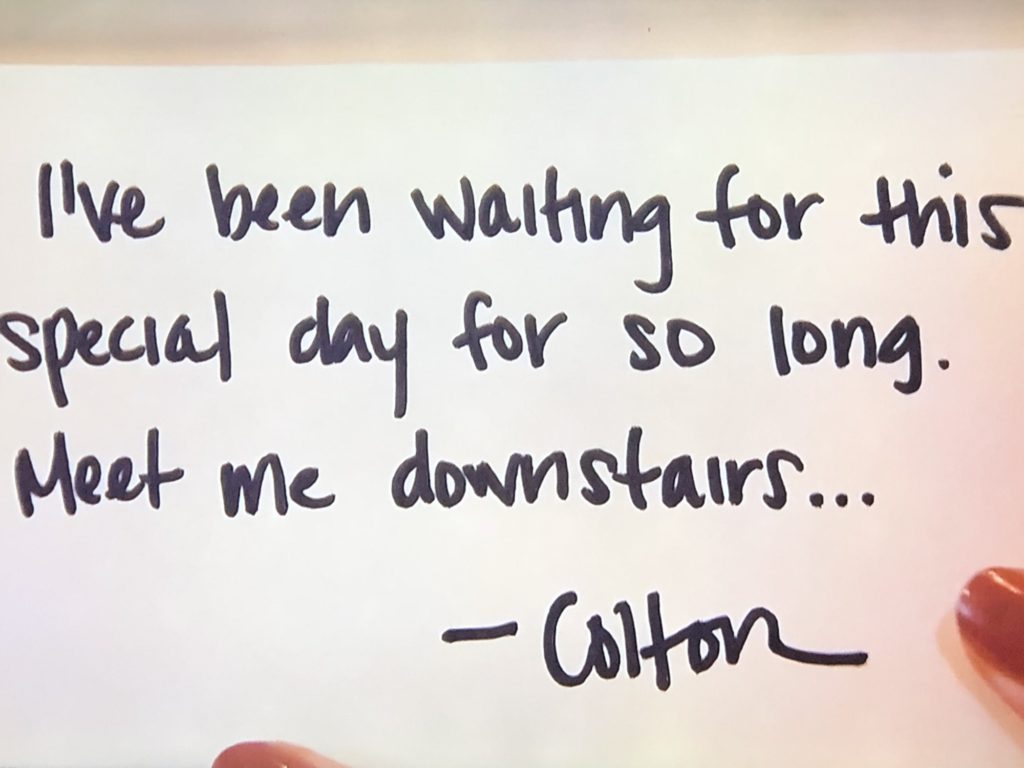 Caelynn took off with Colton…but back at the hotel, the Hannahs were sitting on the couch talking about Colton and Caelynn’s 1:1.  Miss Alabama Hannah made a comment about Caelynn and how she would probably like a 1:1 date where she would be pampered. She said it as if it was total put down, but then she tried to make it sound like it wasn’t a put down.  It was hella confusing, because OF COURSE the girl would like a 1:1 date where she got pampered.

And just for the record, she made this face again. 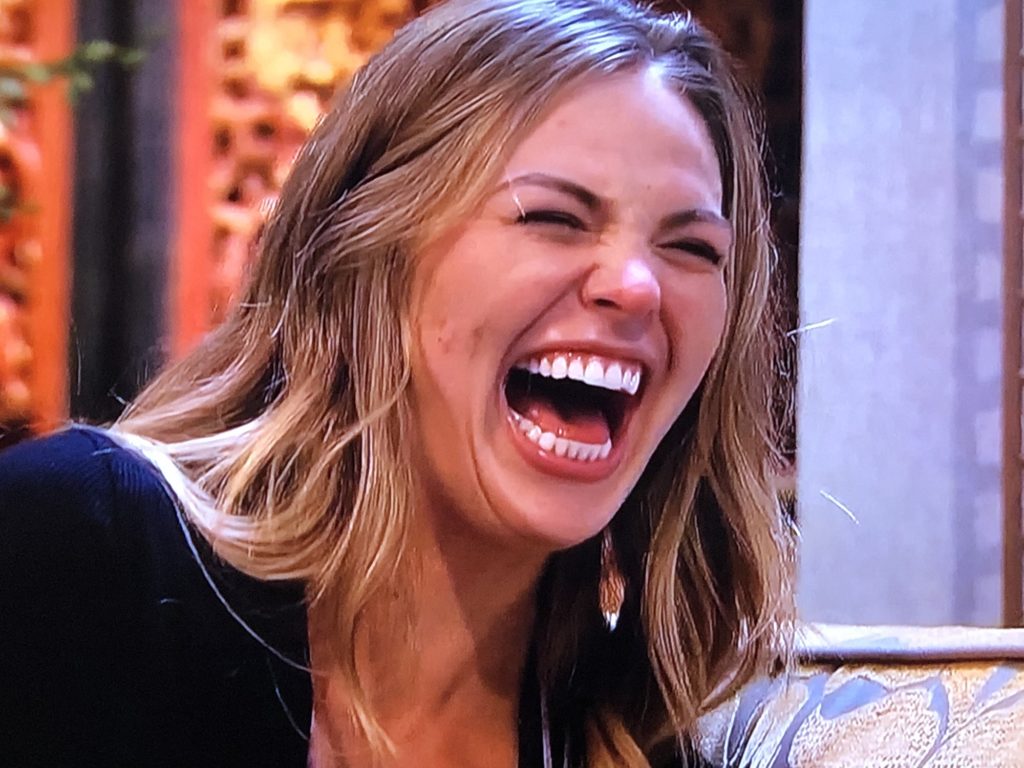 They talked a bit more about the date, and Hannah made it clear that she just didn’t really want to know anything about it.  But then she said, “Ugh. What if he buys her shoes and a dress.”

And that my friends is what they call foreshadowing. 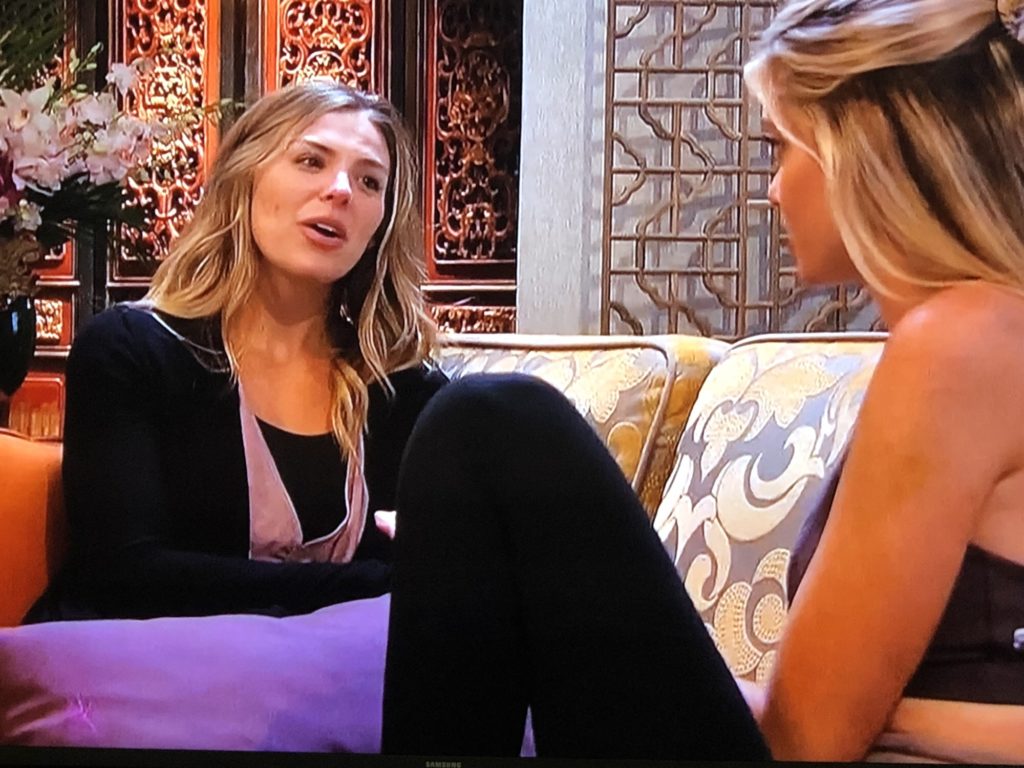 The happy couple strolled into a posh boutique, and Caelynn started trying on outfit after outfit.  She was loving it, but in many of the outfits she was scantily clad, so he loved it even more.  I kept thinking if that was me, I would be all, “Ummmmmmmmmmm, where’s the comfy clothes section?  And Do you have any blardigans in stock? 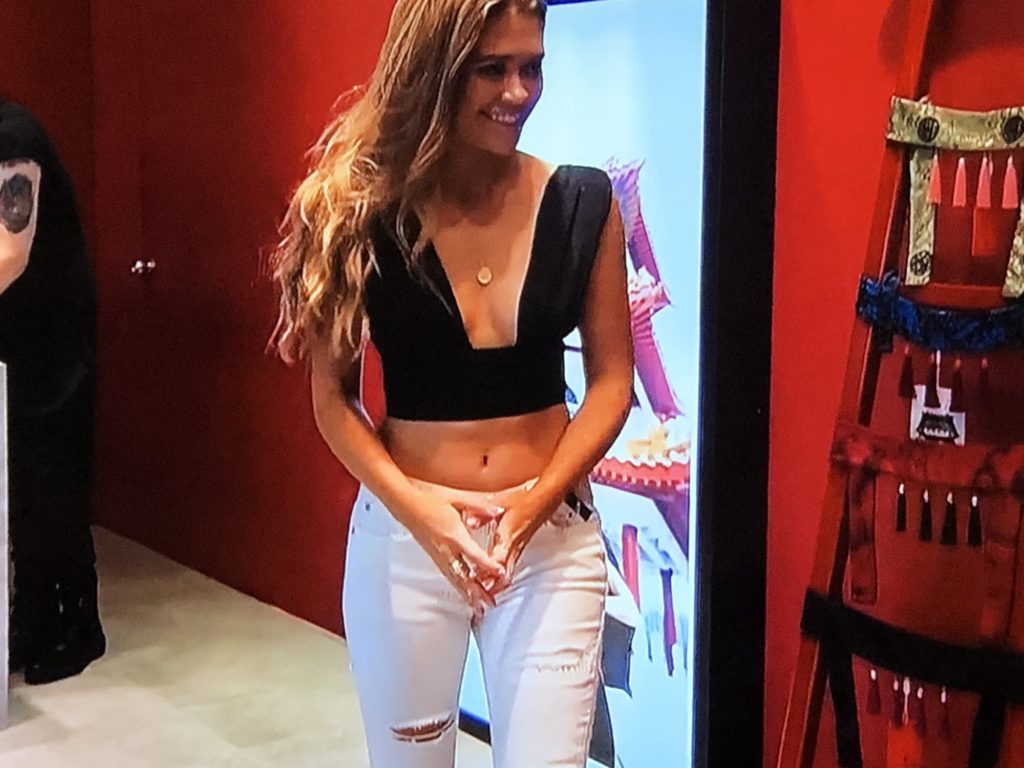 See?  He was enjoying himself. 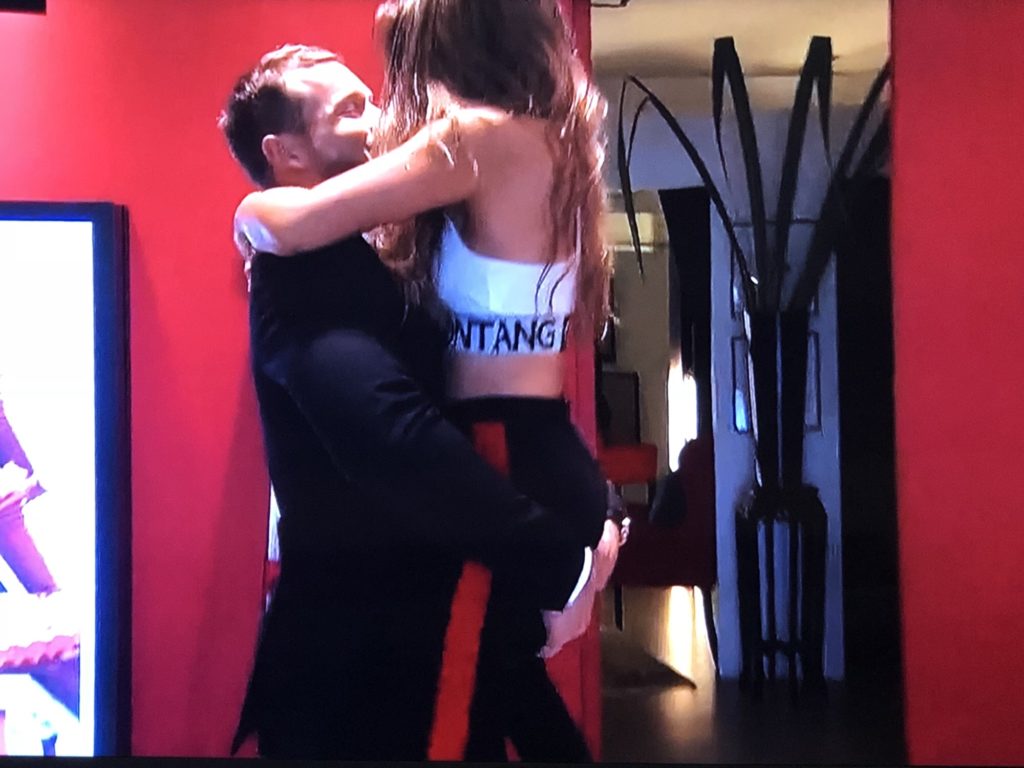 She came out in a couple of seriously fancy dresses, and no surprise here, Miss North Caroline knows how to rock an evening gown.  After putting on her last dress,  she walked out looking like J Lo.  And I laughed out loud thinking what I would look like in that dress.  I would have had to politely ask for a swing dress with some 3/4 sleeves. #andsomespanx 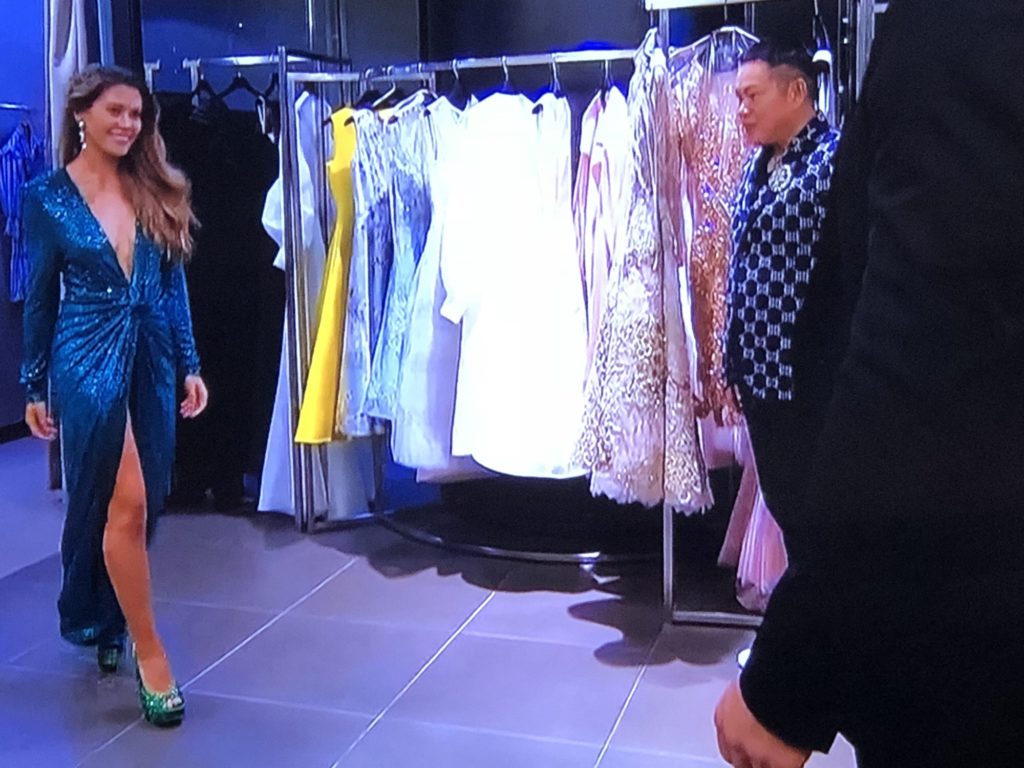 After the shopping portion of the date was over, Caelynn then returned to the hotel so she could change for the evening portion of their 1:1.  WELL PLAYED, PRODUCERS.  She walked through the door with all of the shopping bags in her hands.  They had her loaded down like a pack mule for maximum impact. 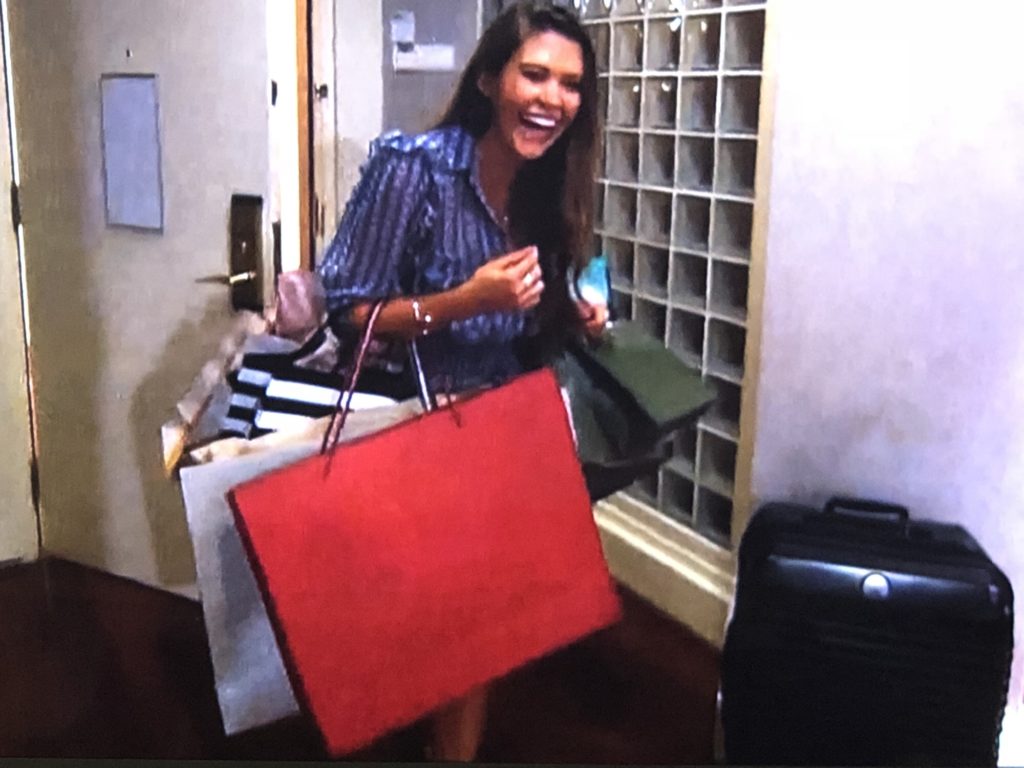 The girls were all acting happy for her.  See, look how “happy” Nicole is. 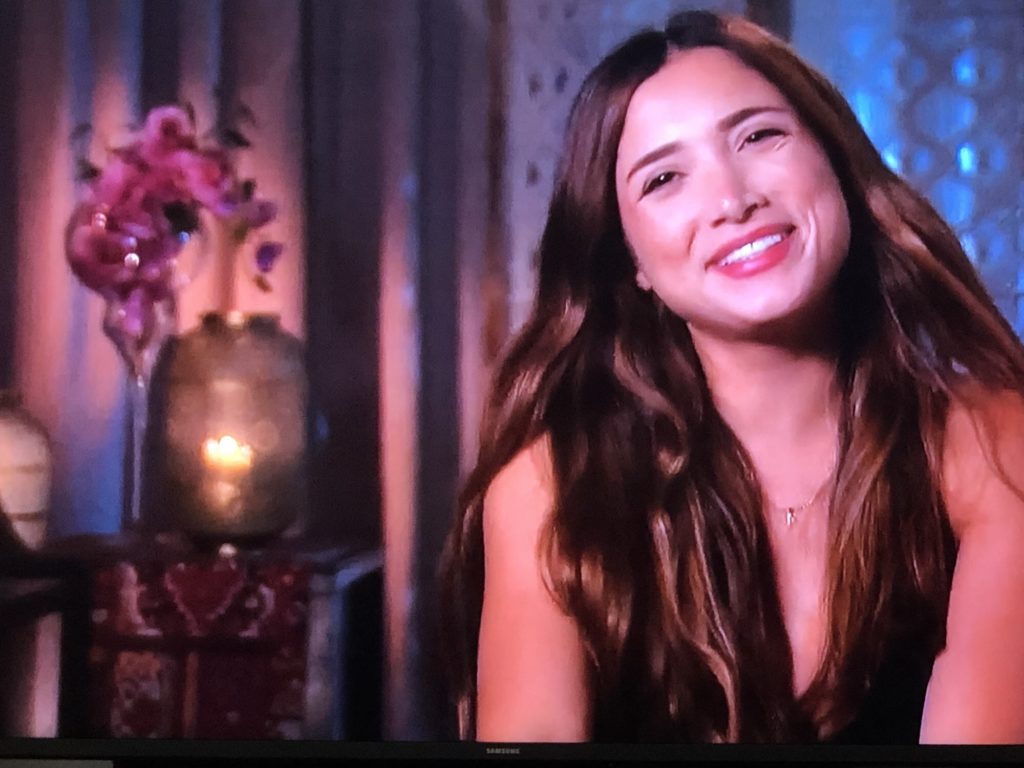 But let me say, this girl right here is a class act.  Cassie was very sad that she didn’t get to go on the shopping spree with Colton, but she also very sincerely said, “But I am so happy for Caelynn.”  I mean, the girl is SWEET AND PRECIOUS.  Mark my words, this girl will go far. 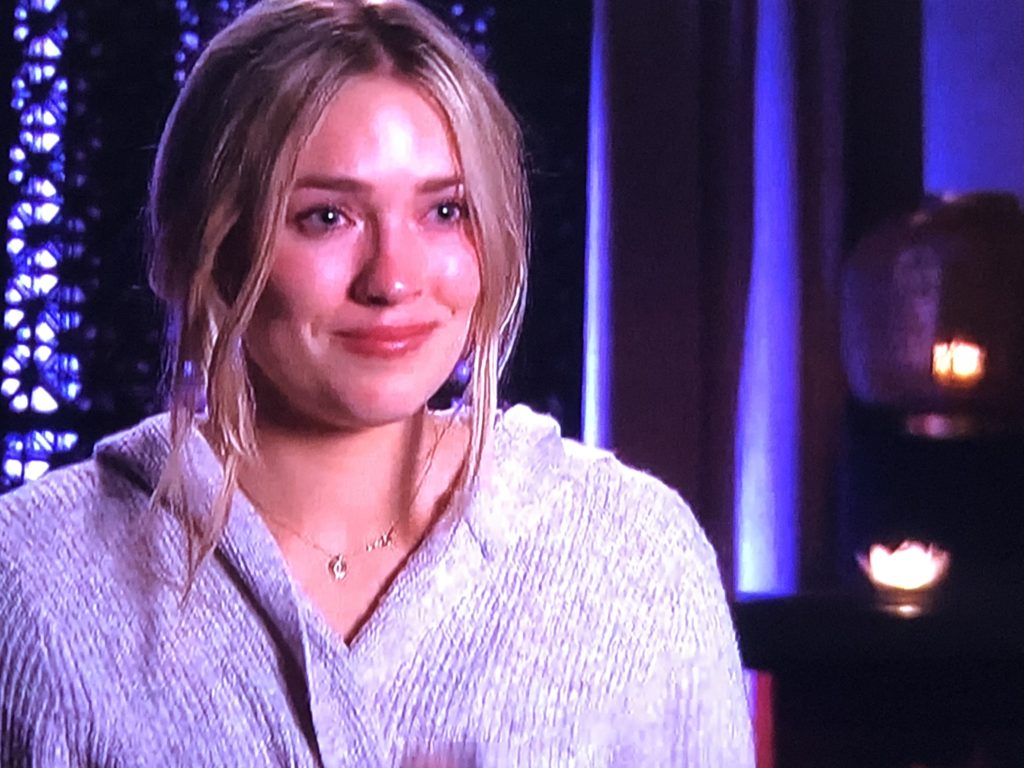 Caelynn changed and headed to meet Colton for dinner.  She looked gorgeous and told the cameras she had something important to talk to him about.  They sat down, she told him what a wonderful day she had and thanked him for the clothes.  He responded with “Well, when you look as good as you did in them, you HAVE to buy them.  There’s no other option.”

HE IS SO WISE.  This is a belief system that every supportive husband should possess.  #youlookgreat #youshouldbuyit 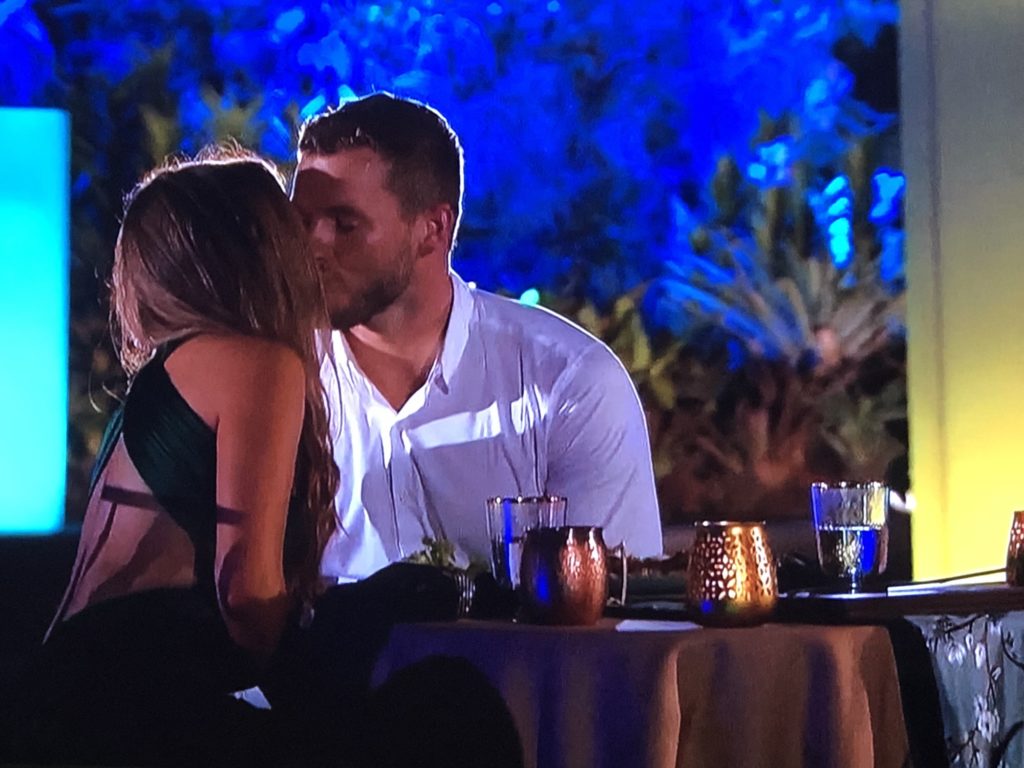 And then things got serious.  She said she had to share a story with him that was very hard to share, but she knew it was important.

Colton sat, held her hand, and respectfully listened to her heart wrenching story about when she was sexually assaulted in college.  She shared details, talked about how it had changed her, and said that shame and guilt even kept her from telling her parents for over a year.

When she was finished, he said, “I want you to know that with me you’re safe.”  And I’m not sure there is anything he could have said that would have been sweeter.  Colton then opened up and told Caelynn how one of his past girlfriends had been sexually abused, and how he had handled that and helped her walk that road.  He ended it by saying to Caelynn, “You’re incredibly strong, do you know that?”

If the boy keeps acting like that, I’m going to soon forget about his interdental /s/. 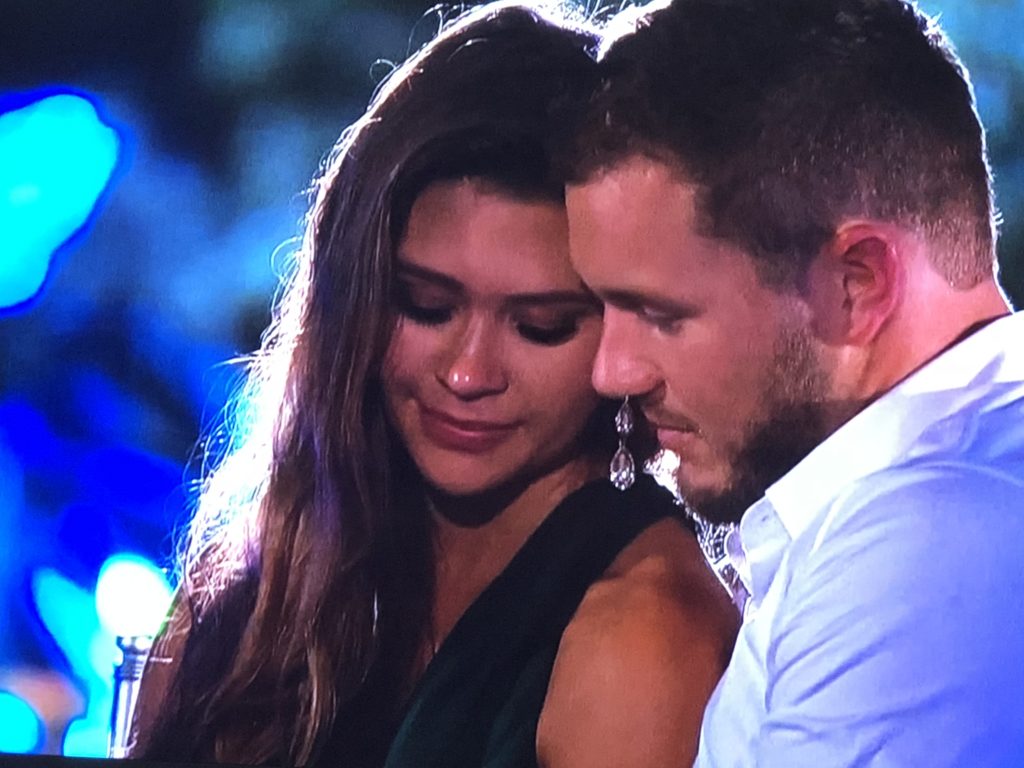 She said, “I’ve been through hell and back, but every time I open up, it makes me stronger.”  She said she was determined to not let that dark part of her past diminish who she was or her happiness.  WOW.  At first, I felt weird about listening in on this conversation and the fact that Caelynn was sharing it with the world.  But after thinking about it, I felt strongly that she was incredibly brave.  I’m imagining her sharing her story helped lots of other young women who have been through something similar.  I’m a huge fan of Caelynn.  I think she is amazing.

12 year old Hannah wasted no time, she grabbed Colton and they headed to a hotel room.  They sat down on the bed, and she complimented him on his bed making skills.  Has the girl never been to a hotel before?  They have people that do that for you, Hannah.

And then they got comfy on the bed.

WITH THEIR SHOES ON.

All sorts of no. 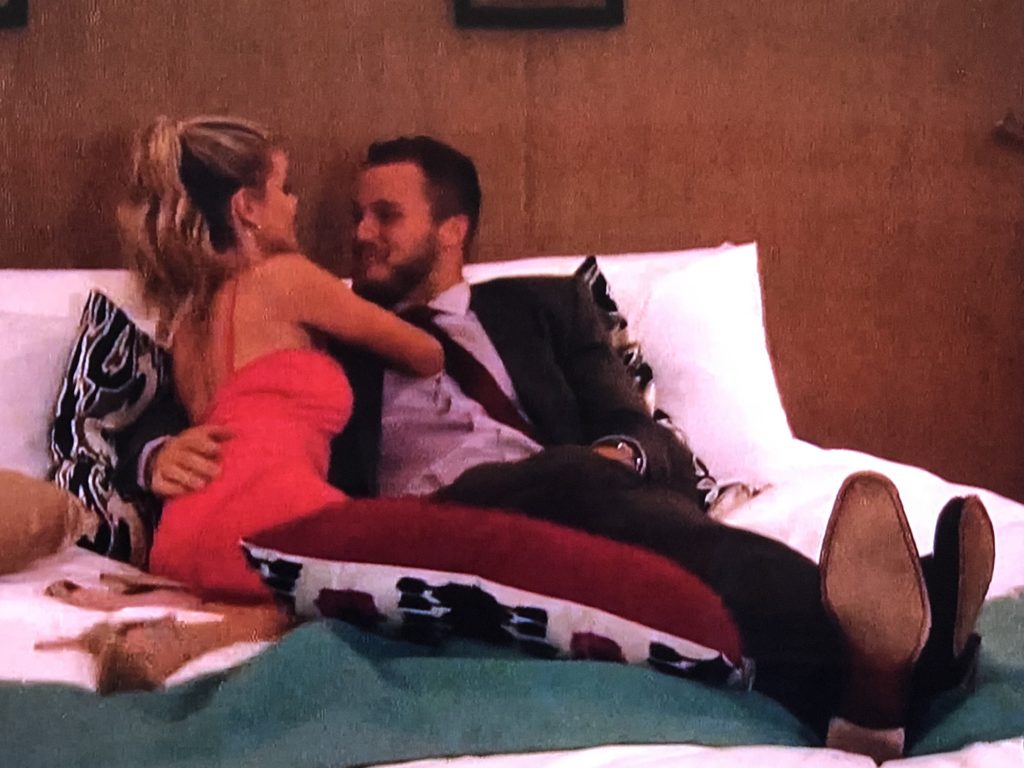 And then they rolled around on the bed.  And as uncomfortable as I was regarding the rolling around make out sesh, it was THE SHOES that were doing me in.

Because they were rolling around WITH THEIR SHOES ON. 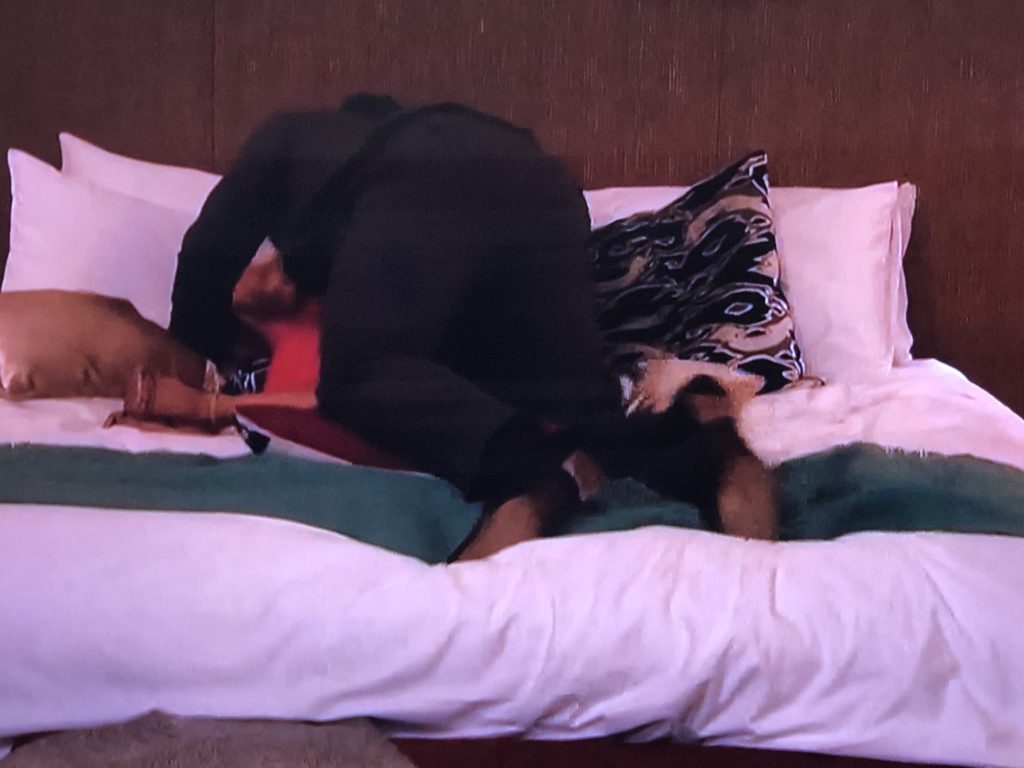 Please, join me in my judgement. 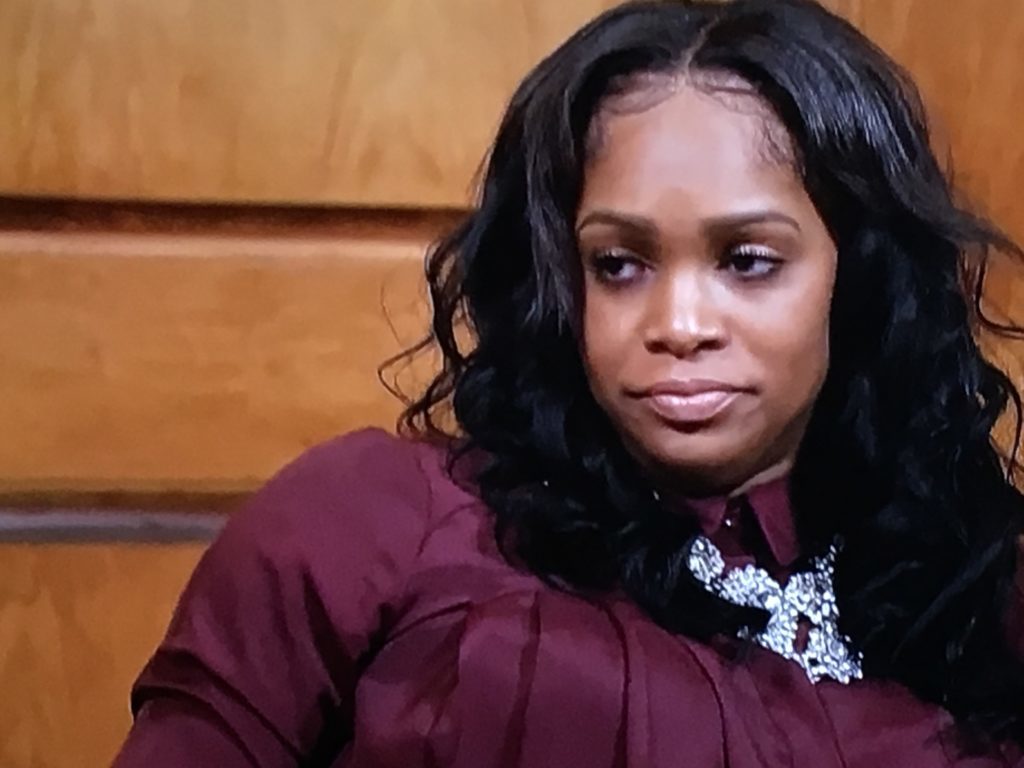 Back in the group of girls, Caelynn asked Miss Alabama Hannah if they could talk for a minute.  They plopped down on a couch together, and then something very unexpected happened.  Caelynn suggested that they let the past stay in the past.  She thought that they should support each other as women.  And Hannah agreed.

They even ended in an embrace.

What was this spectacle of maturity?  I was confused. 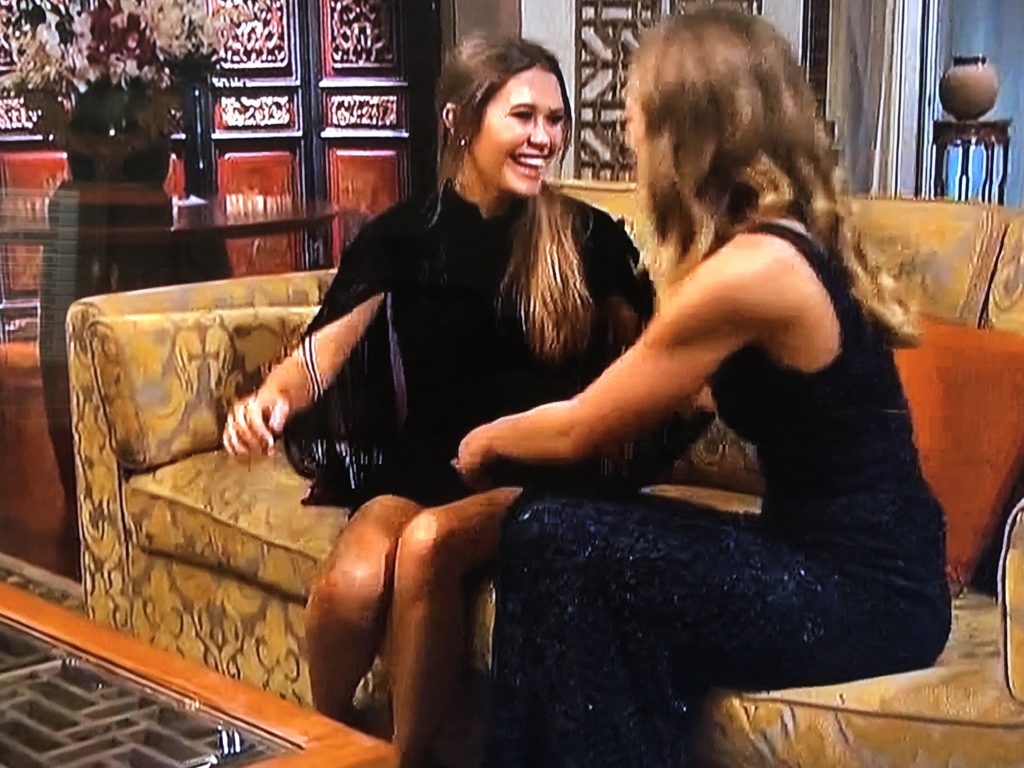 Back with the rest of the girls, Courtney was throwing serious shade at Demi.  So, Demi went straight to Colton and called Courtney “the cancer of the house.”  OUCH.  She also said things like “she attacked me“, which of course wasn’t really true.  I mean, I felt she was being a bit dramatic, but then I just realized it was Demi being Demi.  #youdoyouboo #wearehereforit

And then Courtney walked in.  And as he’s done in the past, Colton put it all out there.  He straight up told her that Demi called her the cancer of the house. 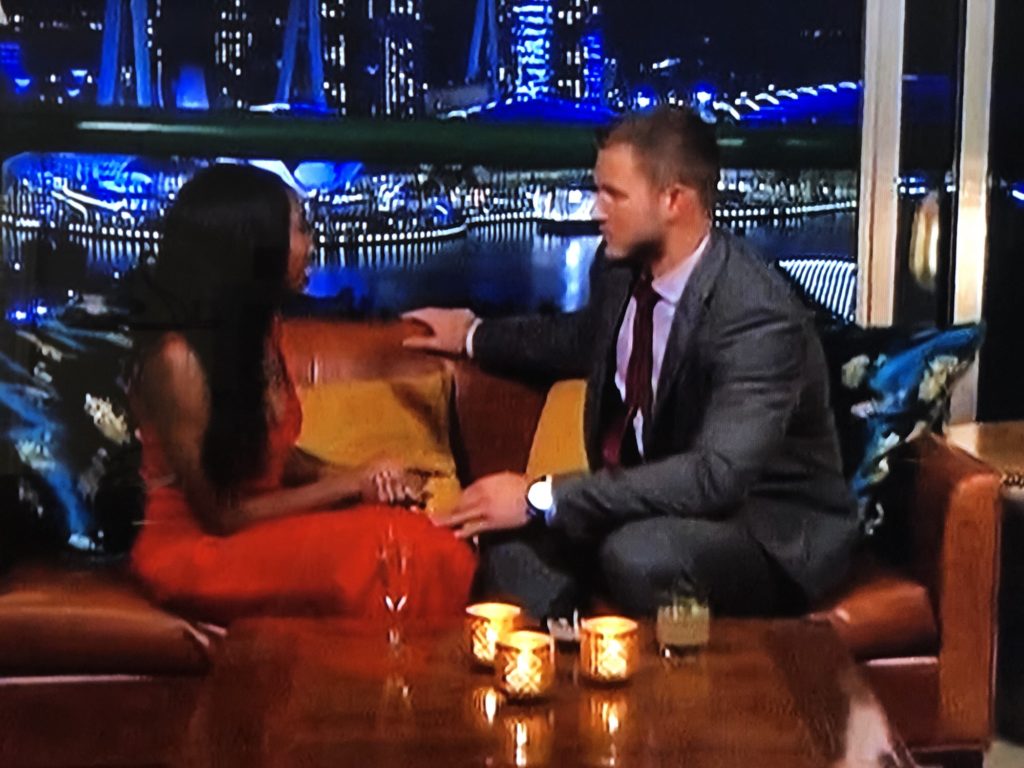 Courtney fought back by saying that it wasn’t true.  And then she accused Demi of just wanting fame and trying to win a game.

Courtney returned to the women and said “I’d like to take a poll.  Raise your hand if you think I’m the cancer of the house.”

And y’all. Demi’s hand shot up in the air faster than you can say the most dramatic rose ceremony ever.  And when people looked at her with disbelief that she could say such a thing, she was like “What?  That’s what I said.”

The girl may be cray, but she owns her cray.

Demi and Courtney then proceeded to have words.  This girl (that I’ve never seen before) had to start doing breathing exercises to remain calm. 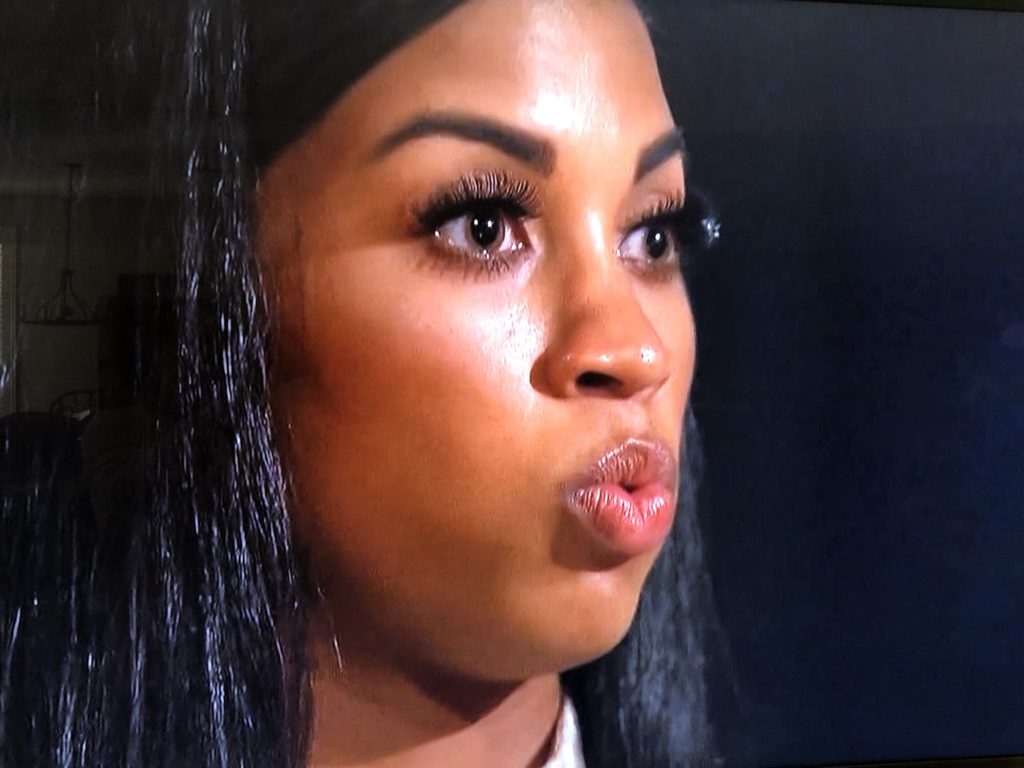 And Kirpa couldn’t hold it together. The girl was doing the church laugh.  You know, when you are trying to keep it in, but your shoulders start going up and down and your nostrils start flaring. 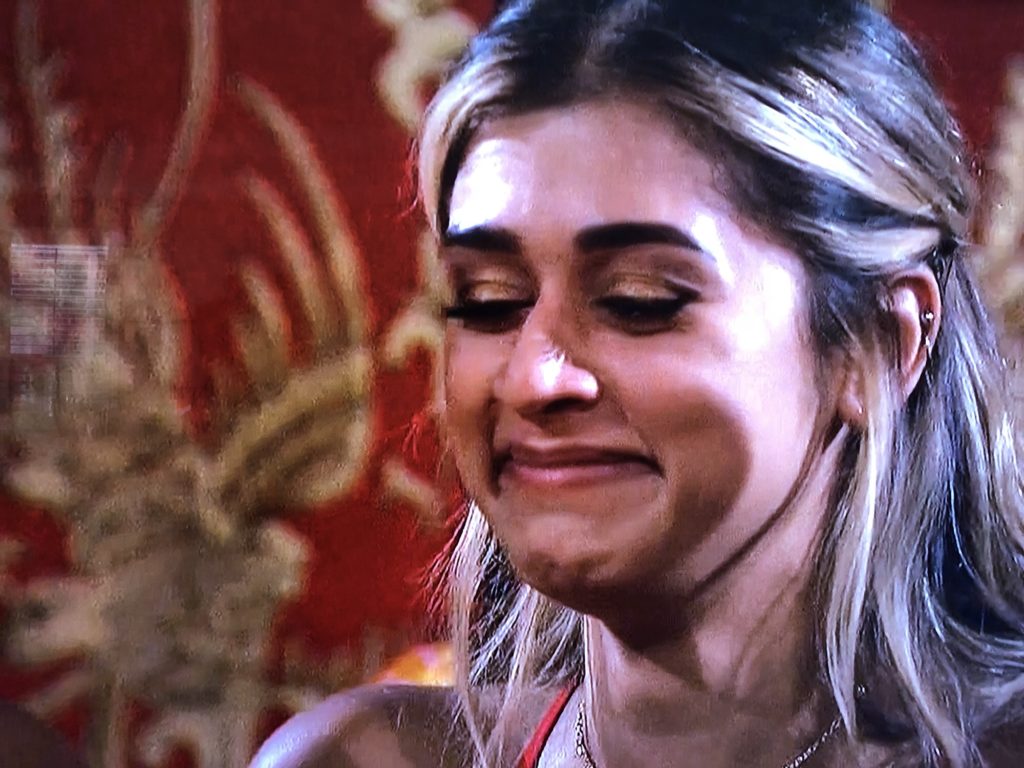 Demi kept insisting to Courtney that she was in fact “mean”, and then Courtney told Demi that she should “probably take a time out.”

It was all quite immature.

Who already had roses:  Caelynn and Demi.

Who got sent home:  Tracy and Courtney.

And this was Demi when he didn’t call Courtney or Tracy’s name.  My goodness she was pleased with herself. 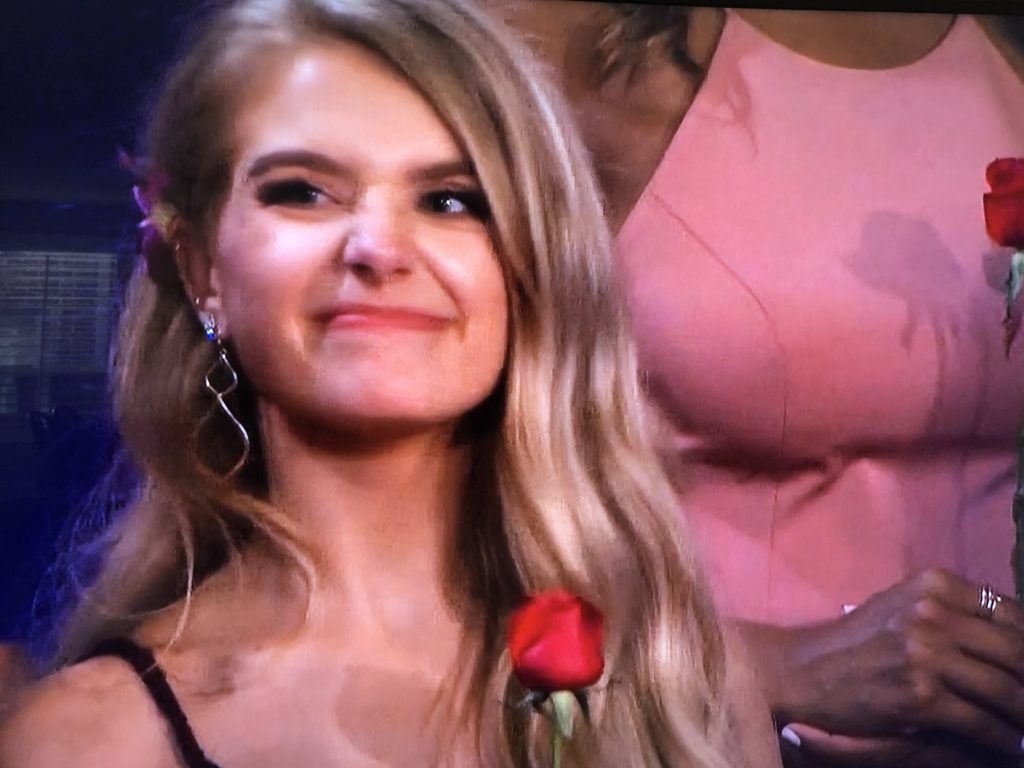 But this was me. 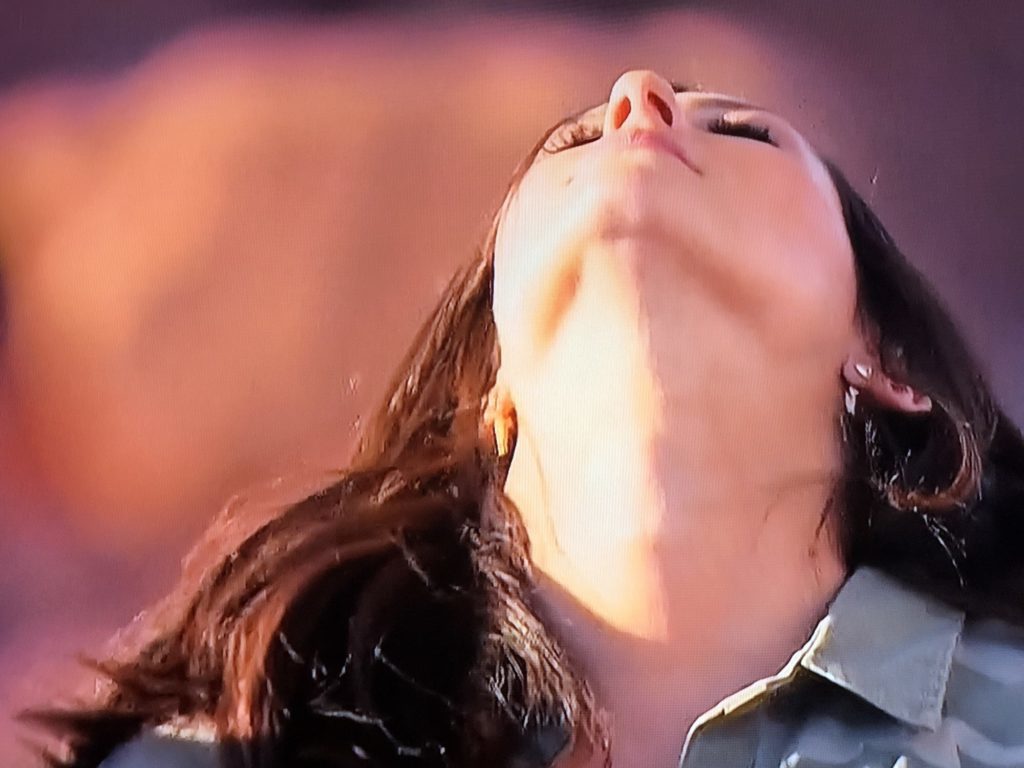 With both Courtney and Tracy gone….and with Caelynn and Miss Alabama Hannah getting along…WHO IN THE WORLD WAS GOING TO BE GOING ON THE INFAMOUS 2:1 DATE?

My mind was reeling.

All right, that’s it for Part 2!  See everybody back here tomorrow for Friday Favorites!

Filed Under: The Bachelor 17 Comments