FIRST THINGS FIRST, the winner of the #sheaffertoldmeto contest over on ig for the Nordstrom Anniversary Sale is @nancywander!  Nancy, you win a $250 gift card to Nordstrom that I will send you via e-mail today so you can shop the sale before it’s over!  Congratulations, Nancy!!! If you don’t have THE BRA and THE UNDIES yet, you HAVE to get them.  I’m being bossy because it’s for your own good.  🙂  Other favorite items I scored from the sale that are STILL IN STOCK:  this $32 adjustable necklace, the Zella high waisted leggings, and a nice basic cardigan (I got the pink smoke).  If you are looking for a splurge item to blow your gift card on (fun!), then might I suggest a couple of splurge items I got….like this gorgeous bag or watch(totally looks like a Michele watch to me)! Let us know what you get, Nancy!

If you missed last week’s recap, you need to go check it out now.  It will be worth your time, because these were the faces of all Rachel’s family members when meeting Bryan.  I liked to call this piece #getonouttahereBryan. 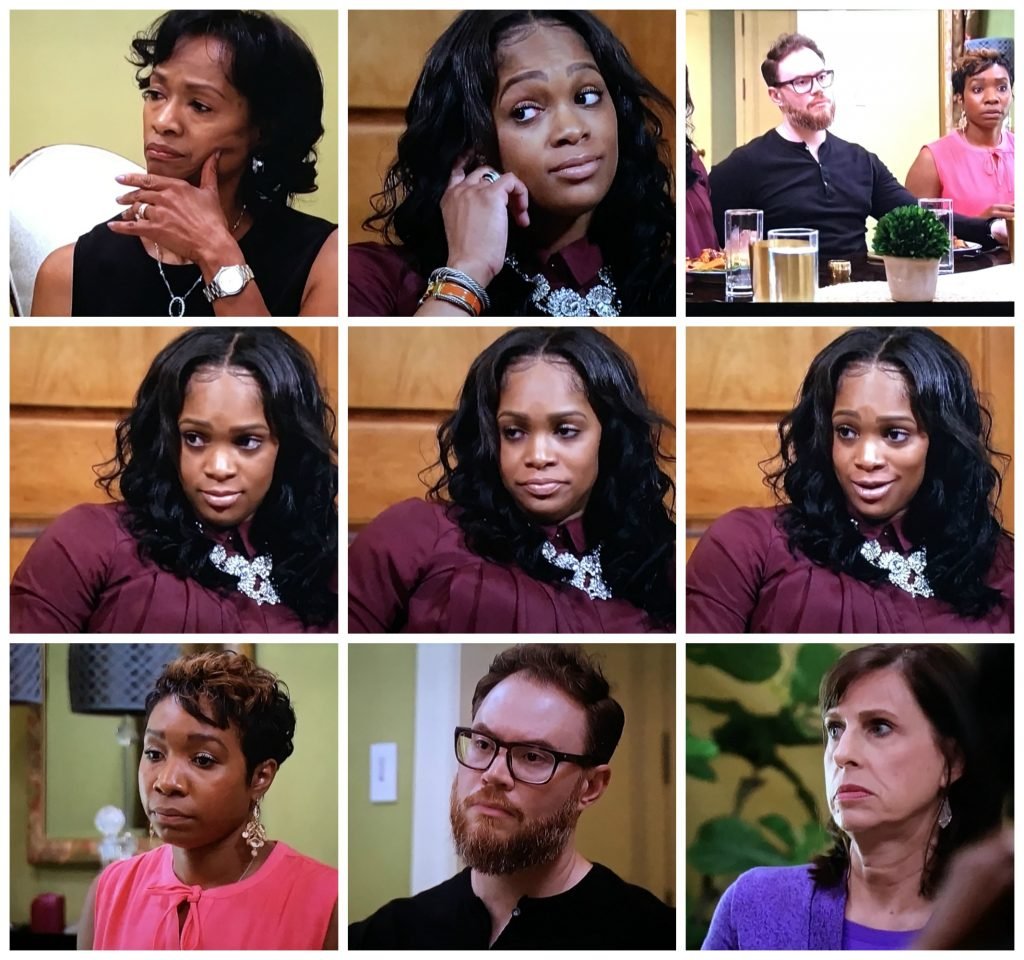 So this week is THE MEN TELL ALL, which often produces fireworks, and there were definitely some big moments this week.

AND Y’ALL.  Check this out.  At the beginning of Monday night’s show, they showed some of the MOST MEMORABLE moments from Men Tell All shows in the past.  And get this….. Shay and I made the highlight reel.  So funny!  I mean, we only made it because we were reacting to a really crazy comment (about meat in a hot tub! ha!), BUT STILL. 🙂  I started getting texts and direct messages because people were seeing me.  So fun!  Click HERE if you want to read the post where I talked about going to the taping! 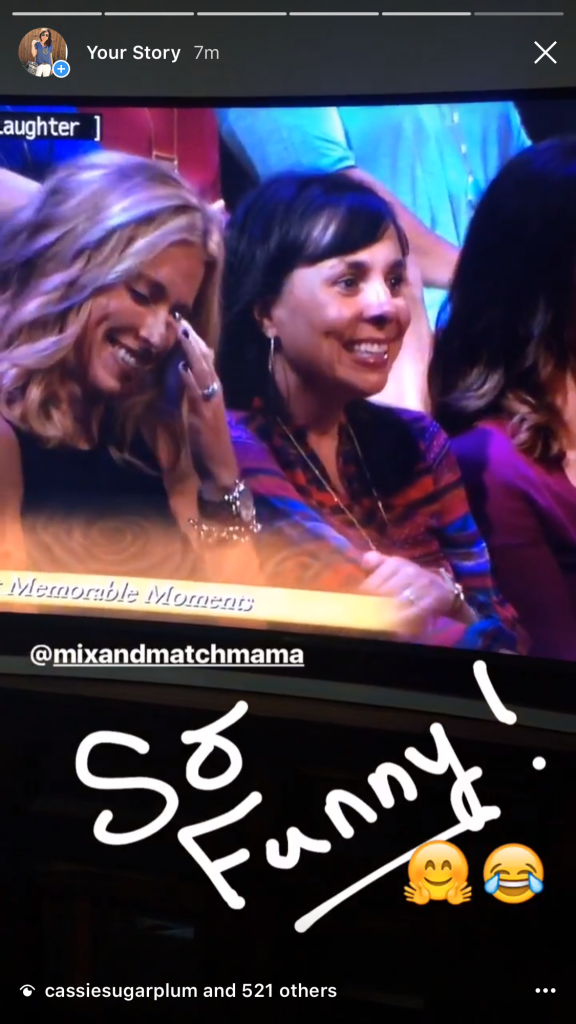 After the walk down memory lane, Harrison introduced all the guys, and I’m pretty sure a couple of them were just stand ins.  Because I don’t think I’d ever seen them in my life. Like the guy on the top left who didn’t even make the picture. But I tell you who was familiar.  DEAN. 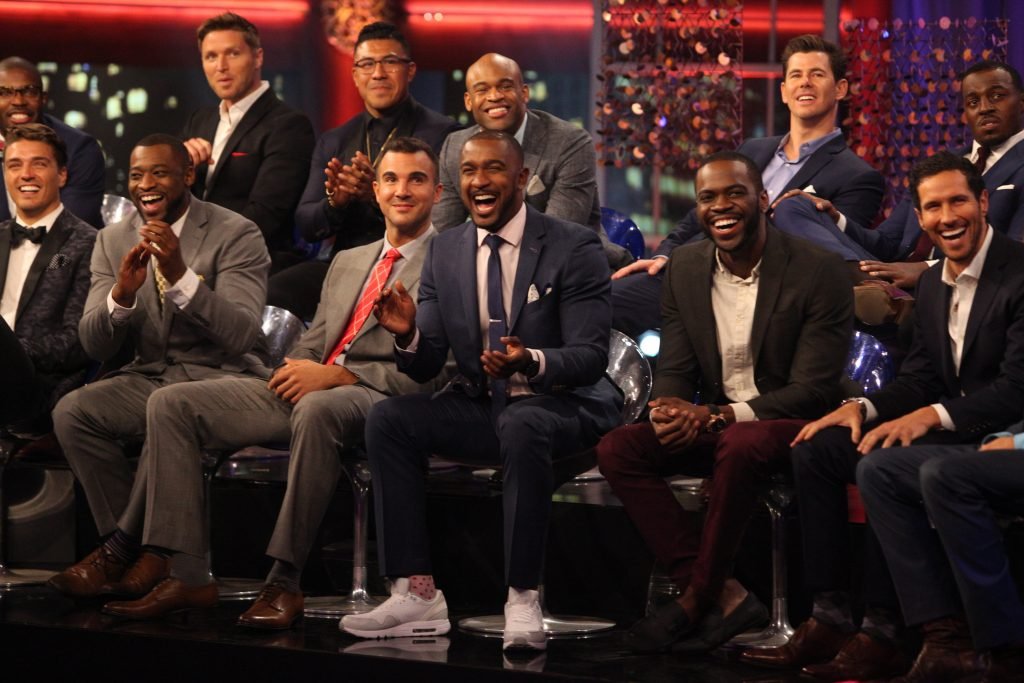 THE CROWED WENT WILD when Harrison introduced Dean.  I was a bit startled to see that it looked like Dean had been styled by Alex, and to be honest, I was unsure about his hair (a little Dippity Do goes a long way….LESS IS MORE)…..but it didn’t really matter, because I still wanted to cradle him like a baby and sing lullabies to him. 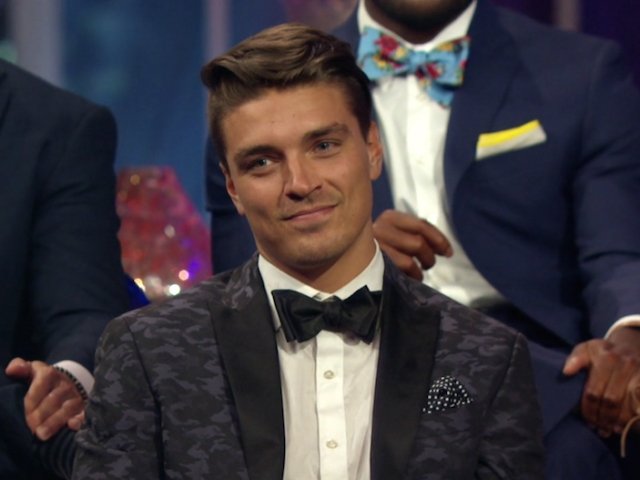 Harrison showed some of the controversial moments from Rachel’s season, and the audience showed NO LOVE for Lee.  And they gave Kenny a standing O.  This was merely a sign of things to come.

The first relationship that Harrison dived a bit deeper into was the WhaaBooom guy and Blake.  And I really don’t care to write anything else about it.  One dude I didn’t recognize obviously had something prepared.  Like he’d been thinking FOR WEEKS about what he could say to stand out at the taping, and what he settled on was “There was too much WhaaBooom, and it should have been WhaaBye.”  Yep, BA-DUM-CHING.  That was the best he had.

And then it was timed for DeMario.  I am SHAKING MY DANG HEAD AT DEMARIO.  This tool tried to act like he and Lexi weren’t a thing, even though he admitted ON NATIONAL T.V. that he had slept with her.  He also started asking everybody if there were any “ocular facts” that he and Lexi dated.  OCULAR FACTS?  HUH? He then referenced Bill Clinton, Rihanna, and Beyonce.  And I’m not sure if I’ve ever been more confused.  And then he straight up told Harrison that he had never told him that he had been with Lexi.

And we know you did because you were on National t.v. when you said it, and they happen to have these things called tapes.  WE HAVE IT ON TAPE, SIR. 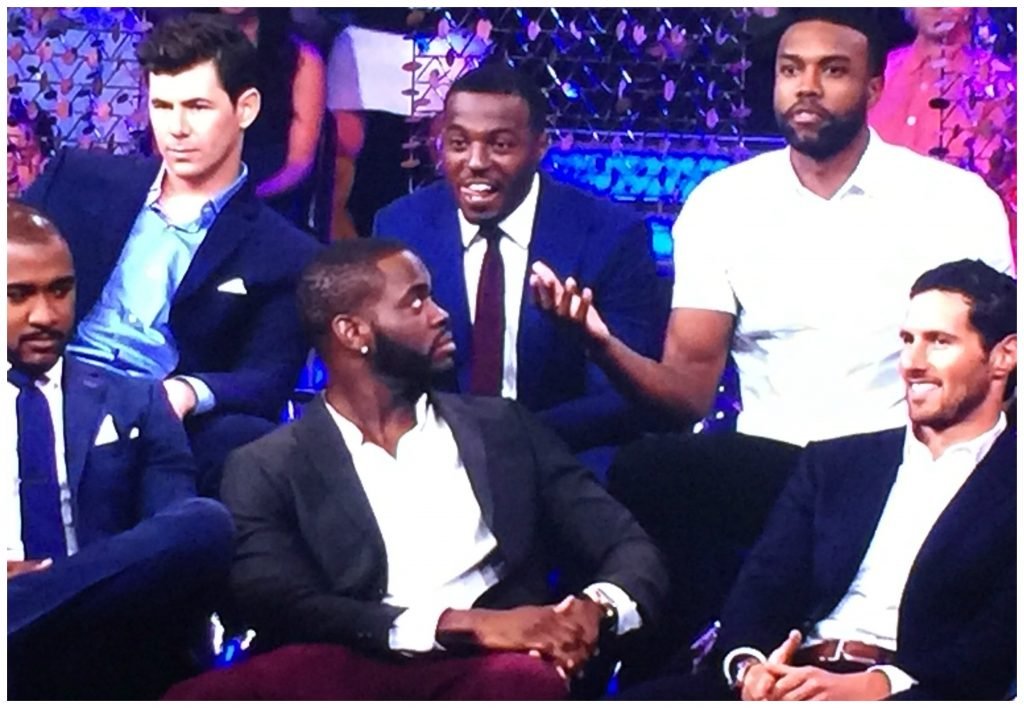 Harrison then brought up the Iggy and Josiah thing in the house.  Iggy was explaining that if he had to do it over again, he would warn Rachel about Josiah again and have no regrets.  While he was talking, the WhaaBooom guy told him he was a joke.  And then some guy told the WhaaBoooom guy that he was literally not aloud to call anybody else a joke.

Everybody kind of started getting into it with WhaaBooom, and Dean said “We’re getting off topic.”

And that’s when this happened.  The words “SHUT UP, DEAN” came out of WhaaBooom’s mouth. 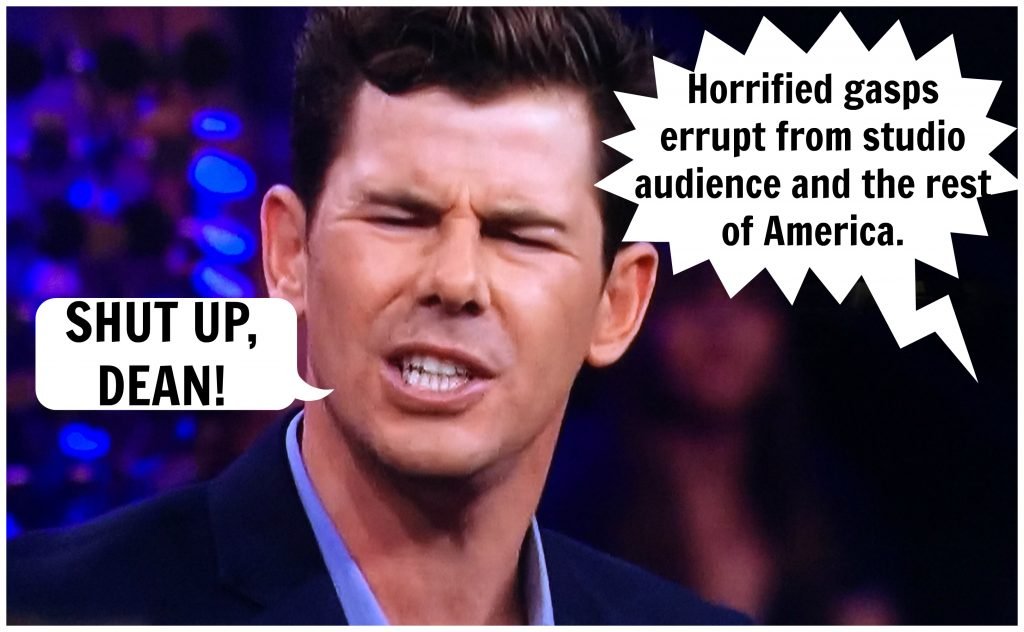 And these were the reactions… 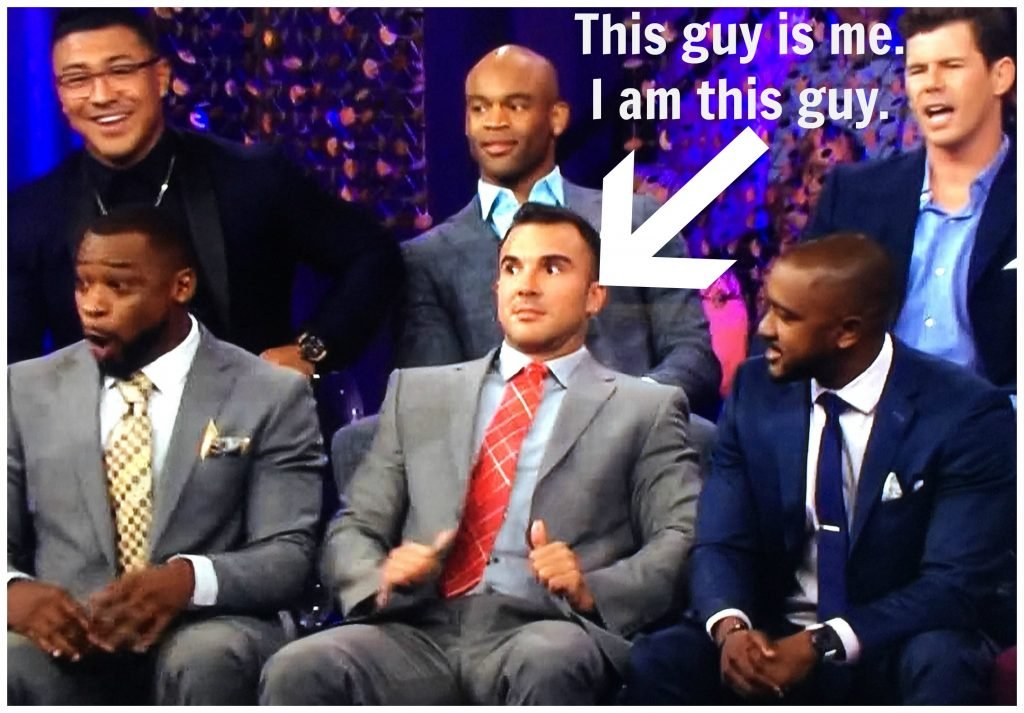 And then Kenny stood up ON BEHALF OF AMERICA and said “Don’t you say that to Dean.”

Yeah, WhaaBooom. YOU SHUT YOUR MOUTH.  Nobody talks to Baby Dean like that.  HOW. DARE. YOU.  Baby Dean is like sunshine, jelly beans, and butterflies with skin on.  #ormaybethatsjustme 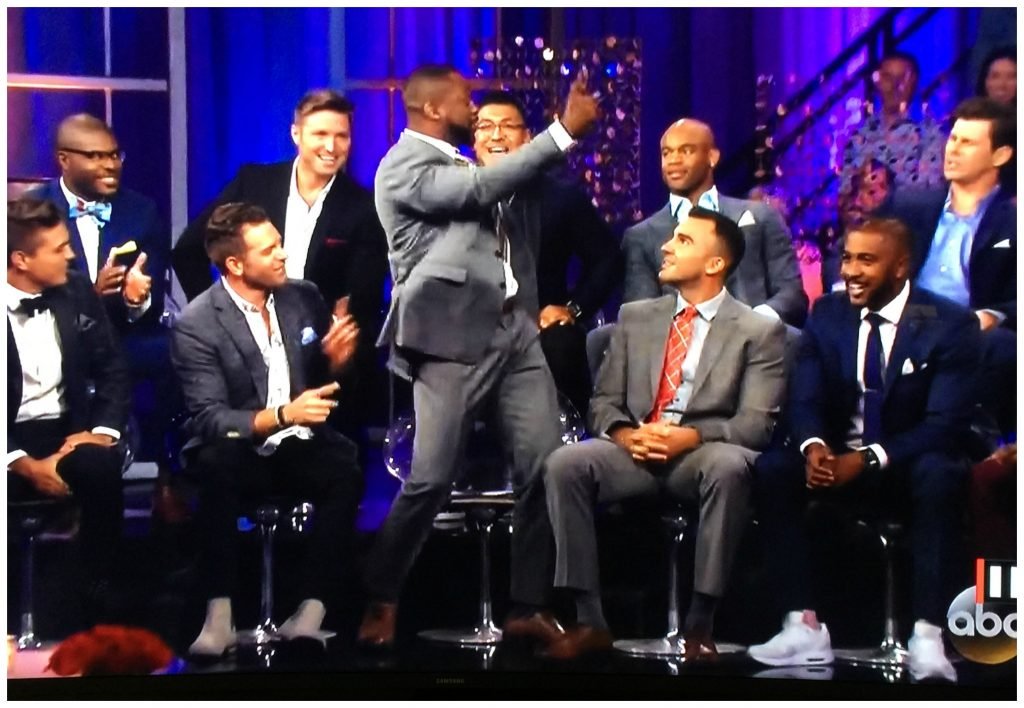 And then it was time to talk about the Kenny and Lee situation.  Kenny started by saying that during the season he had intended to say his peace to Lee and move on, but it just escalated unintentionally.  Dean stepped in and sided with Kenny.  He explained that Kenny was probably the most well liked guy in the house, and he couldn’t say the same about Lee.  Dean stated he would forever have Kenny’s back, and looking at the reaction of the other guys, everybody else pretty much felt the same way.  Well, except DeMario.  DeMario had Lee’s back.  #ofcoursehedid 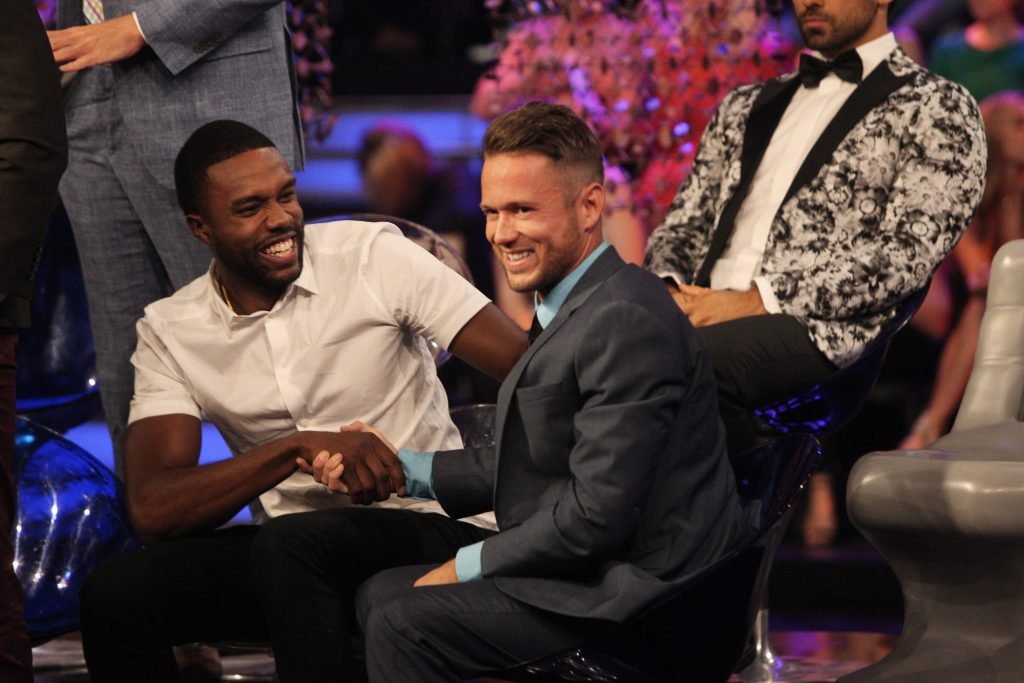 And I’m sorry, but having DeMario as a character witness is not best case scenario. 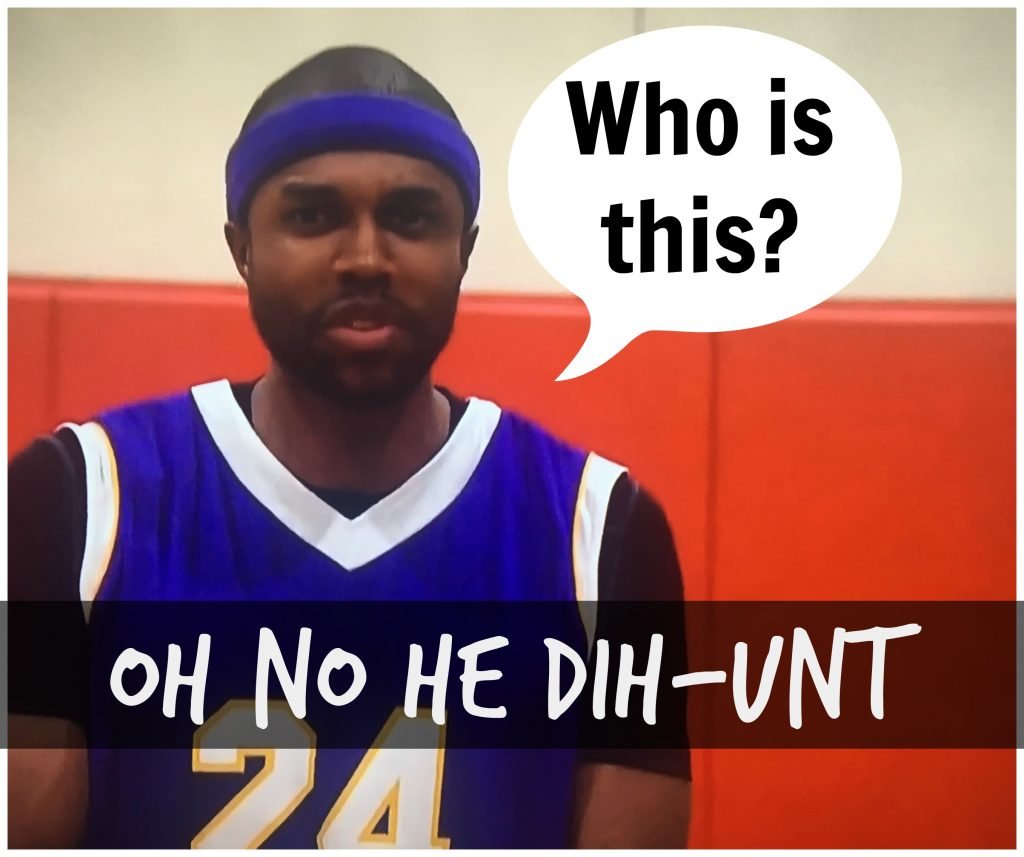 They continued to talk about Lee, and Kenny did say that in the moment, it didn’t really feel like racism.  It felt more like Lee was just out of his league (not the caliber of the other guys there), and he just didn’t know how to handle himself. And then Harrison brought Kenny up to the stage.  They did a little montage of Kenny with Rachel on the show.  AND MY GOODNESS he’s just a big ol’ teddy bear.  He turns into a big ol’ pile of mush with his daughter, and it was as sweet as can be to see. And then Harrison brought out Mackenzie!  Harrison announced he was going to send them to Disney World tomorrow to enjoy the day together on Kenny’s birthday.  Mackenzie is seriously darling.  I’m thinking Bachelorette 2027. 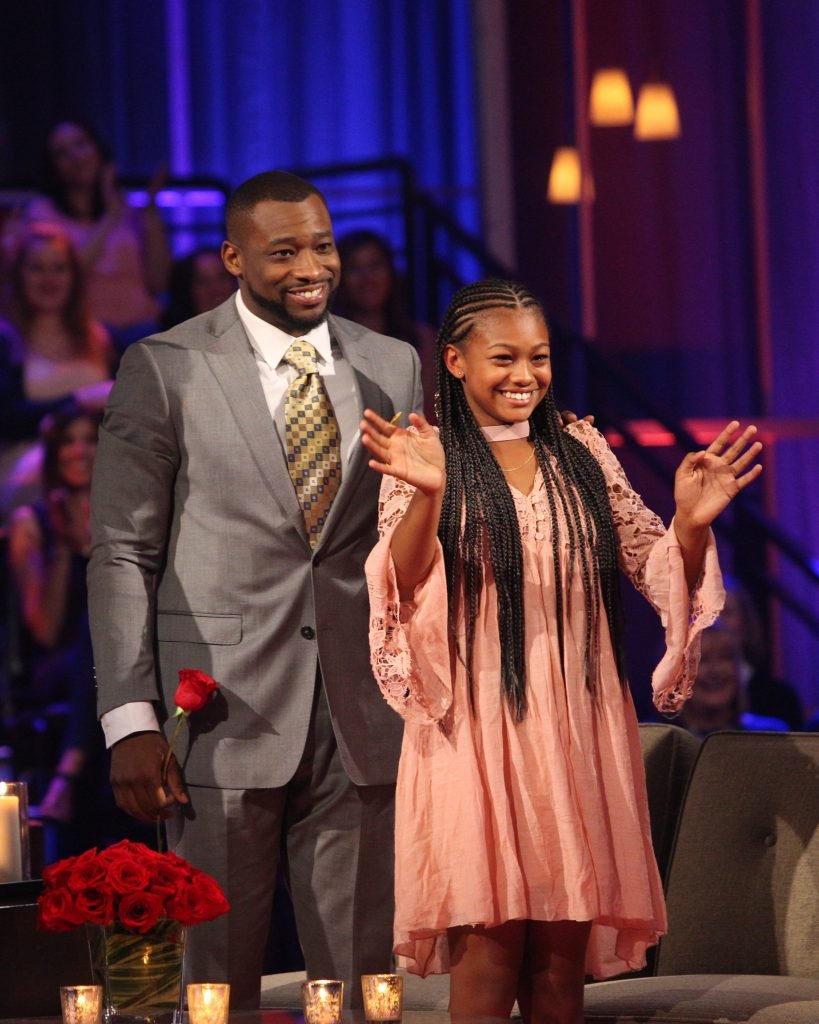 And then it was time for Lee to be in the hot seat.  DUN DUN DUN.  They started by reviewing his tweets.  When talking about the one where he made a comparison between the KKK and the NAACP, Lee kept on saying that it was only part of his tweet and it was basically taken out of context.  Unless the other part of the tweet said something like “NEVERMIND, that was a horribly insensitive thing to say , I’m an idiot, and I’m going to see somebody about my racist tendencies.”, I don’t really think the other 1/2 of the tweet mattered.

I’m not really sure if The Men Tell All production staff and Harrison were properly prepared to handle a very public talk about race relations, but it happened.  Lee kept saying things like he “should have been a better friend”, and “I was making a joke”, and I “had a lot to learn.” None of which were suitable explanations for things he had said and the way he had conducted himself.

After A LOT of back and forth, Lee finally apologized and admitted that what he tweeted and the way he acted was racist.  Still, he did not admit to being a racist. I’m hoping that he was just stupid, and not truly a racist.

Somehow Lee and Kenny ended up hugging it out. 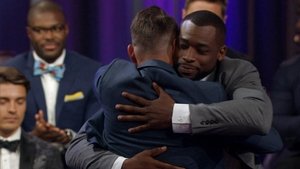 Next up was Dean!  Dean explained to everybody that he was actually grateful that he was able to go through the experience with his family.  Was it hard?  Yes.  Was it painful? Yes.  HOWEVER, he said he was falling in love with Rachel, and he never would have proposed to her without her having knowledge of his family dynamic.  And Dean is headed to Paradise!  My goodness I hope Paradise does my Baby Dean right.  #nobodyputsbabydeaninacorner

Rachel finally came out looking GORGEOUS, but that’s where my recap is ending today.  Because it’s summer.  And my kid asked to play an “epic dodgeball game upstairs” when I was trying to finish up the recap last night.  And how could I say no to an epic dodgeball game.  😉 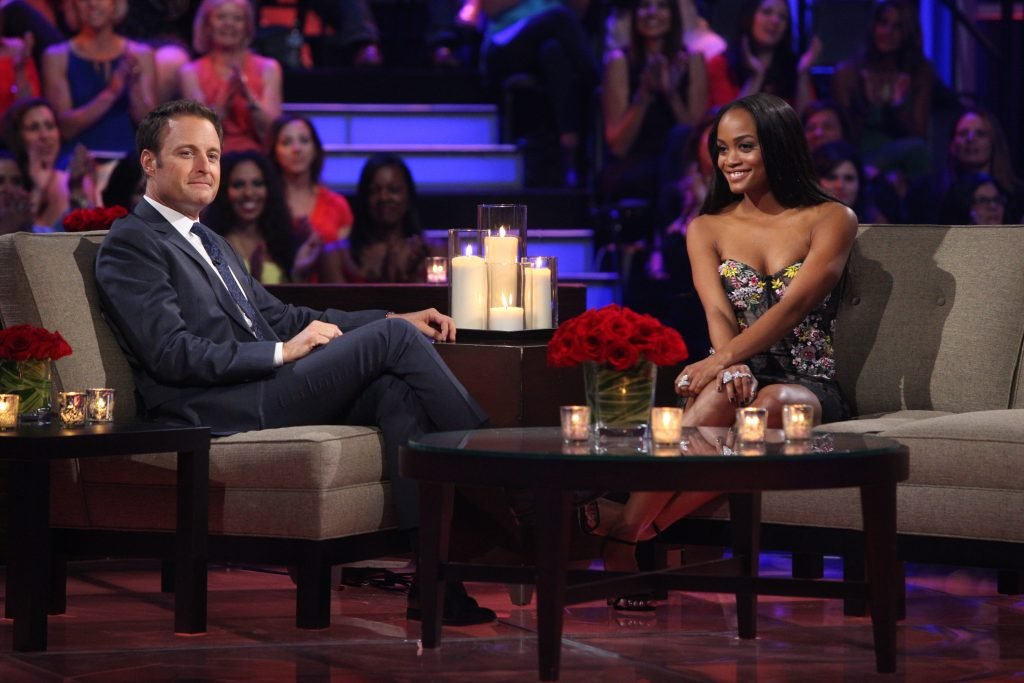 Before you go today, ladies…I have some SALE ALERTS for you!

How perfect is this outfit for fall?  All of it is on sale. 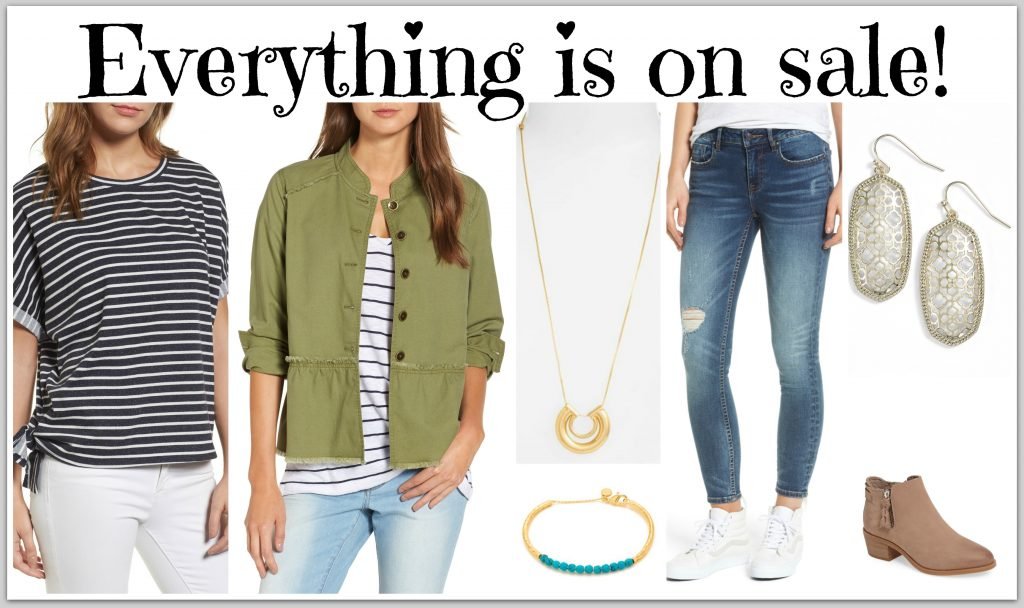 Also, I’ve been getting lots of feedback on Anniversary Sale items.  I get the most e-mails about THE BRA and THE UNDIES, but there’s also been several clothing items that have stood out on the amount of feedback I’ve received.  This jacket is one of those items.

This jacket is special.  From the buttons on the sleeves to the tiny pleated peplum hem, it’s so stylish.  I sized up to a medium.  (I often size up to mediums in jackets.)  And here I am in the blush tee again.  It’s such a pretty soft color.  I’m wearing a small in the tee (which is true to size for me), and it’s a slouchy fit.  I’m wearing a 27 in the jeans, which is true to size for me. 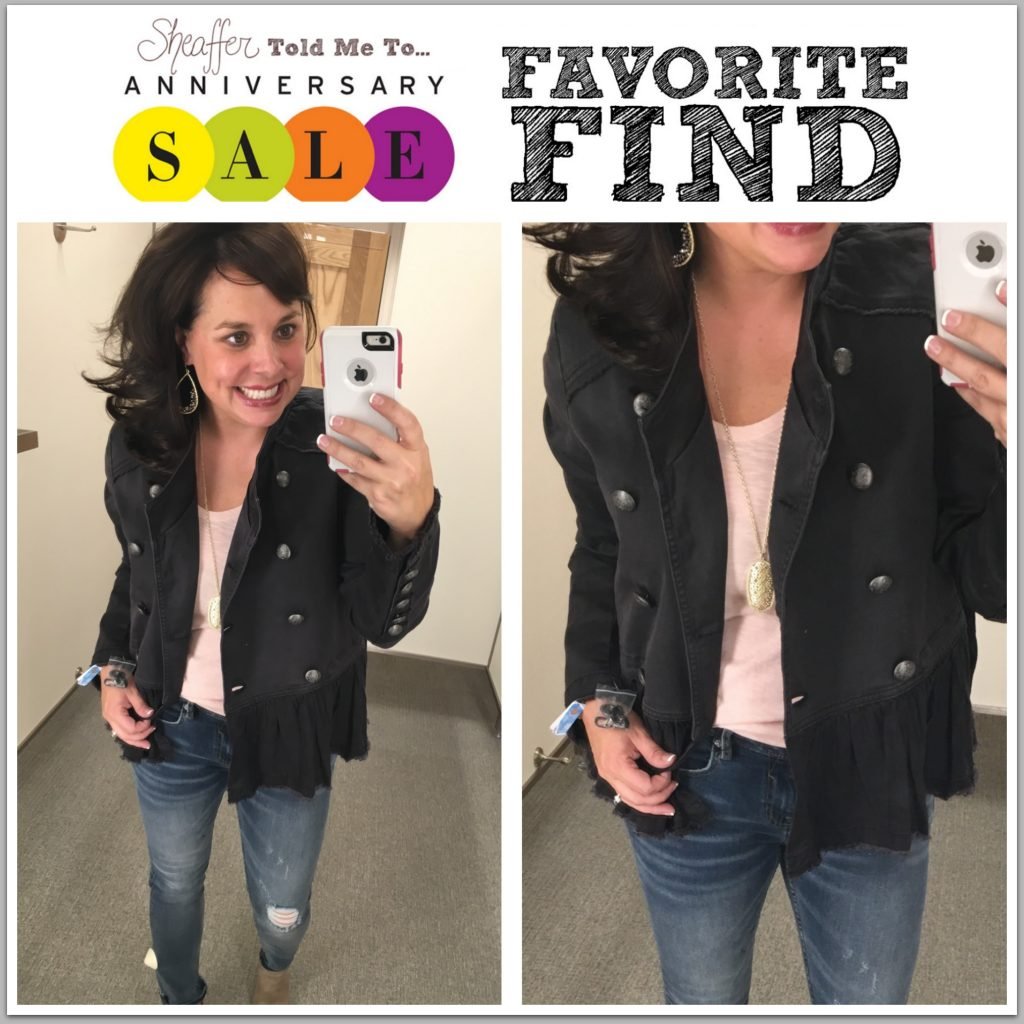 And if you didn’t catch Monday’s post, you need to go check it out.  Especially if you need a dress for an upcoming occasion.  Full reviews and sizing tips for each dress are on the post.  I also link the shoes and accessories! 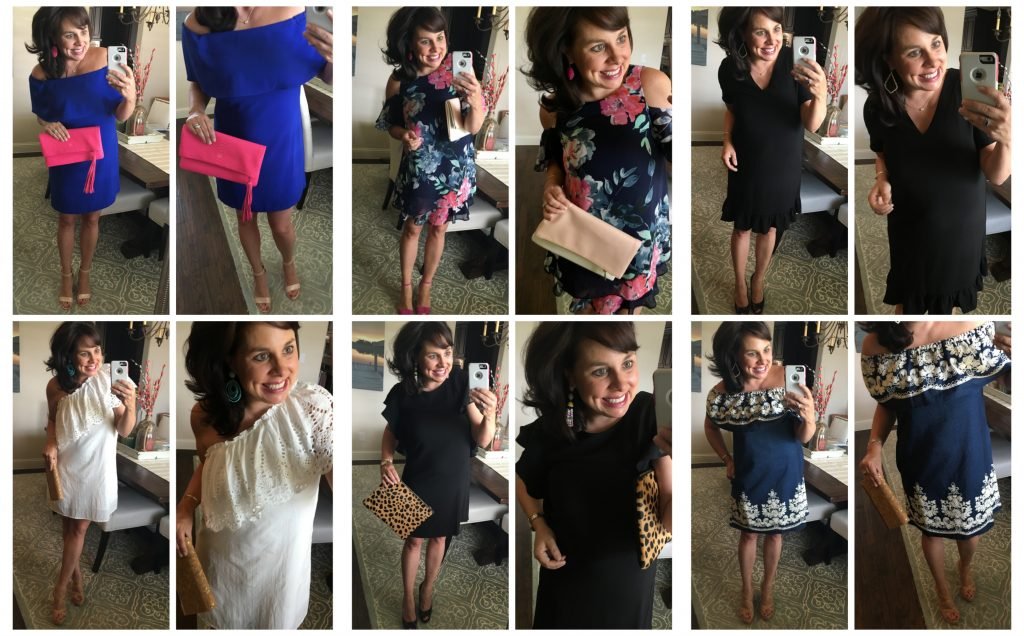 See y’all back here on Friday!

Filed Under: The Bachelor 19 Comments 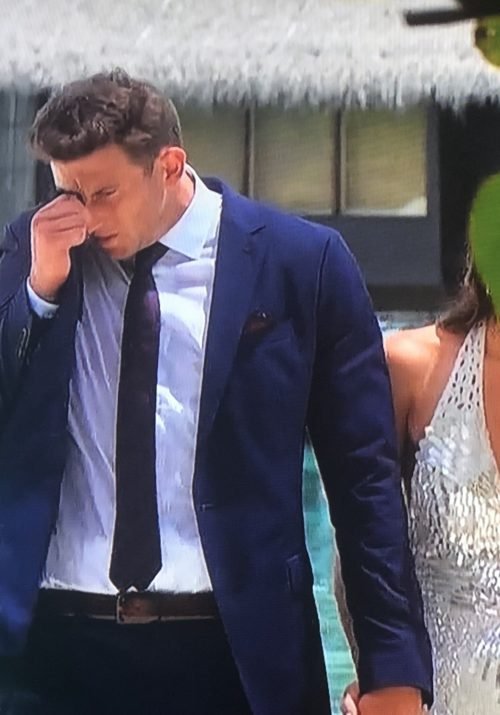 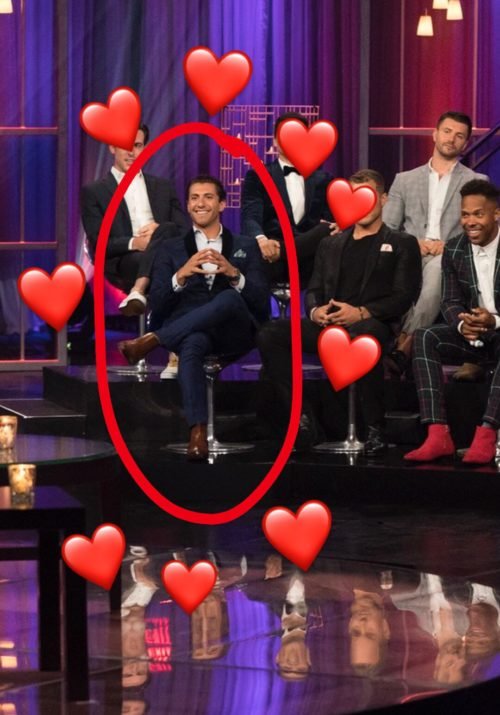 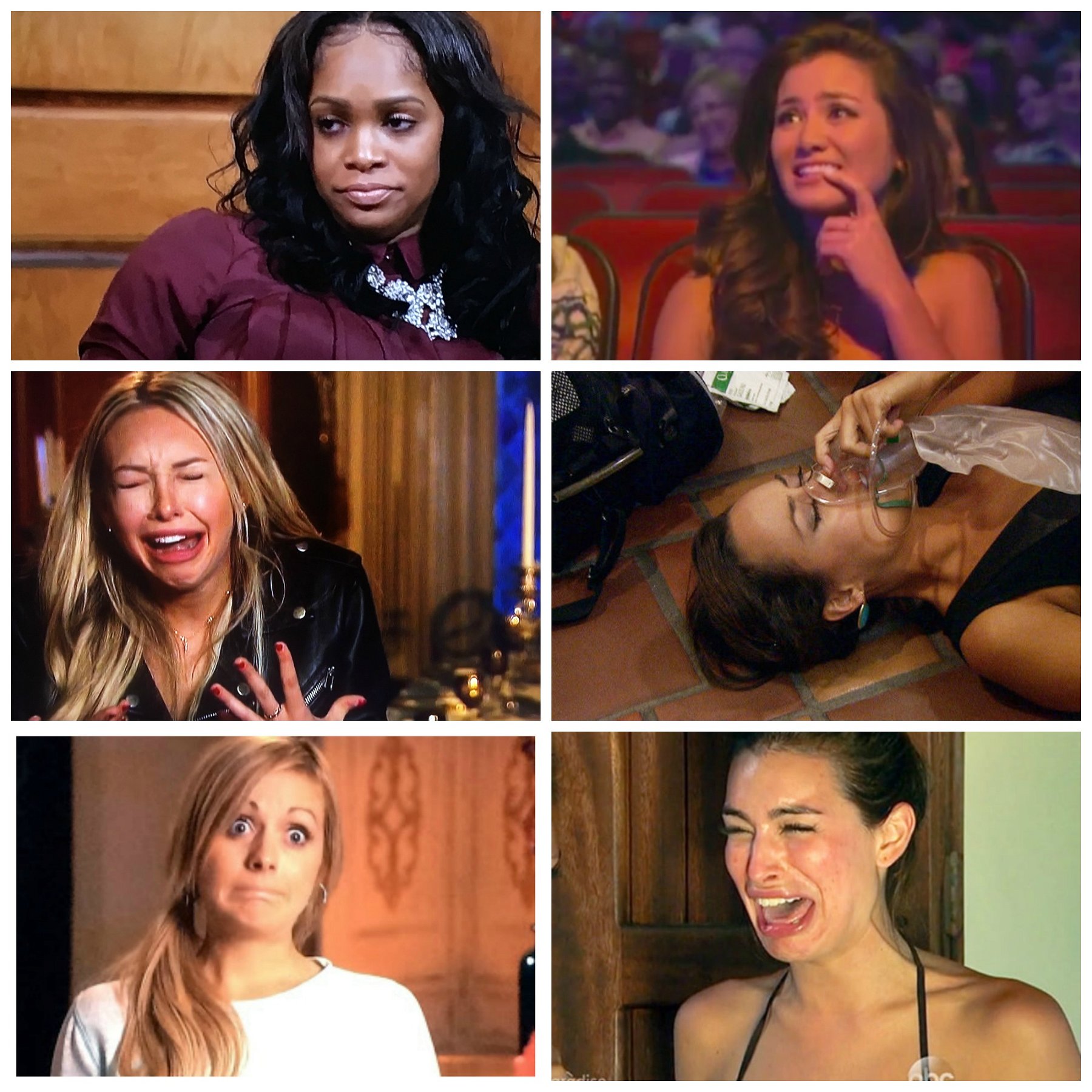