Hey Girls!
ALL ABOARD THE CRAZY TRAIN!
It’s time for Week 4’s BIP recap!
See the previous episodes recapped HERE.
Seriously, if you haven’t seen them, you don’t want to miss them.

I want to give a quick reminder that #textgate between Sam and Joe ended last week with Samantha accepting Justin’s invitation to go on a date.  Because she was done with…you guessed it….drama.
#youdon’tsay
So this week’s show started with Joe talking about Sam not liking him, and Joe said
“It’s not fair to Joe.”
Yes.  Yes he did.
I hate people talking in the 3rd person more than I hate those disgusting little strings on bananas.
And that’s sayin’ somethin.
#sheafferHATESbananastrings


*
Look how pretty #virgininabottle looks!
WOWZA!
Ashley, listen to me, whatever you did here, DO IT AGAIN.

*
In a quick turn of events, Samantha takes Joe aside and tells him that she doesn’t want to go on a date with another guy after all.  That she has in fact decided again that he (Joe) is the one.
And I feel realllllllllllllllllllllllly sorry for Justin.
But not because Sam turned him down.
But because nobody told him about the huge whitehead he had on the side of his nose.
Hey, we’ve all be there.

*
Chris Bugowski arrives on the island, and apparently it’s his 5th time on a Bachelor show.
Which is maybe a little pathetic.
#andwhenisaymaybe,imeantotally

*
Justin asks Amber to go on his date.
They walk the streets and then they salsa dance.
But I wasn’t as interested in the dancing as I was in MORE SUNSCREEN PLEASE.
The picture doesn’t do his burn justice.
#hewascrispy

Here he’s just praying that Amber won’t actually touch him because he probably feels like his skin is about to melt and/or flake right off his body.
#morespf

Amber and Justin got closer and closer while Salsaing.  Just act like it’s a verb.
Well, while Salsaing and copping some serious feels.
He grabs her hiney, they make out in the ocean, and then Amber starts to regret her decision to go on the date and make out because she’s starting to realize that she only has eyes for Dan.
Insert me rolling my eyes here.

Slow down Amber.
Dan then let’s Amber know that he doesn’t really feel like there is anything between the two of them.
He confides in Carly and says the only person he sees himself with is Sam.
#ofcoursehedoes
*
Back at the cabana, Chris B. drinks and drinks and drinks.
And drinks some more.
And then he almost catches himself on fire.
And then he asks Tenley on his date.
And she says no.
She says “no” in several different ways before he understands that she is in fact saying NO.
And it’s a whole mess of awkward.
Chris goes to sulk, and Joshua finds him, but not to confront him about asking Tenley out.
Instead, Joshua is all, If you aren’t going to use the date card, can I?
Joshua says yes.
Whoah.
He immediately seems to regret his decision, takes off his mic pack, and walks into the island jungle.
And nobody has seen or heard from him since.
jk
*
Joshua and Tenley head out on the date meant for Chris B.
They roam the streets of Guadalejara, and Tenley rocks a romper that most of us only wish we could.

They meet a professional chef at a Farmer’s Market and sample all of the local fare.
This is my idea of an awesome date.

They head to the chef’s restaurant where he prepares a beautiful meal for them.
But I will admit, I would have been all, “Um, do you got any queso por favor?”
In a nutshell, they are cute together….but I’m still not trusting Joshua for some reason?!?

*
#virgininabottle tells the camera that Jared has made it perfectly clear that he doesn’t feel a connection with her, but that doesn’t keep her from writing him a letter drafting a memoir of their time together and a 243 point proposal for why they should be boyfriend and girlfriend.
I’ll give her this, she’s a persistent little booger.
She claims she is more articulate when writing and that she is a “natural born writer”.
We’ll be the judge of that Miss Ashley.

As she’s handing him the letter, all I could think of  was…

*
Dan pulls Samantha aside so he can get some stuff about Joe off his chest.
She tells him that it was pretty much “love at first sight” for her with Joe.
And I’m confused.
I mean….really?
Joe walks up and pulls her away from Dan.  He takes her into the bushes and kisses her, and then returns her to Dan.  He did everything but pee on her.
When she gets back with Dan, he keeps trying to warn her about Joe.
Dan seems to think she is some delicate little flower.
Me thinks Dan is wrong.
Me thinks that Tanner might have a better read on Jade.
*
Time for the rose ceremony.
Girls are handing out roses this week.
My Name is Carly It’s Nice to Meet You gives her rose to Dr. Hunt.
Jade gives her rose to Tanner.
Tenley gives her rose to Joshua.
Juelia gives her rose to Meatball (who I’m just now noticing has dimples for days!).
Ashley S. gives her rose to Nick.
#virgininabottle gives her rose to Jared.
Amber gives her rose to Justin.
AND THEN IT’S TIME FOR THE FINAL ROSE.
Samantha is up.
She AGAIN talks about how she’s never ever been surrounded by so much drama.
#yeah,weknow
And OHHH EMMMMMMMM GEEEE she gives it to Dan.
I did NOT see that coming.
*
Samantha follows Joe out, and Joe starts to confront Sam.
And Sam talks in circles.
She says she lives her life based on the truth.
Right.  Sure you do.
And then he tells her she’s going to have a lot of cats.
Mmm, okay.
AND THEN SHE TELLS US AGAIN THAT SHE’S NEVER DEALT WITH SO MUCH DRAMA.
QUIT SAYING THE WORD DRAMA!
AHHHHHHHHHHHH!
In the rejection Tahoe, Joe slams a beer and warns that if he sees Dan out in the real world that there will be an altercation.  And then he shows the camera the text from Samantha that tells Joe to do whatever he needs to do to get the rose.  Joe, that would have had more impact if you would have shown it BEFORE you were leaving Paradise.
And then Joe says something that I won’t repeat because my parents read here.
#goodluckgettingadateafterthisbuddy
*
Samantha then goes in front of the group to plead her case.
And I know you’re not going to believe this, but she tells them that she’s NEVER BEEN AROUND SO MUCH DRAMA.
#iknow
#itwassounexpected
#excepttheopposite
And the Ashley S. gives us a little peak into the old Ashley, the one that we all know and love.
The psychotic one that talks in gibberish and doesn’t make any real since.
WELCOME BACK ASHLEY!  WE’VE MISSED YOU!
*
Chelsie from Huhwhan Pablo’s season is waiting for everybody after the rose ceremony.
The new people just keep coming!
She senses tension (smart girl) and decides to hold off on asking somebody on her date.
My Name is Carly, It’s Nice To Meet You sweeps her away and starts pitching Dan to her.
It’s now Carly’s mission in life to get Samantha and her siren song OFF THIS ISLAND.
*
NIGHT 2 opens with another nod to friends when Tenley pees on Juelia’s foot after she got stung by a jellyfish.  Remember when Chandler couldn’t step up?

*
Nick goes to talk to Ashley to tell her that he’s just not that into her, and she
lets her crazy hang out again.
She becomes enraged at the fact that he came to talk to her while she was washing her face.
Enraged.
#iknow
#shestillcray
She gives him a death stare that literally terrified me and yet filled me with joy at the same time.
*
Mackenzie shows up.
If you need a refresher course, she’s the single mom from Prince Farming’s season who loves aliens.
She asks Justin on her date.
There was mud, smoke, flowers, tribal dancing of sorts, and kissing.
And then they were pronounced husband and wife.
And I think a small part of Mackenzie actually thinks they ARE married.
And then Mackenzie wondered if they were to have children if the children
would be considered Mexican.
I can’t make this stuff up. 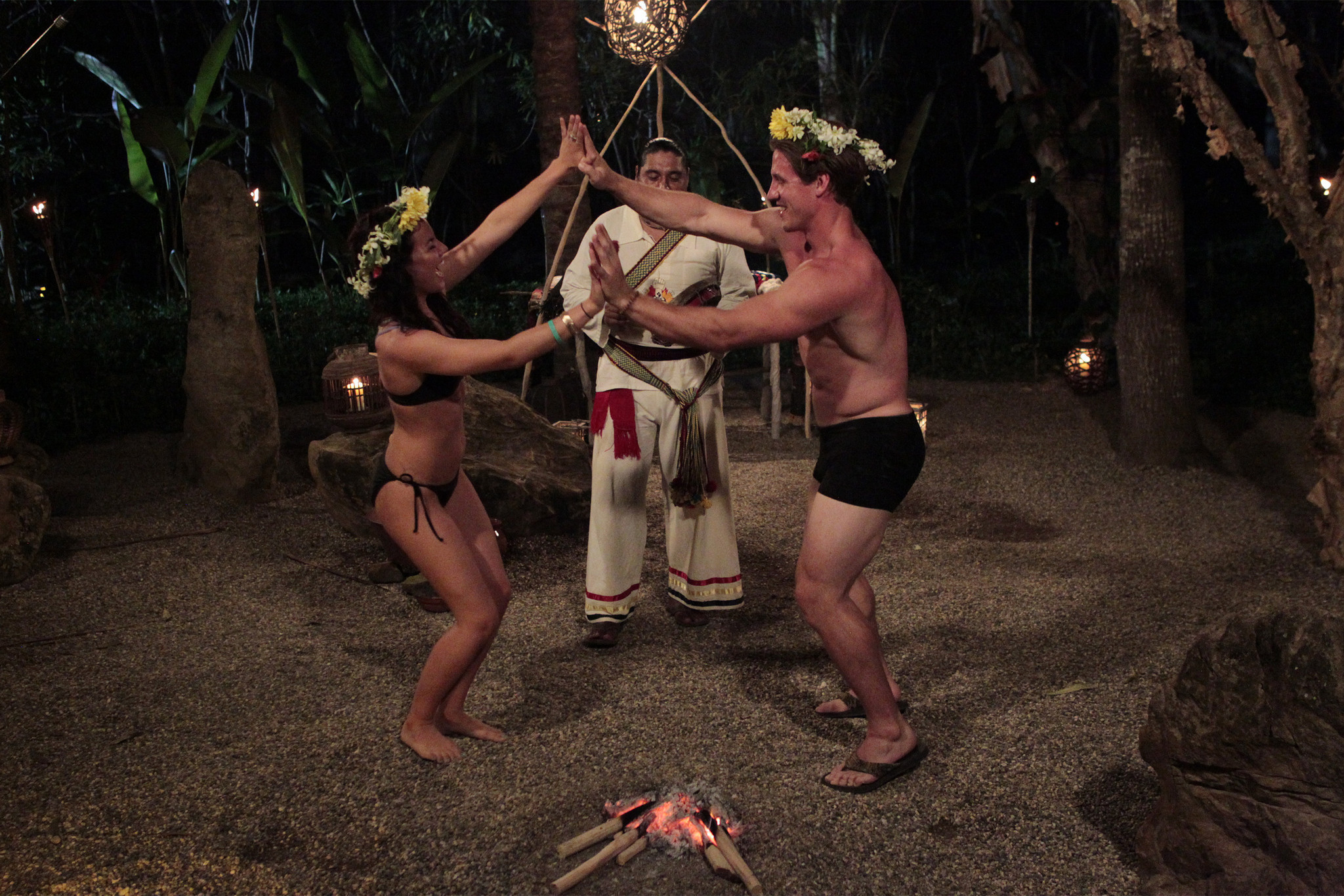 *
ANOTHER girl shows up.
Harrison, is there a clown car in the back filled with girls?  They just won’t quit coming!
It’s Jaclyn.
I don’t remember anything about Jaclyn, but gauging from how she made her entrance on the island AND WHAT SHE WAS WEARING, I think it’s safe to say that girlfriend does not give a #&$@.
Exhibit A your honor.

Exhibit B your honor.

And the way she is talking she kind of reminds me of Kit from Pretty Woman.
#ohyo
#ohyo

*
Jaclyn starts trying to put her claws into Jared, and #virgininabottle panics.
She scurries off to find Harrison and tells him that she needs to have an overnight date with Jared.
Uh oh.
ASHLEY! NO!
NOTHING good can come of this.
HAVE SOME PRIDE WOMAN!
HARRISON!  DON’T GIVE HER AN OVERNIGHT DATE!!!

Here are the 2 main reasons that the overnight date shouldn’t happen:
1)
If she goes through with “the deed”, WHAT ARE WE GOING TO CALL HER?
Just plain #inabottle  ?????
That’s no good.
2)
JARED.
I BEG OF YOU.
YOU KNOW THE GIRL IS UNSTABLE, SO PLEASE TAKE THAT INTO ACCOUNT.
I have 3 words for you:
STAGE.FIVE.CLINGER.


The episode ends with previews for next week and OH MY AT THE TEARS.
Samantha better get ready, because (spoiler alert) although I know she prefers not to be around it, it looks like there could possibly be some drama.
Now, if you didn’t see yesterday’s post.
YOU HAVE TO.
YOU MUST.
Click HERE.
#you’rewelcome

Filed Under: The Bachelor 35 Comments

Bachelor in Paradise Finale Recap: THESE ROSES ARE SERIOUS BUSINESS

Bachelor In Paradise Week 3 and SMALL SPACES with Nordstrom!