Did you see Part 1 of Hometown Dates?  If not, click over HERE and get up to speed!  You definitely need to read all about the CRAZY that was Kendall’s hometown.  For example, this little fella was there. 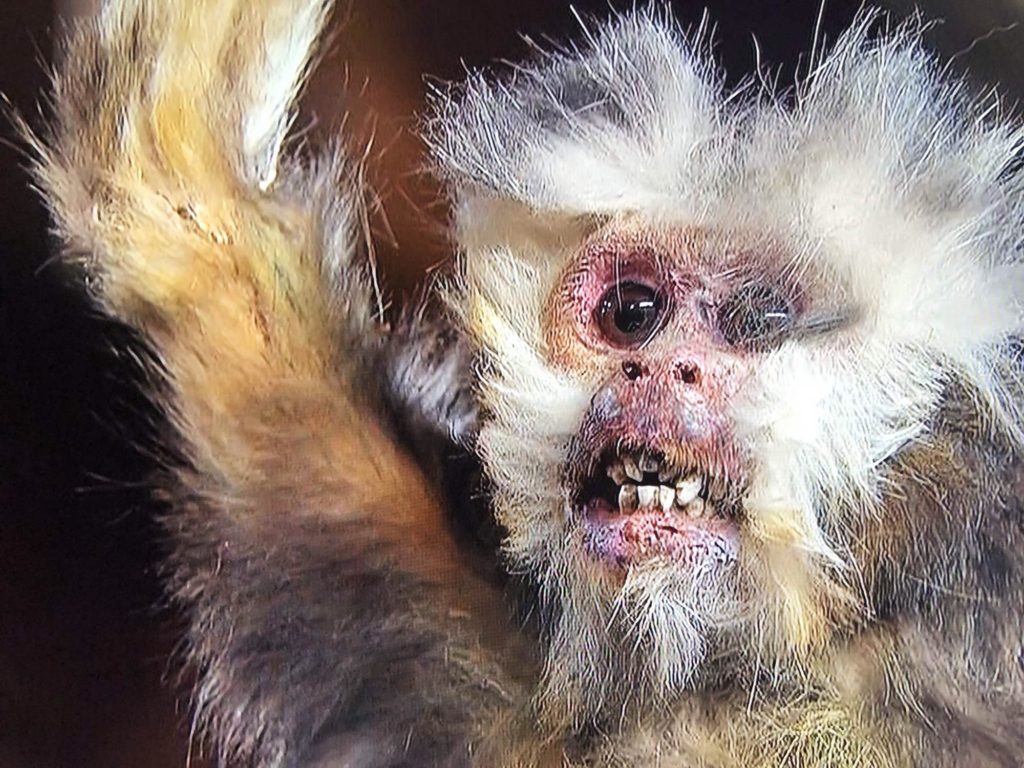 After visiting Kendall’s and Tia’s family, it was time for the hometown date with Becca in Minnesota!  She hopped up and performed a beautiful straddle in the middle of an apple orchard.  I gave it a solid 10. 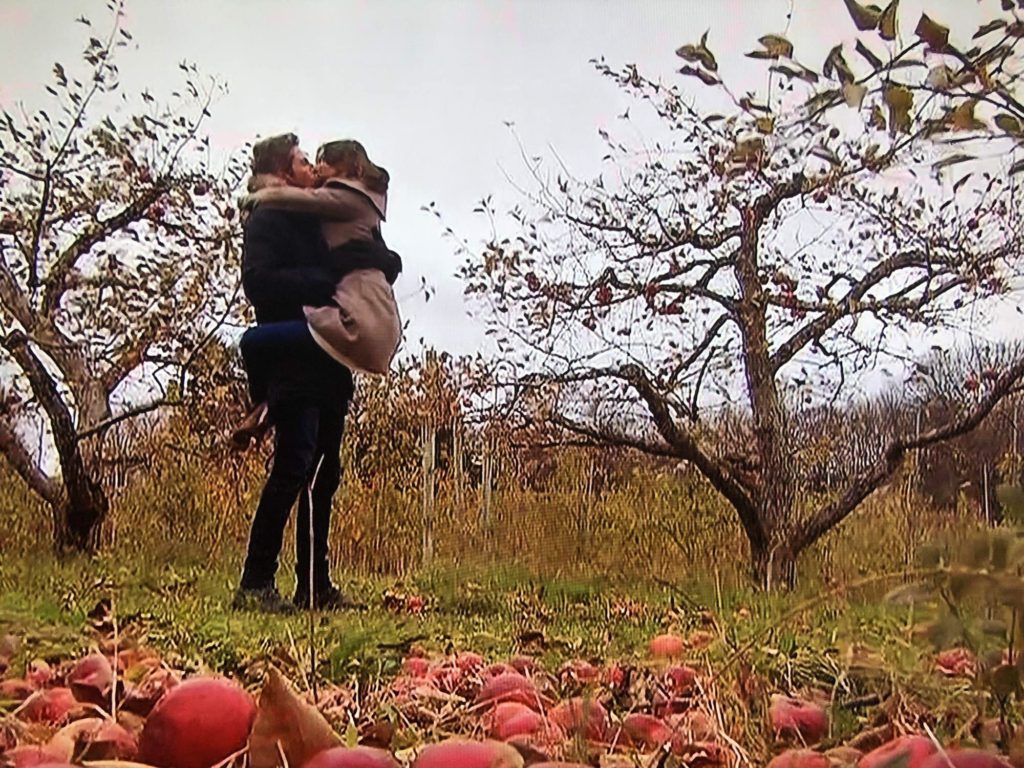 And I will say this.  Becca should ALWAYS wear a red scarf.  And while she’s at it, she should always frolic in an apple orchard.  The girl was in her element and looked GORGEOUS. #imighthaveagirlcrush 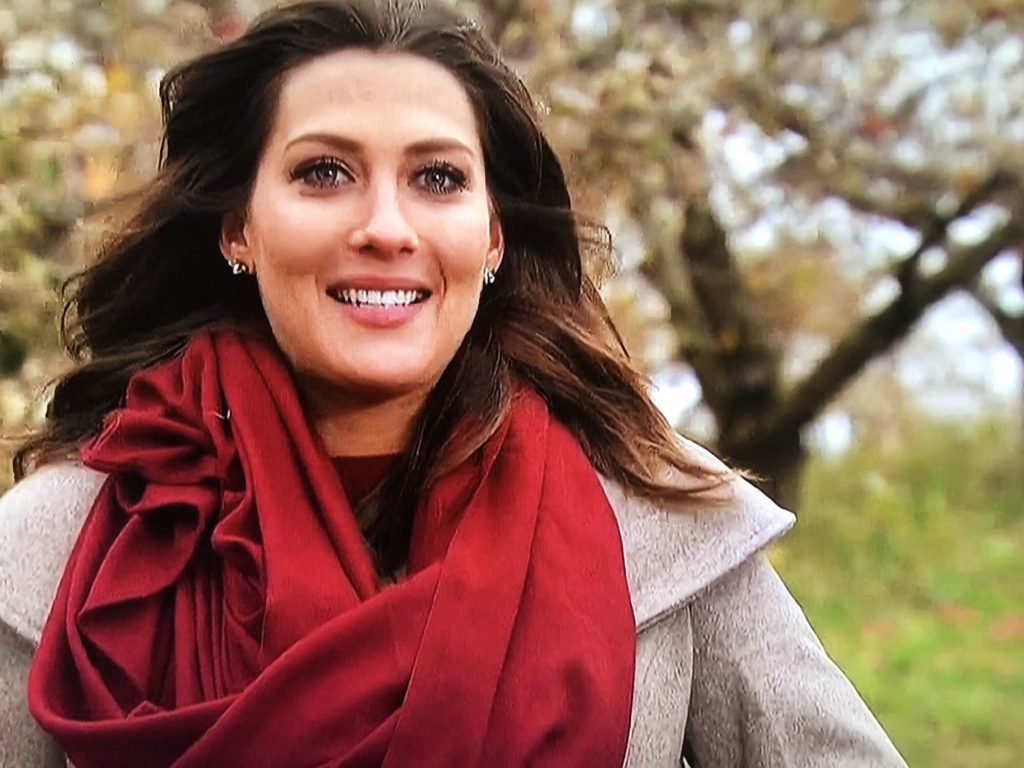 They picked apples together and looked DARLING while doing it.  And then they did various apple centered activities.  It was all sorts of cute until Arie started throwing apples in her basket.  When he was throwing them in there, it made me think of the one checker at Market Street that always man handles my apples.  And I’m like “LADY.  Those Honeycrisp are $4.29 a pound, treat them with respect.” 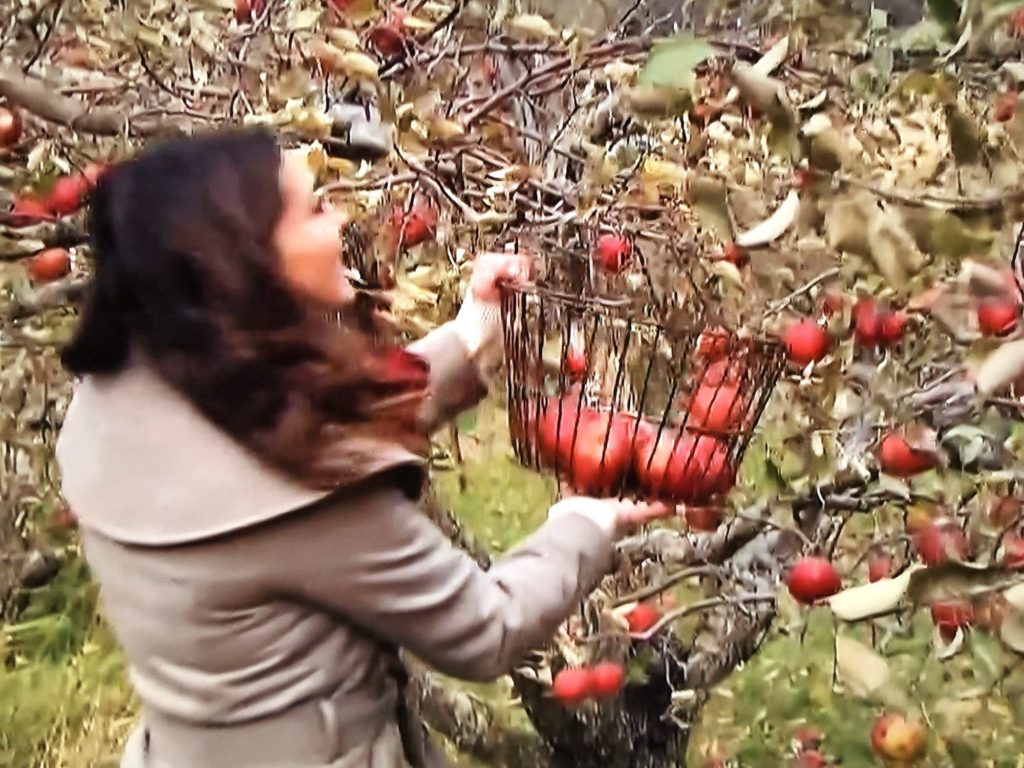 Becca’s family made small talk for like 14 seconds, but they got down to business pretty quickly.  When Arie described the Bachelor experience as dating tons of women and then hopefully ending up with 1 as being “really beautiful“, Uncle Gary (the uncle that became like a father figure to Becca after her dad died) had to close his eyes to try to process what he was hearing.  And look at the aunt’s face too.  HYSTERICAL. 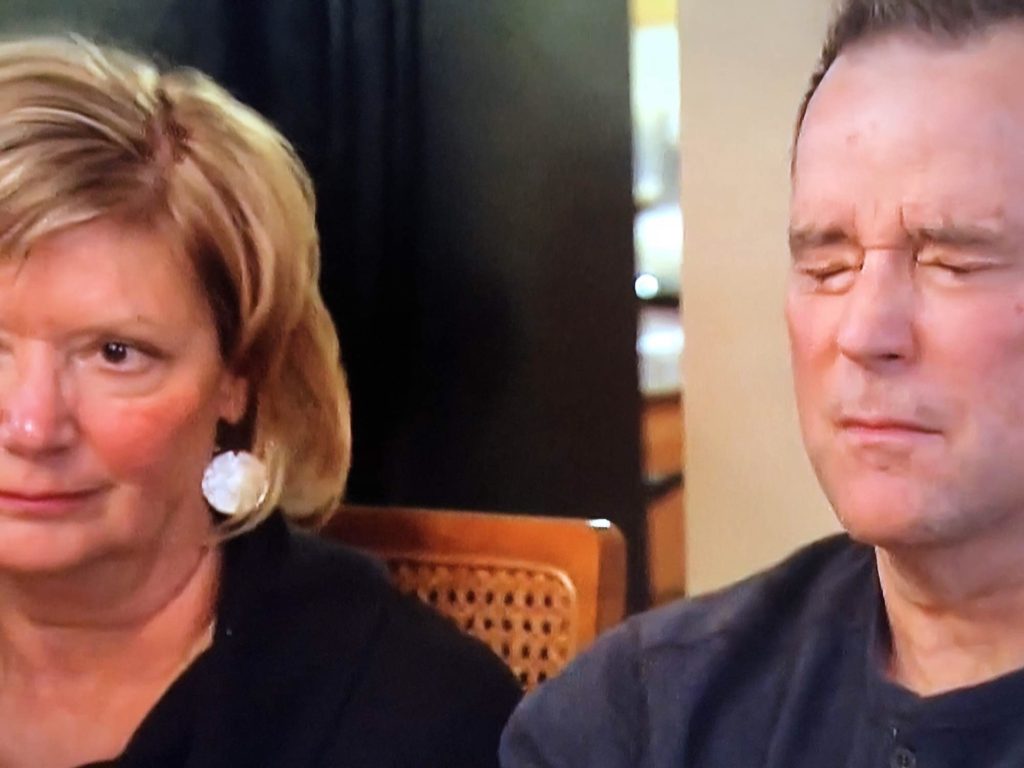 Uncle Gary asked Arie to join him in the other room.  To be honest, before they even sat down and started really talking, I was afraid he was going to whip him with his cane. 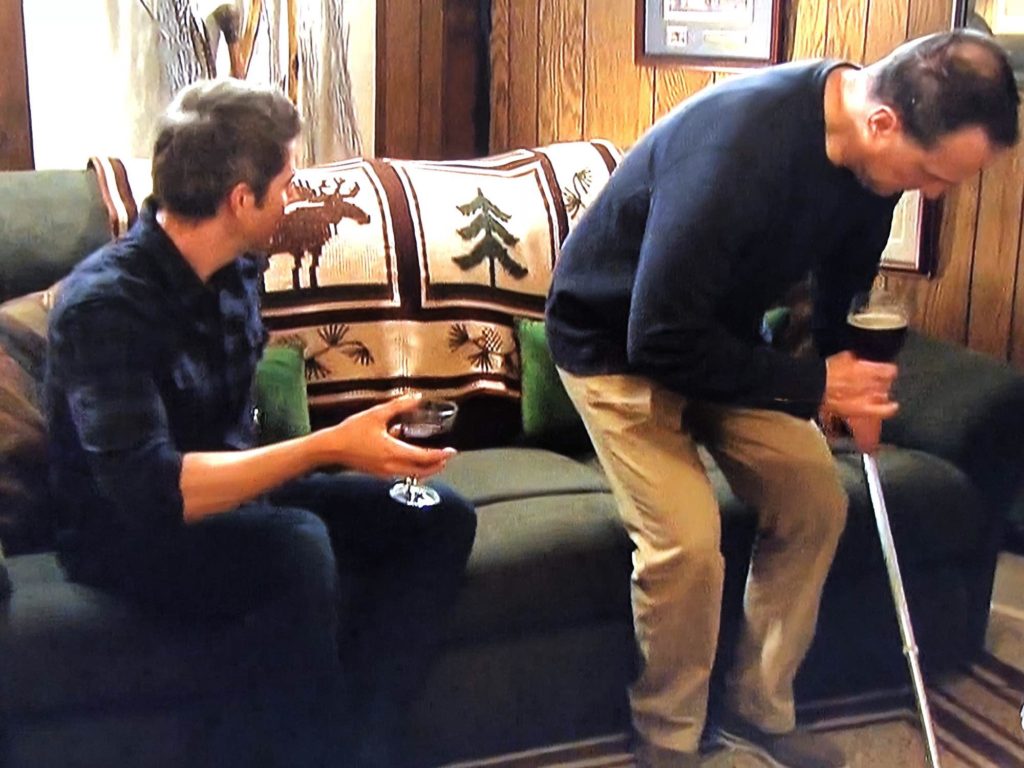 But just like all of the other family members we’ve met during hometown visits thus far, Uncle Gary ended up being a softie.  He talked a lot about Becca’s dad, and Arie’s reactions to what he was saying were actually quite genuine and sweet.  I really appreciated the respect that Arie showed Uncle Gary during this time, and his feelings of sadness for Becca over the loss of her father seemed very real. 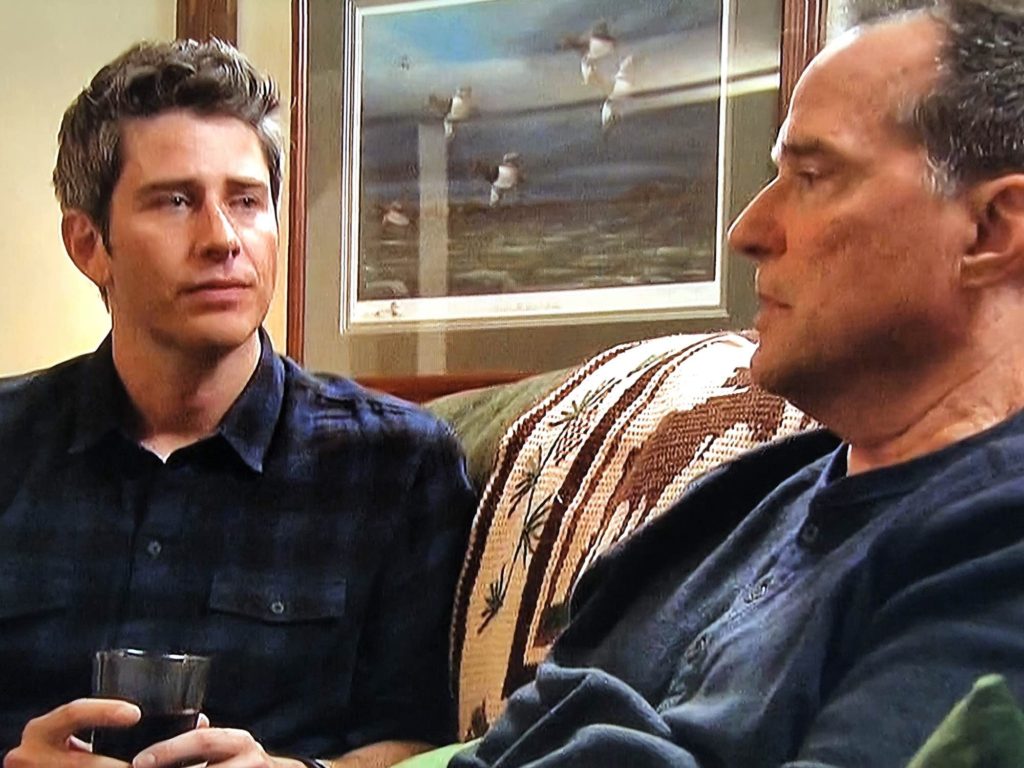 AND LET THE RECORD SHOW, when Uncle Gary talked about how hard that the death had been on Becca, Arie responded with “I hate that (for her).”   After the many many times we’ve heard Arie say “I love that” this season, “I hate that” was actually a welcome change.  And unlike “I love that”, which makes me think he isn’t even listening….”I hate that for her” actually tugged at my heart strings a bit.

And then Uncle Gary started asking some really great questions, and I WAS THERE FOR IT!  He asked, “If Becca wanted to go to church, what would you do?”  Arie said “I’d go to church with her.  We’ve talked about it, and I know she’s further along spiritually than I am, but I’m open to it.”  And again, his answer sounded genuine, and I believed him!

Becca had some time with her mom, and when we she asked her mom if she would give her blessing for an engagement, her mom first gave a firm NO M’AM.  But she caved too, and in the end just told Becca she trusted her judgement. 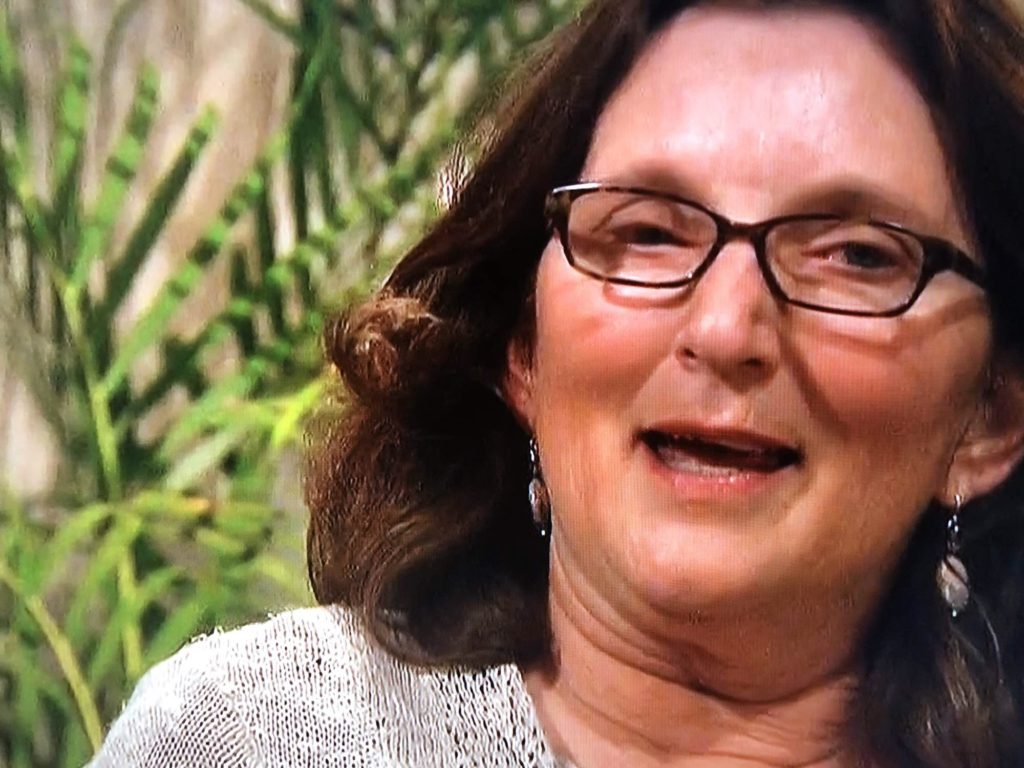 Summary:  Becca’s family is wary of Arie and his kissing bandit ways, but they trust their daughter.

And to review, yesterday I said the exact same things about both Kendall’s and Tia’s families.

And then it was time for Lauren’s family. When thinking about this hometown, I wondered if they would just all sit there in silence, staring at each other while looking pretty, and occasionally saying “wow”.

I’ll tell you this, THE APPLE DOESN’T FALL FAR FROM THE SILENT TREE.

But, first things first.  Arie showed up in a blue button down and blue pants.  I mean.  WHAT IS  UP WITH THE BLUE, MAN?  #blueishissignaturecolor 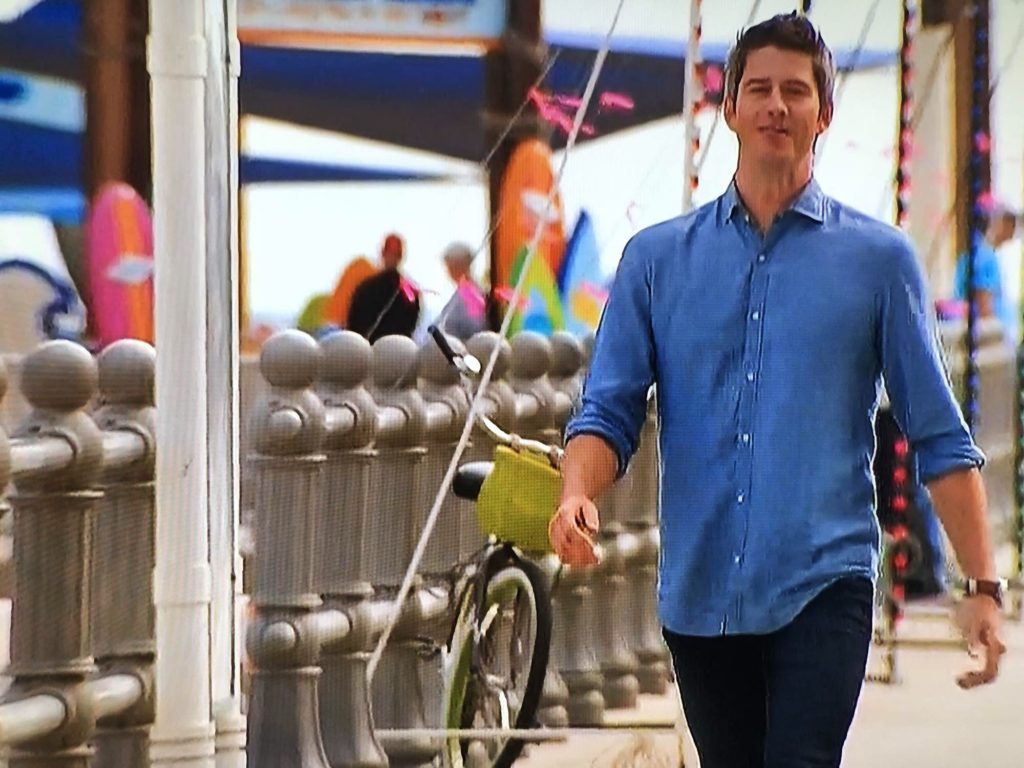 Lauren’s outfit confused me a bit.  It seemed very New Kids On the Block-ish.  We’re talking a crushed velvet bodysuit (from 5-7-9 is my best guess) and a flannel tied around her waist. #listenupeverybodyifyouwannatackeachance #justkidontheflooranddothenewkidsdance  #joeyforever

They rode horses down the beach and then went up to catch the view from a lighthouse.  And they made out.  Like hard core made out. 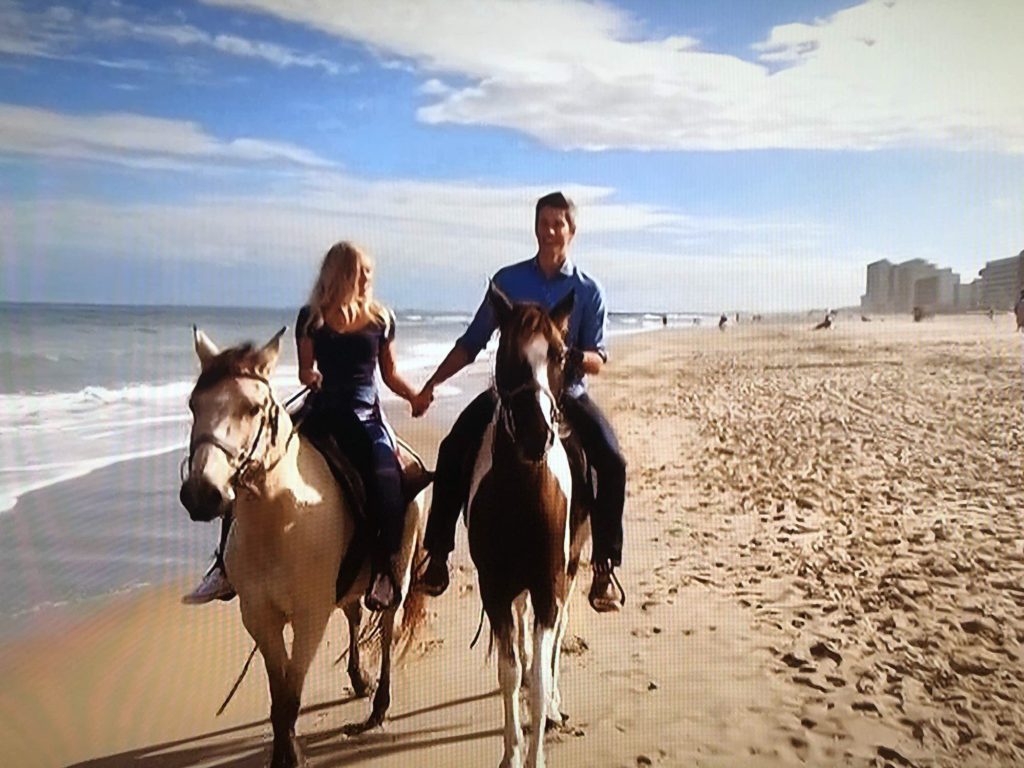 They headed to her family’s house, and Arie was VERY nervous.  With good reason.  Dad is a retired fighter pilot, and Arie assumed he was going to be a hard sell.  Arie hugged everybody and then they sat down across the room from each other.  But although they were just across a room..they seemed light years apart.   LIGHT YEARS. 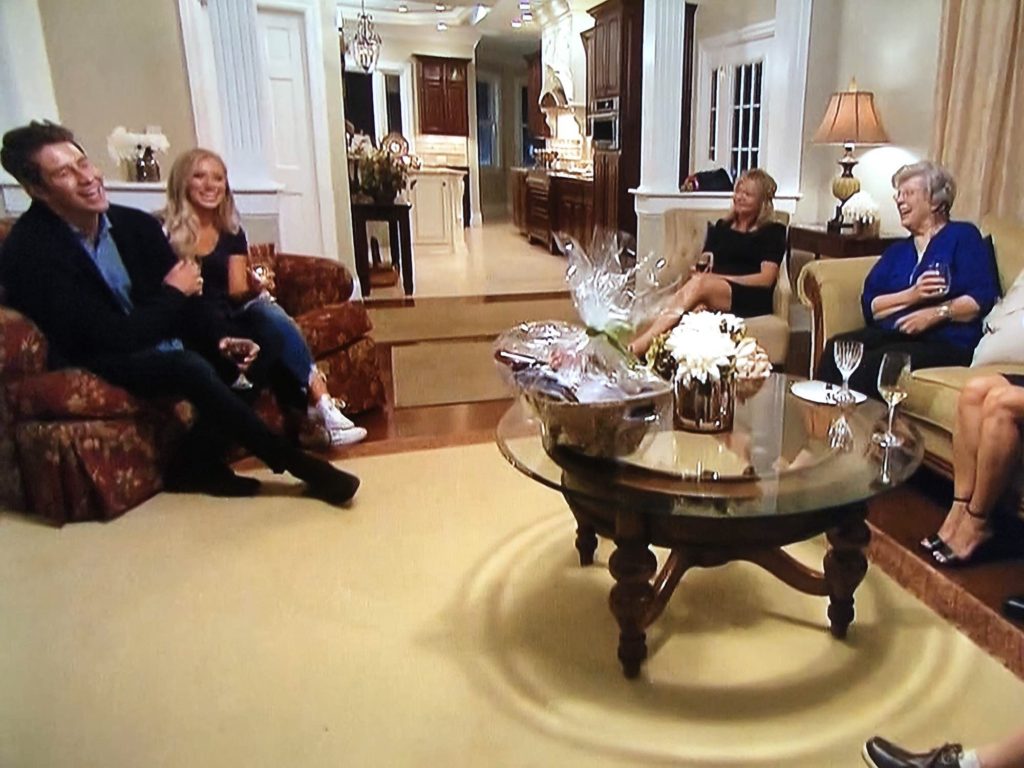 The aunt asked Arie to say something in Dutch.  And when he did, the reaction was terrifyingly awkward silence.  After they were quiet in the living room for awhile, they decided it was time to head to the dining room for some more quiet time.

So they headed into the dining room for some food and some more terrifyingly awkward silence.    It was bad y’all. So bad that Arie had to step away from the dinner table to blot the sweat off of his face. That makes the second time Arie has just left Lauren with little explanation at a dinner table. 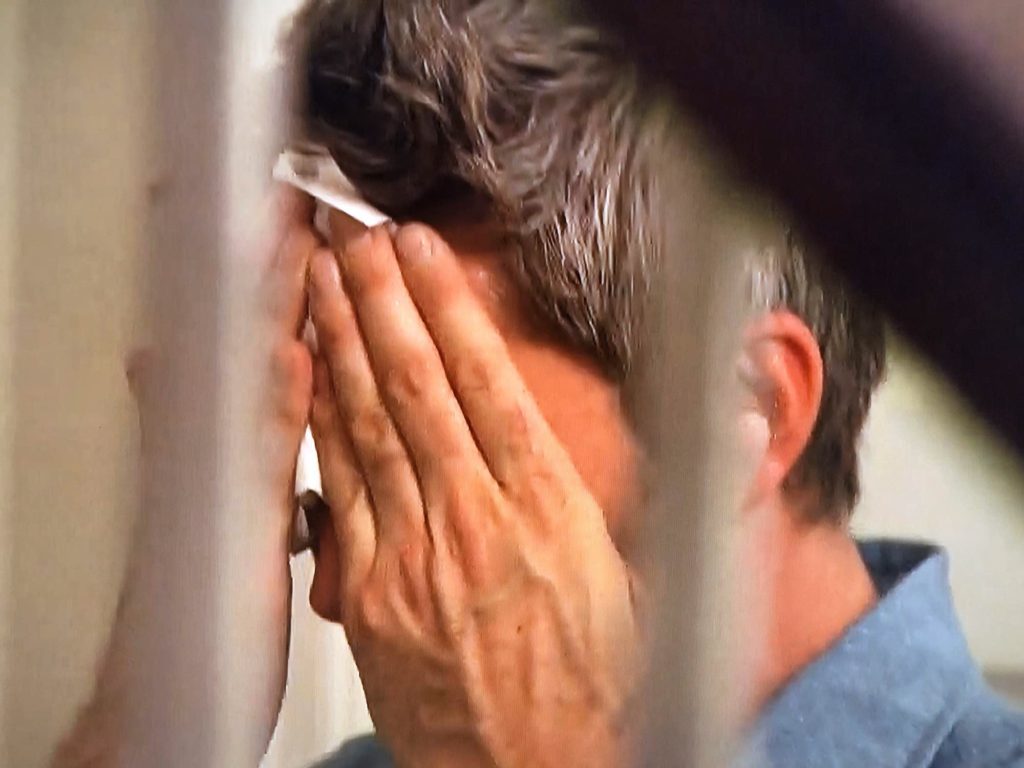 And then it was time for a little 1:1 with Dear Old Dad.  I’ll admit, I was scared for Arie. Dad was ex-military, and he didn’t seem to be the kind that was going to drink the Arie Kool-Aid.

They sat down, and Arie immediately thanked him for his service.  And then Arie shared that in 2008 he went over to Iraq for a good will tour with some other drivers and hung out with the soldiers.  Dad wasn’t just impressed, you could tell he was genuinely touched.  And I’m telling you, Lauren’s dad became the president of the BIG OL’ TEDDY BEAR CLUB. 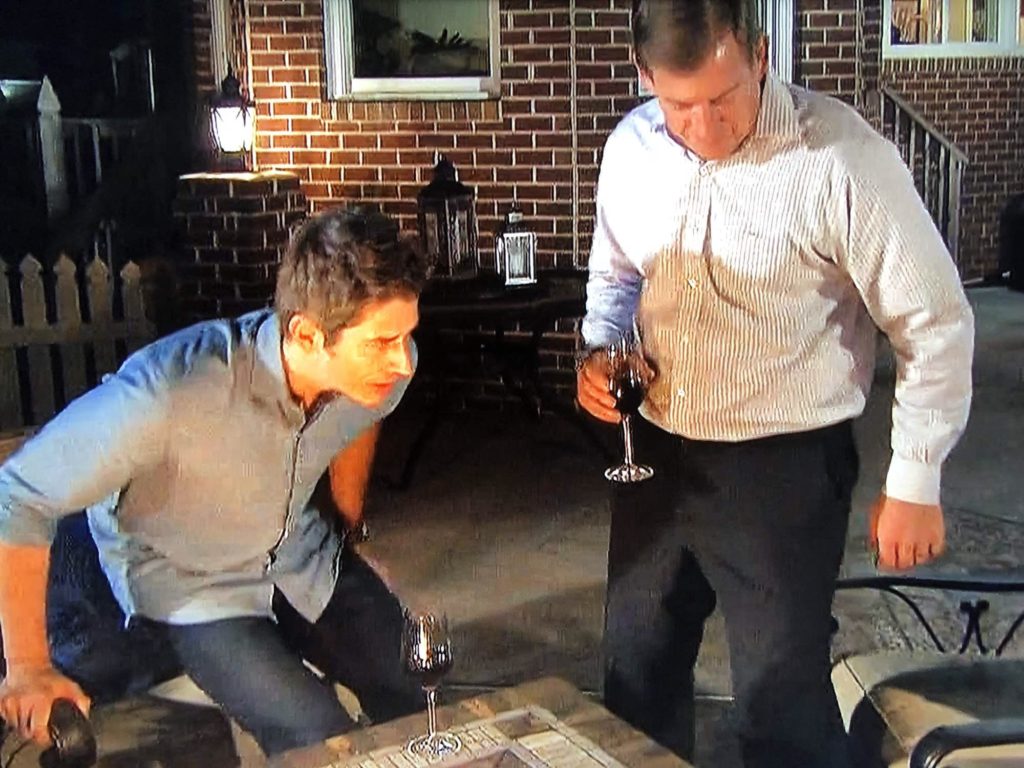 Dad said, “Lauren is smart, and I don’t really worry about her picking the wrong guy.  She won’t commit if she’s not sure.  And if she likes you, I’ll like you.”

But he followed that with “I like him a lot, but if he proves me wrong I’ll f*^&@ing kill him.”  Well, allrighty then. 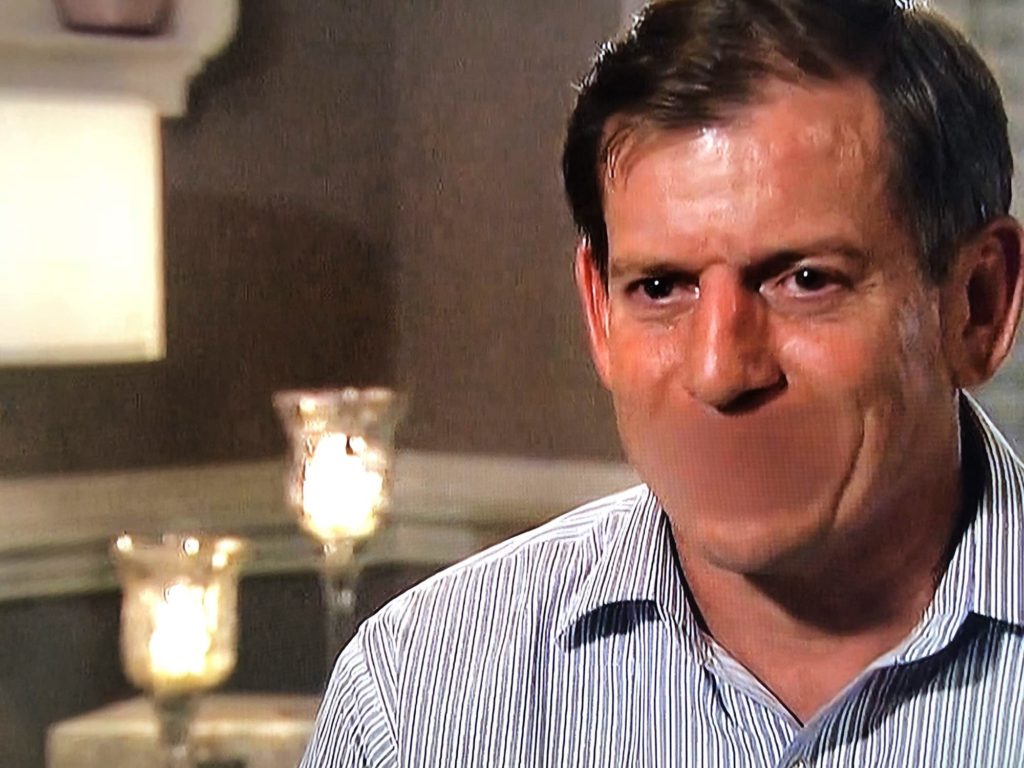 Next, Arie sat down with mom.  And he immediately told her he was definitely falling in love with Lauren.  When asked directly if he was compartmentalizing the women, he flat out said “yes….because he had to.”  Mama didn’t like that answer very much, but I appreciated the honesty.

Lauren sat down with mama.  Mama shared all of her concerns, and Lauren shot all of them down.  She insisted that she was falling in love with Arie, and that she fully believed that Arie was falling in love with her too.  When we got to spend time with mama, it became clear who Lauren gets her dazzling personality from.  (For what it’s worth, I do believe Lauren is probably getting a bad edit and that she’s actually much more fun than we see.) 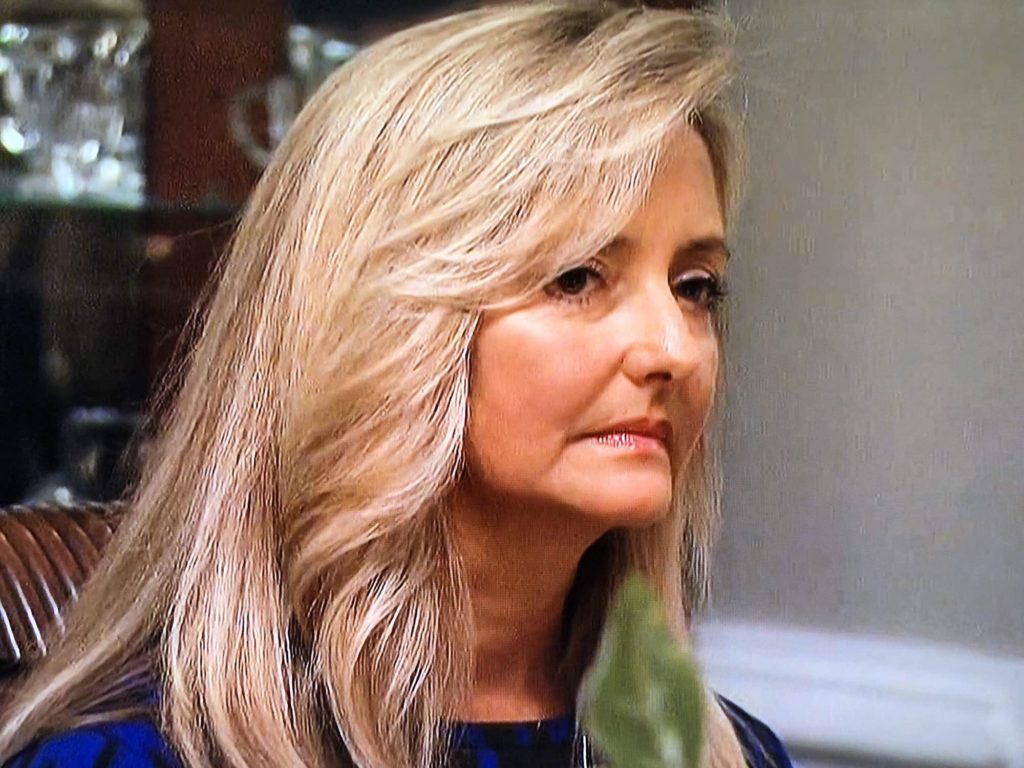 Summary:  Lauren’s family is wary of Arie and his kissing bandit ways, but they trust their daughter.

So, if you’re keeping score, all 4 families said that they were going to trust their daughter’s judgement. 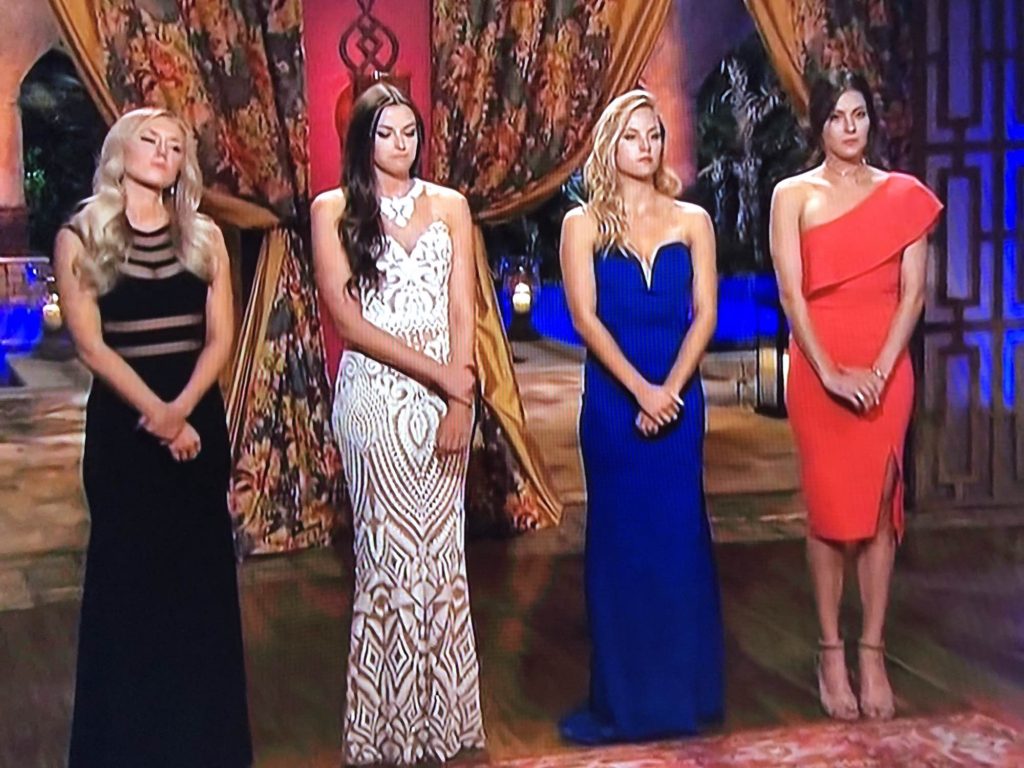 Cut to Arie, saying “I fell for all of them and I can see my life with each and every one of them.”  That’s right, he arrived at the rose ceremony not yet knowing he was going to send home.  He did however know that he was FULLY COMMITTING to the idea that his signature color is blue. 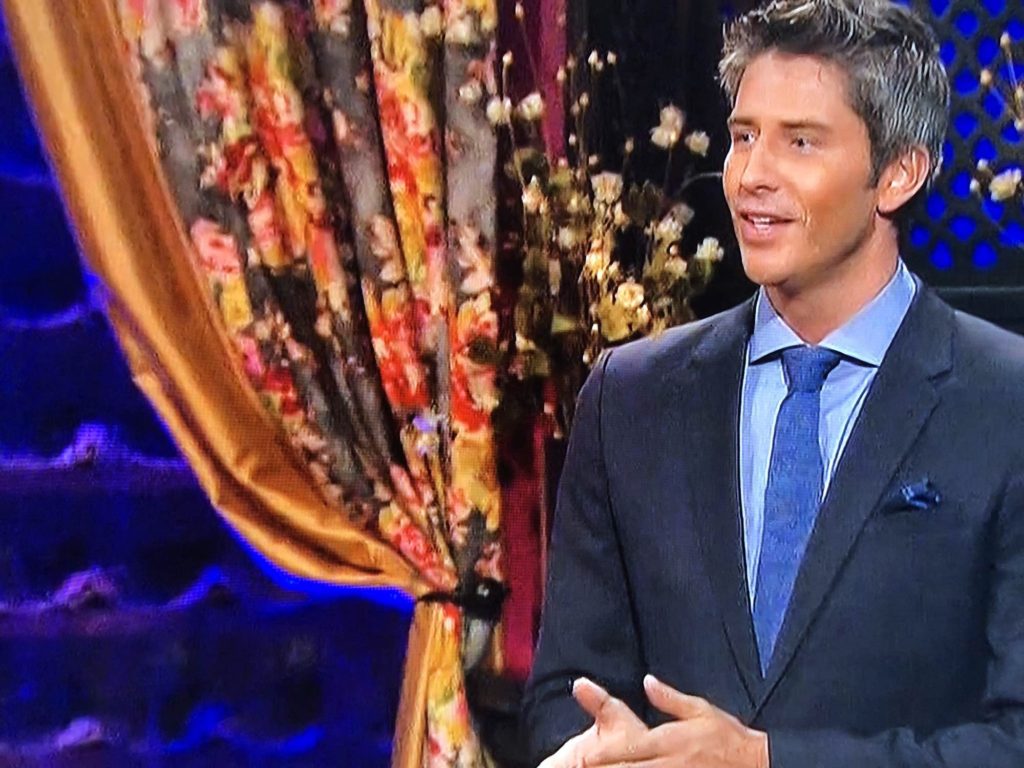 Arie walked into the room with the ladies, he started to FREAK THE FREAK OUT, and he had to ask to be excused. 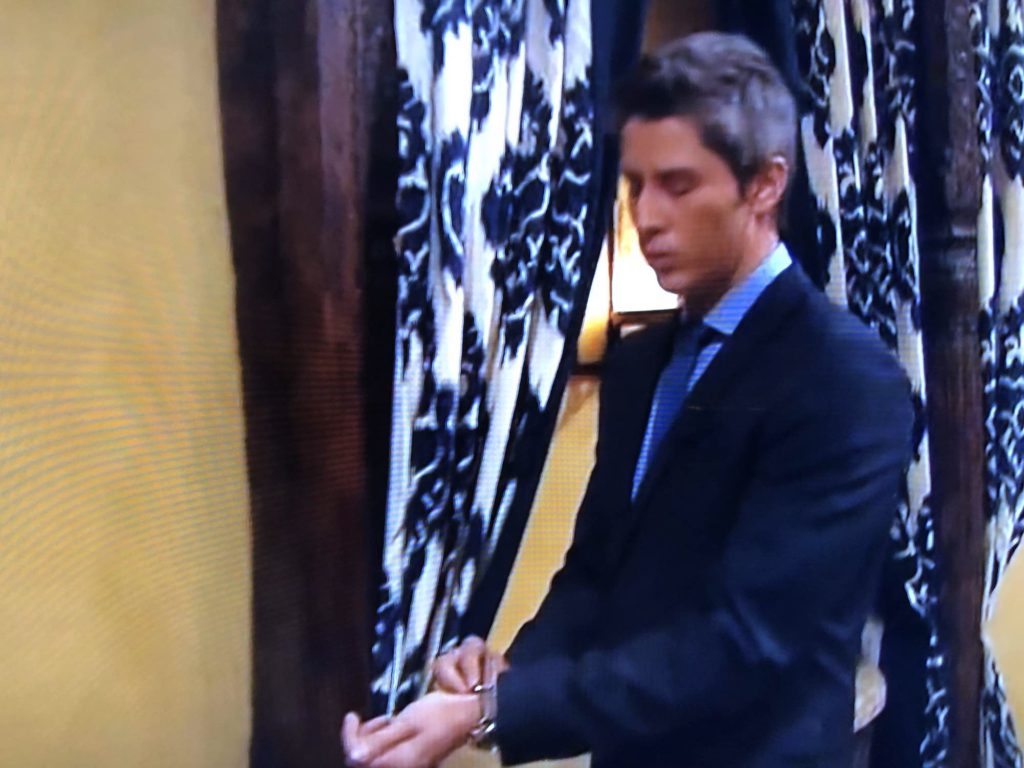 When he walked back in the room, he asked Kendall if he could steal her away for a moment.  I imagined he was going so to say, “I really like you, but if I’m going to keep you around, you need to tell me right now THAT YOU WILL NEVER STUFF ANOTHER ANIMAL AGAIN.  PINKY SWEAR.”

But that’s not what he said.

They had a very real conversation, and Arie was just really trying to get an idea of where her head was.  He said, “If you stay, somebody else goes that is definitely ready for marriage.”  She said “I love the way you make me feel.  I love that I can be so open and vulnerable with you.”

So, he basically said “I need you to tell me that you are ready to get married for me to decide to give you a rose.”

And she basically said, “I cannot tell you that.”

And he basically said, “Good enough.” 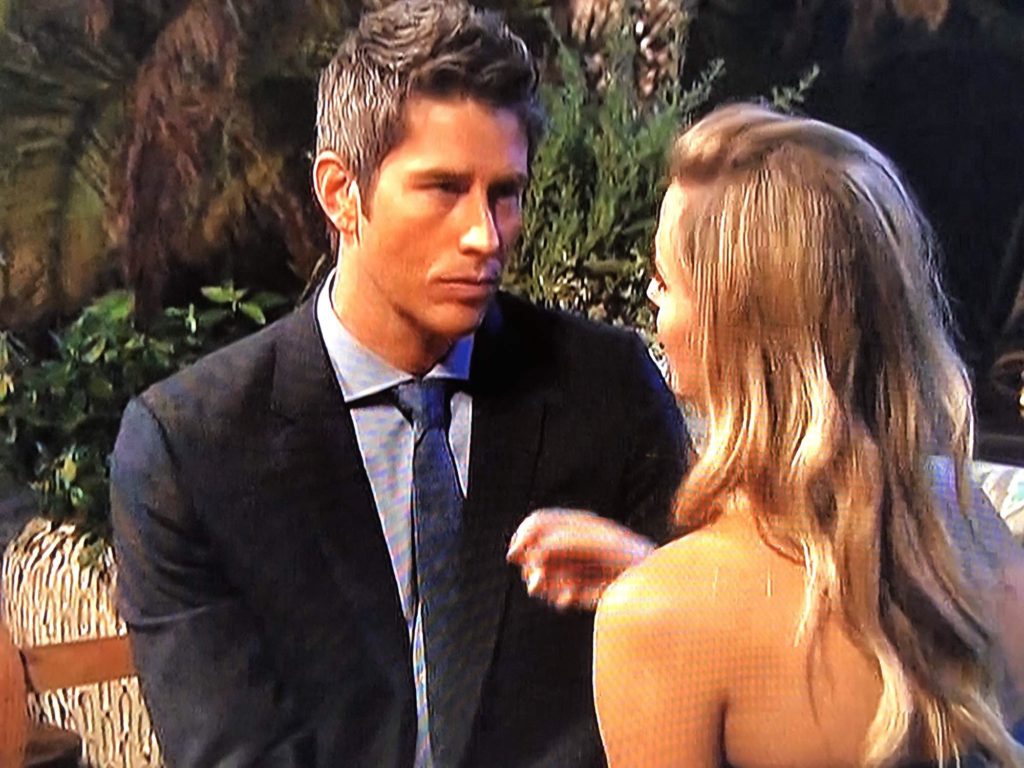 And when Arie was talking to Becca, this is what Tia looked like.  Homegirl was REELING. 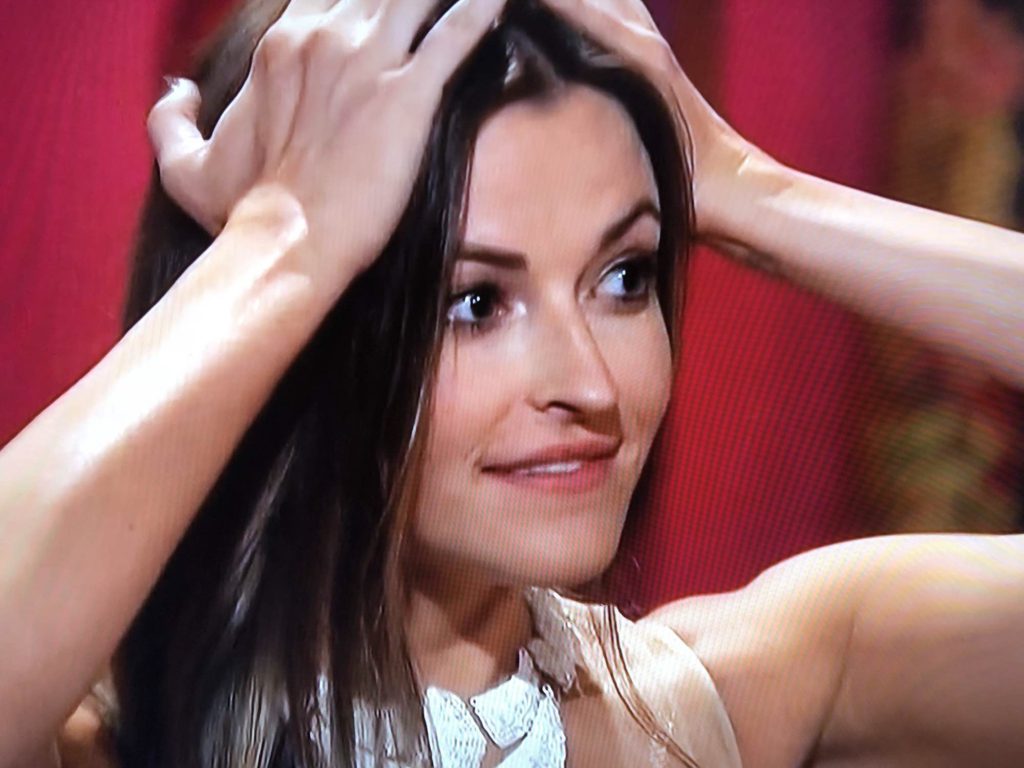 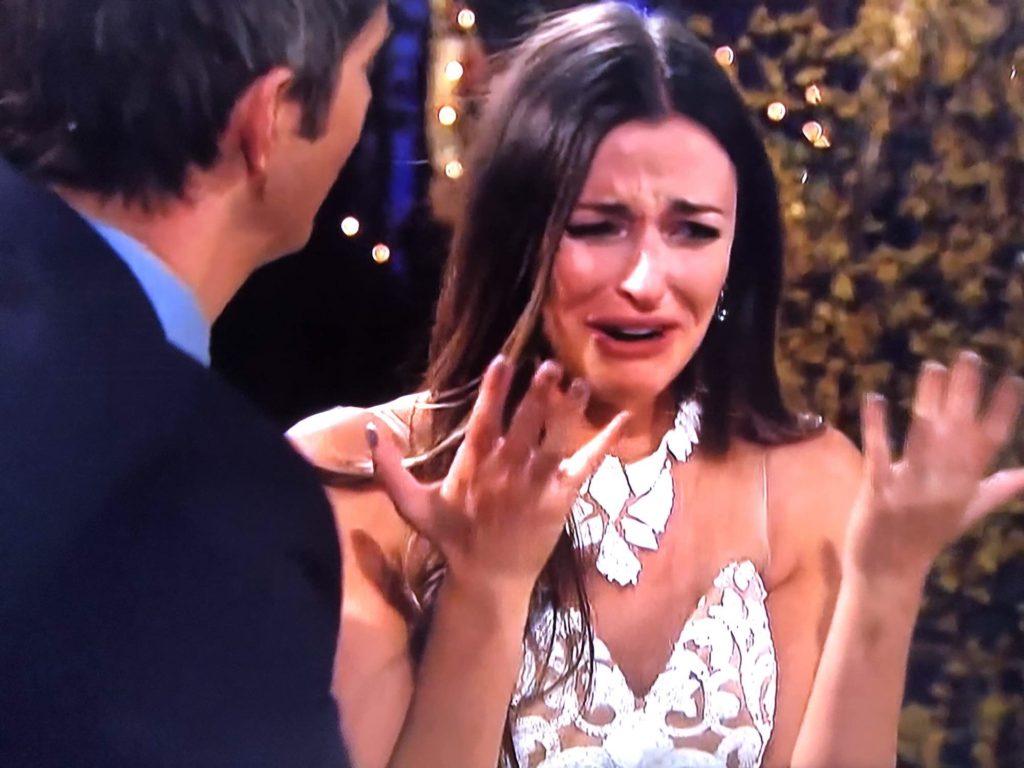 Somewhere in Arkansas, Tia’s dad was firing up his desktop so he could start googling like a mad man.

And that was it for this week.

BUT Y’ALL.  NEXT WEEK LOOKS EPIC.  And I’m not just saying that.  THINGS ARE GOING DOWN NEXT WEEK.

Our favorite cowl neck is stocked again in turquoise!  And it’s 40% OFF! 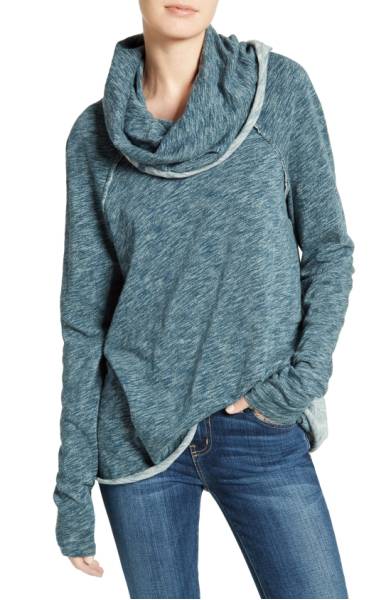 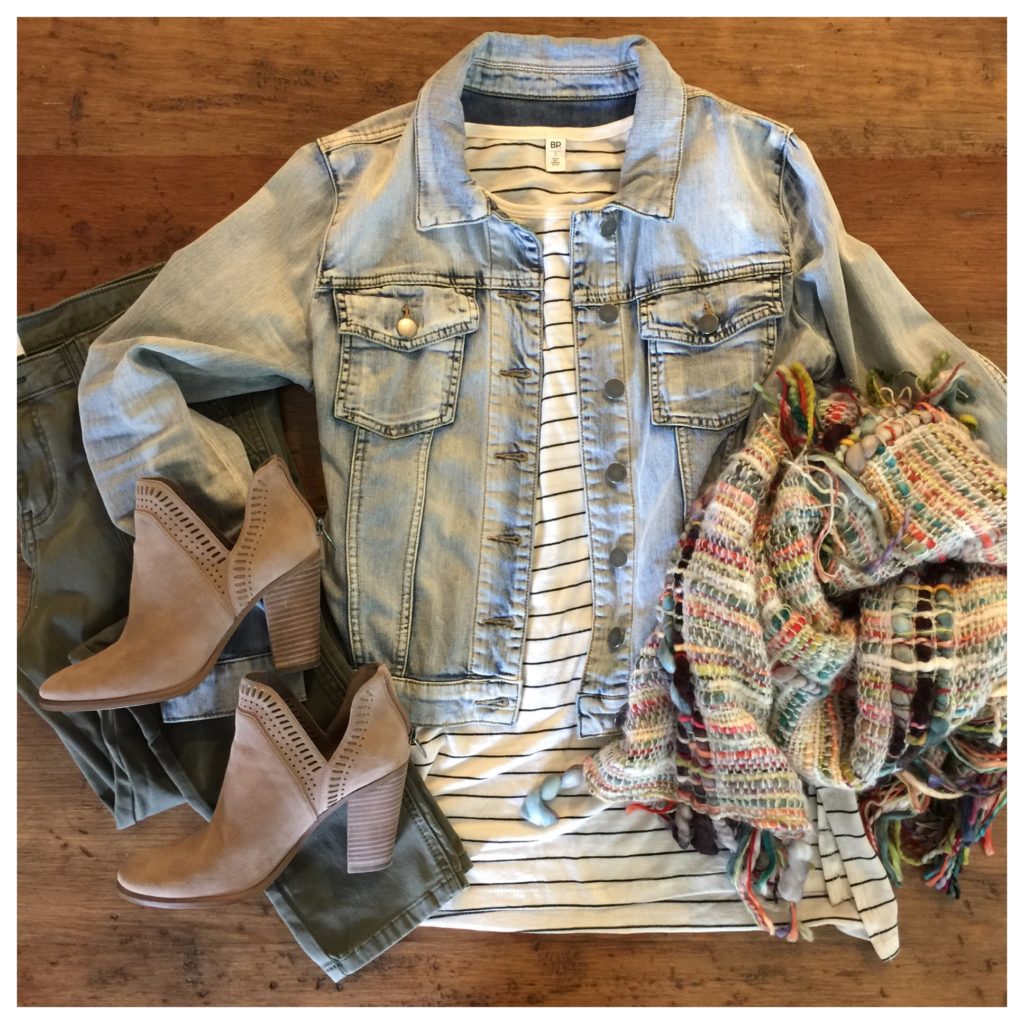 These tees are a great length for leggings, and they are perfect for layering because they are thin and lay nicely without being too clingy.  And they wash really well!

The jeans are under $65 and are super soft and stretchy. This AWESOME suede drape front jacket doesn’t feel like a jacket at all. It feels like a buttery layer that is soft, stretchy, and keeps you warm. But it’s definitely jacket-like. Jacket-ish if you will. All you really need to know is that it’s awesome.

For size reference, I’m wearing a small in the tee, a medium in the jacket, and a 27 in the jeans. 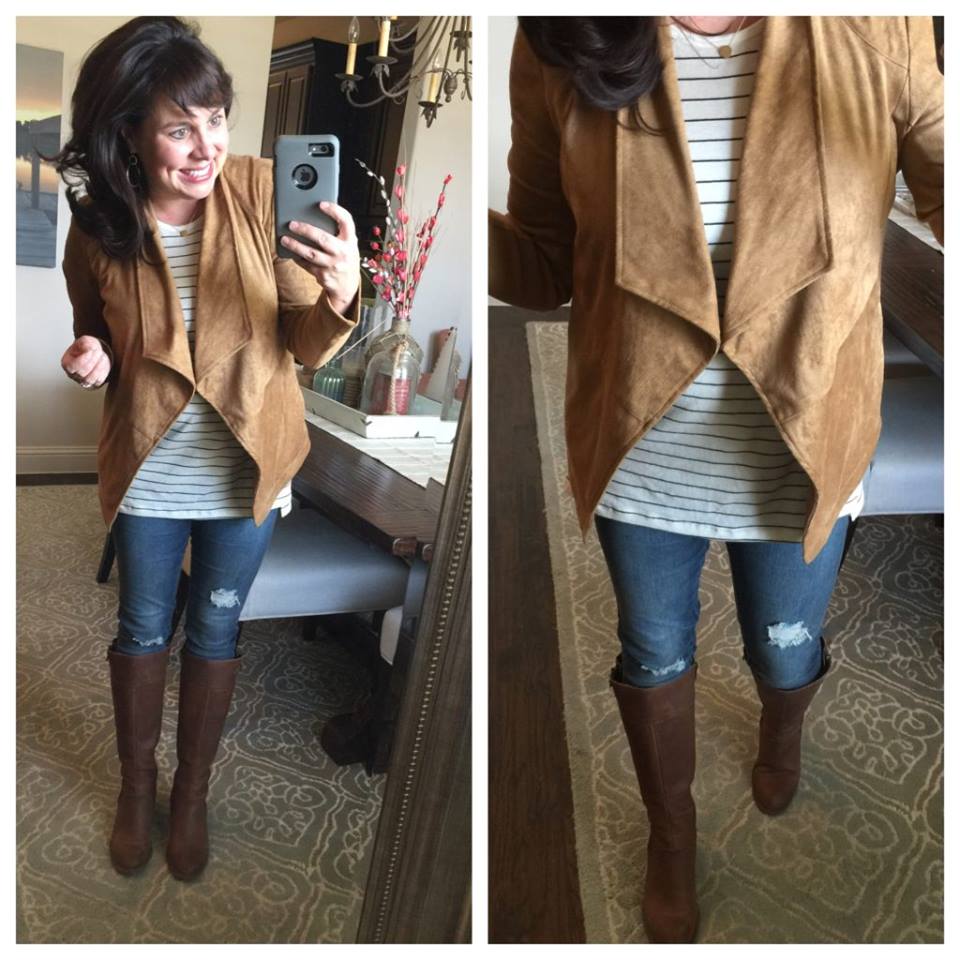 All right.  Now I’m done.  See you back here tomorrow with some awesome Friday Favorites!

Filed Under: The Bachelor 23 Comments