So today is Part 2 of this week’s Episode 6 Recap.  If you missed Part 1 you need to (YOU HAVE TO!) click HERE, because you really must read about Arie’s and Lauren’s 1:1 date.  It was action packed and filled with passion! Except the opposite of that.  And they went to the Moulin Rouge for the group date AND RIZZO WORE A BRA!!!!!!  Yep, it was worth noting.

Here’s a little review for you:

Episode 1, click HERE.  That time I had to google the spelling for wiener.  “I before e, except after c” still applies.

Episode 2, click HERE.  That time we realized Arie was basically dating his mother.

Episode 4, click HERE.  That time a girl almost drank her pee for love.

Episode 5 (part 1), click HERE.  That time Arie grounded one of his girlfriends.  And we loved it.

Episode 5 (part 2), click HERE.  That time one of the girls told Arie she would totally eat a human.

The second hour of the show this week started when Krystal found the 2:1 date card.  And this was what she was wearing when she found it.   I was completely baffled by her outfit choice.  If you can explain it to me, please leave a comment. 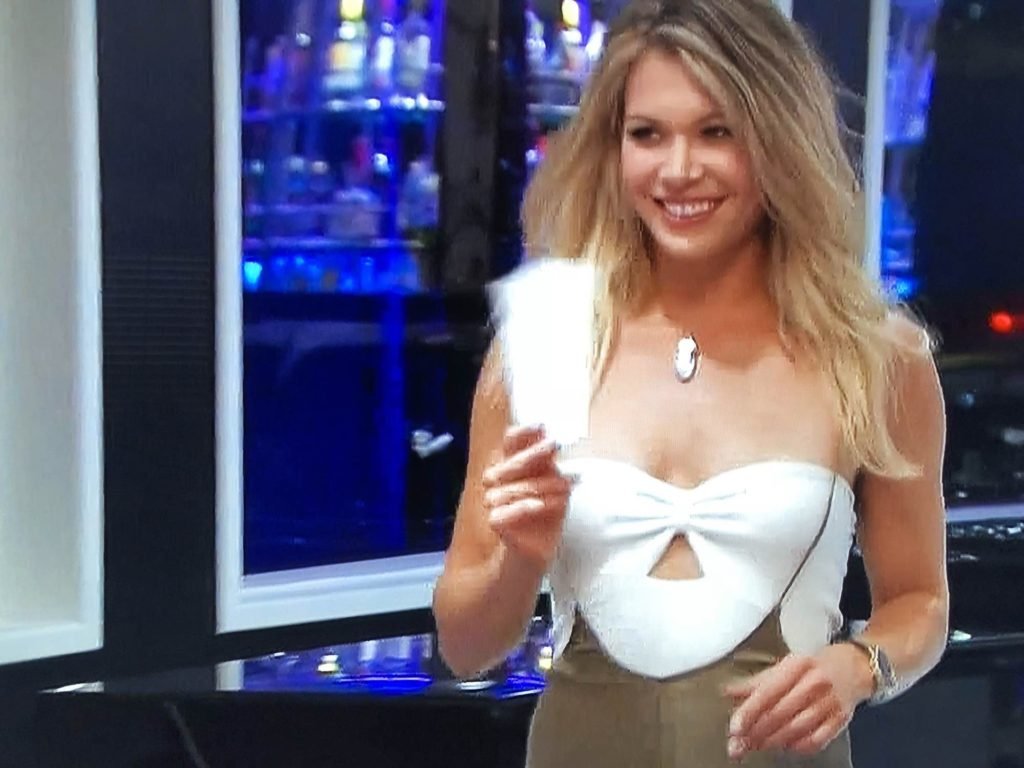 Here’s a look from the back.  Tell me you’re not baffled. 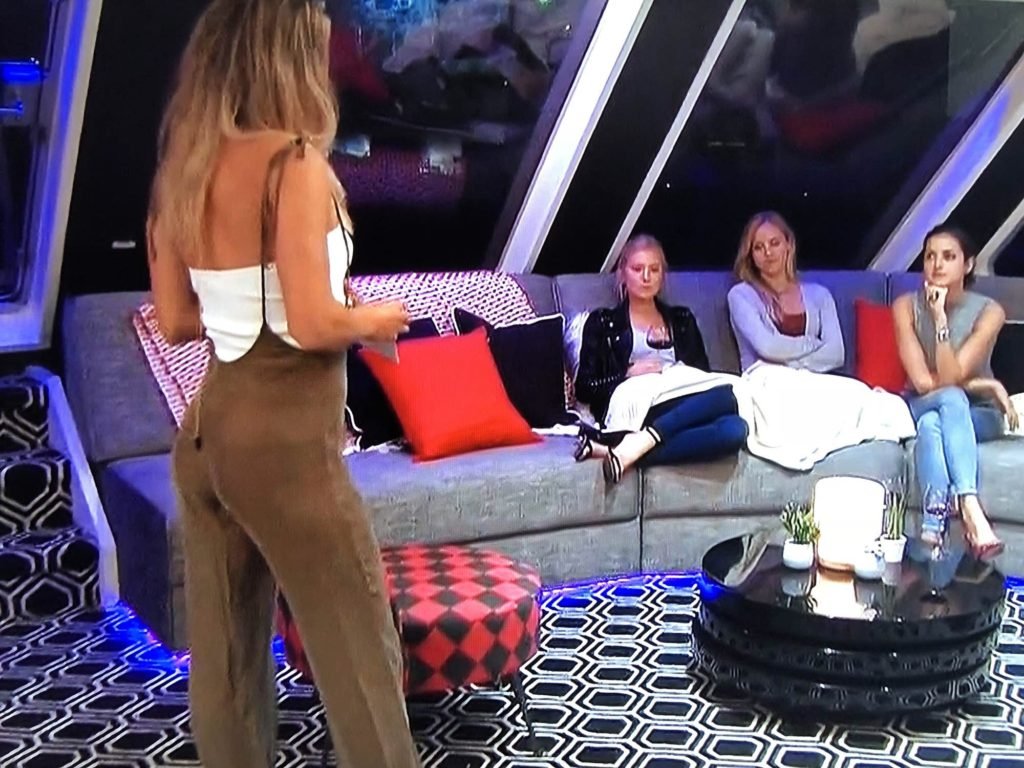 The date card said “We’ll always have Paris.“, and it was for Kendall and Krystal.

Krystal read the date card with so much smugness that I LITERALLY COULDN’T EVEN.  She said, “Personally, I’ve been preparing for this, so I’m ready.”  Taxidermy girl said she didn’t know how she felt, but Krystal was STRAIGHT UP GIDDY.  I liked her less than I’ve liked her all season.  Which is saying A LOT.

Here she is laughing at how nervous she thought Kendall was when she found out she would be with her on the date.  Tell me that doesn’t make your blood boil.  (Even as I wrote that, I realized I sound crazy.  What can I say, the girl gets to me.) 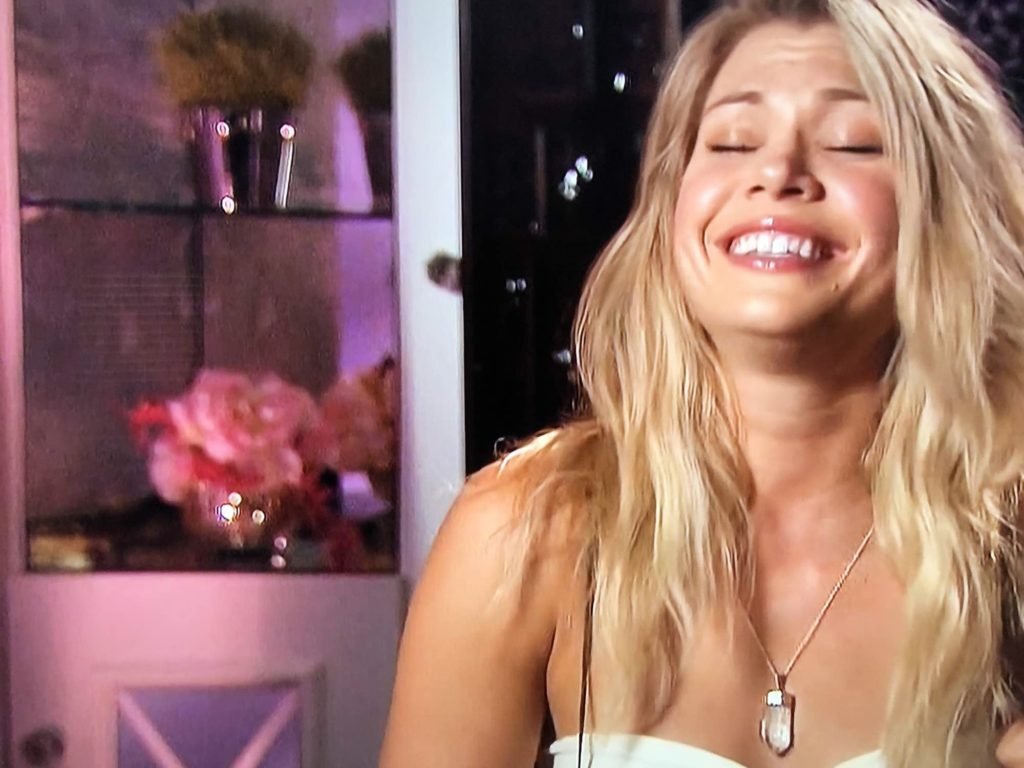 Okay, time for the date!

The girls rounded the corner to meet Arie….and once again, I was confused by the outfit.  Krystal chose to don a crushed velvet and spaghetti strapped body suit, and she paired it with a pair of high waisted white sailor pants.  #mmmmmmmkay 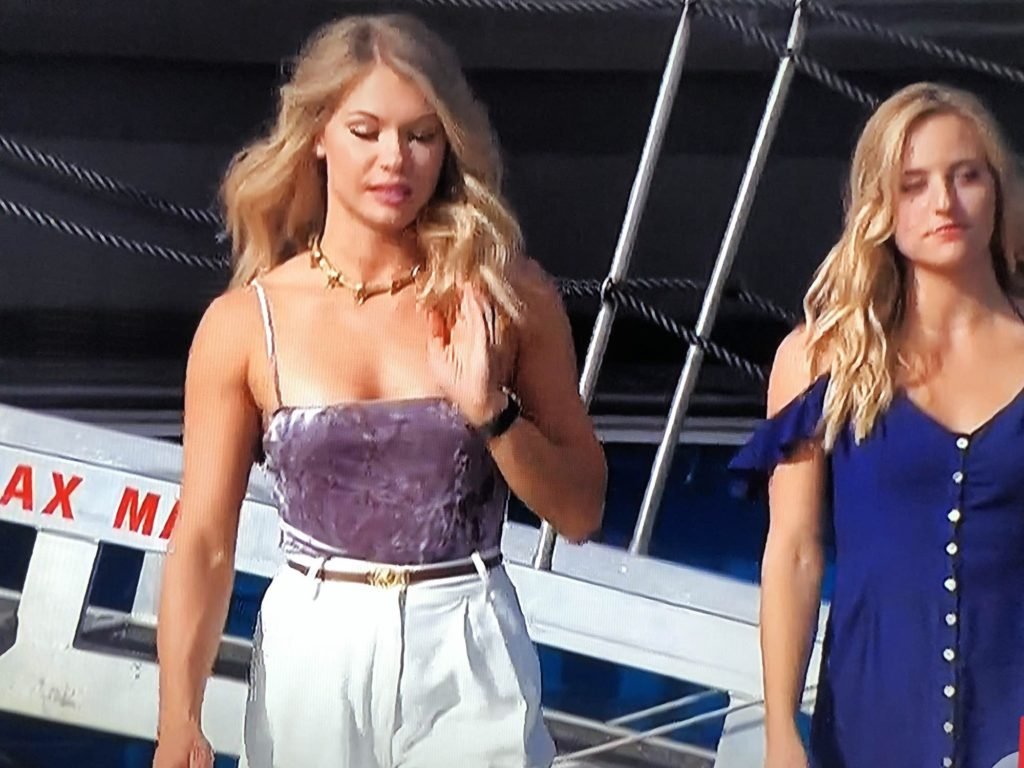 And y’all.  Krystal was doing a lot of moaning throughout Paris.  Like if she would nod in agreement with something, there would be a bit of a moan to accompany the nod.  When she hugged Arie when they arrived, there was a definite moan. 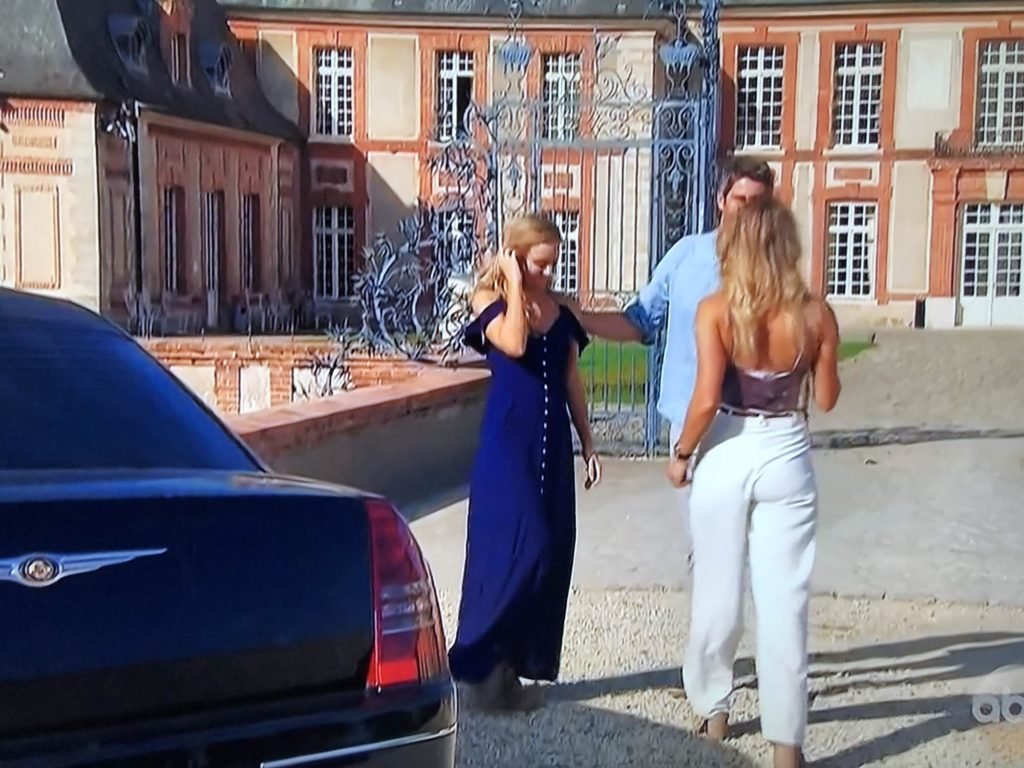 They were going to be spending the day at a French Chateau and on it’s grounds.   And I was totally uncomfortable watching them meander down this path together.  It was WAY too sister wives-ish. 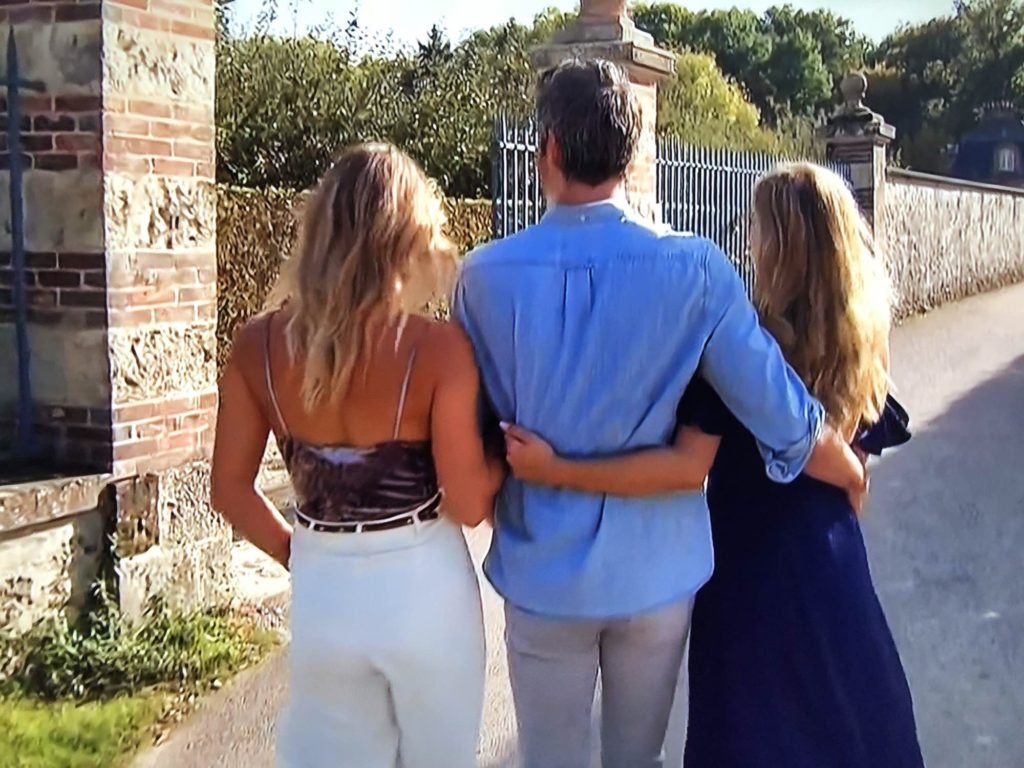 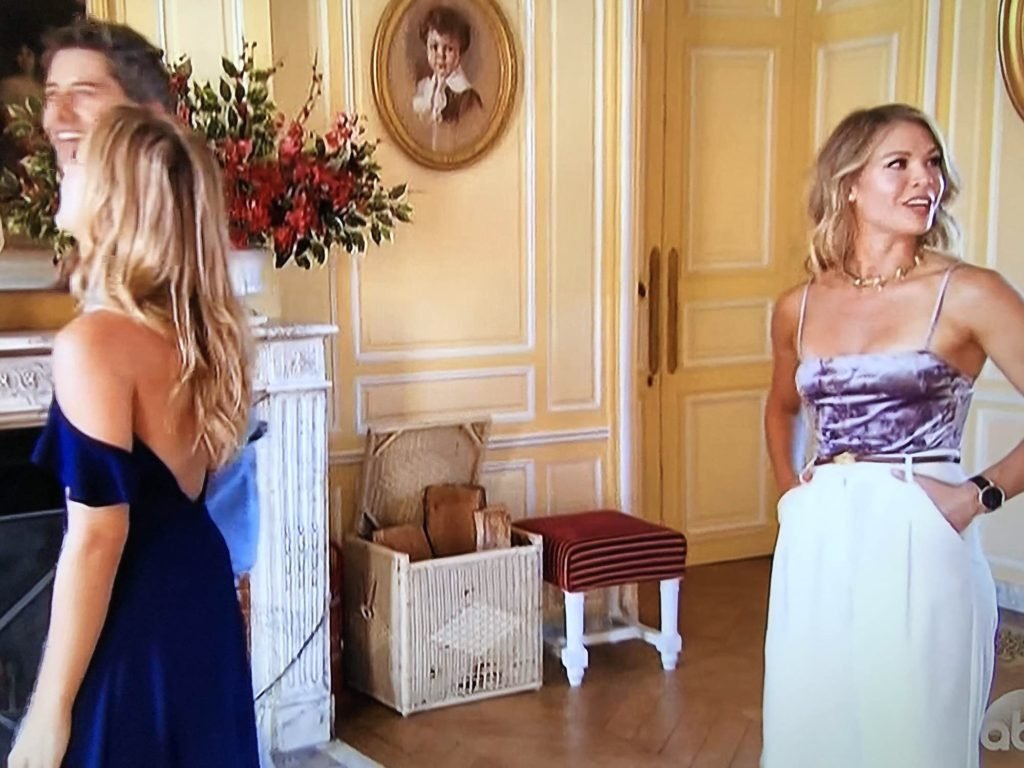 But seriously….enough with the hands in the pockets.

Here’s one thing nice I will say:  as much as I disliked her outfit, she doesn’t look terrible in it.  Take a minute and imagine yourself in that exact same outfit.

Fyi:  I laughed out loud when I imagined myself.  I did not look good. 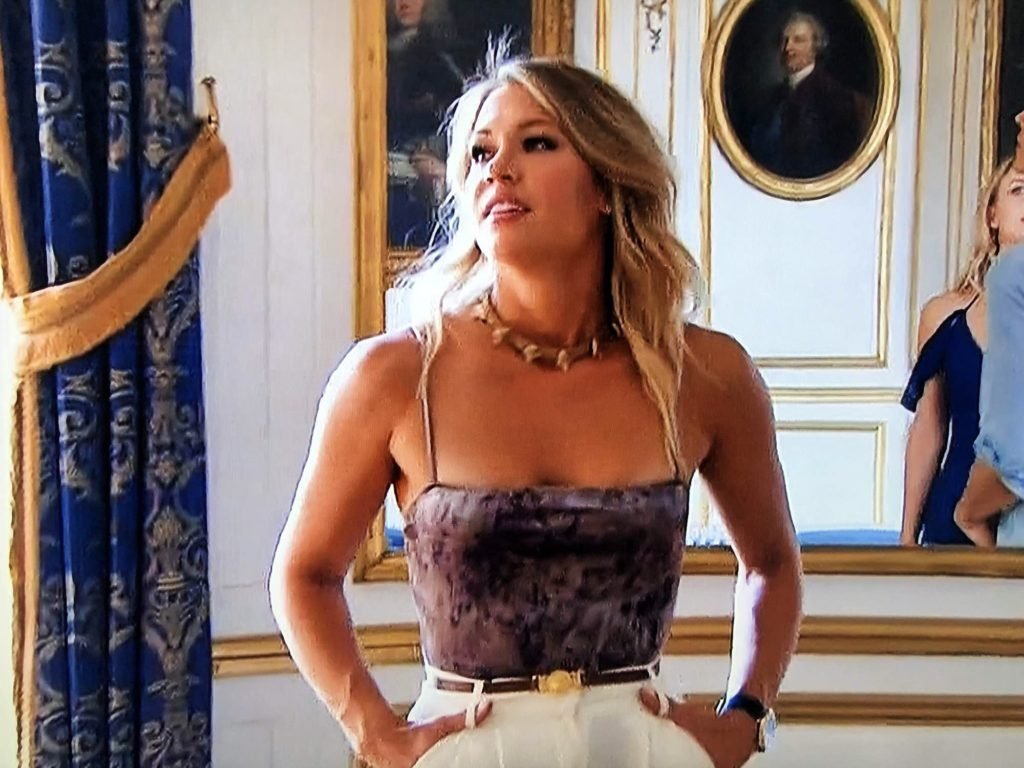 We’ve clearly reached the point in the season where Krystal’s mere presence annoys me.  Her “I’m better than everybody else” attitude has ruined me.  And now I can’t even look at her without having this basal response of misplaced anger.  I understand that I’m full blown whackadoodle right now, but I blame HER.

Arie and Krystal had the first alone time together on the date.  He was talking about what had happened with them the past couple of weeks, and she was of course moaning in agreement.

He told her that she wasn’t being punished by being brought on the 2:1, he just still had a lot of questions for her.  ME TOO, ARIE.  Here’s one you should have asked, “Why are you moaning?”  Here’s another one, “Where did you get your outfit?” 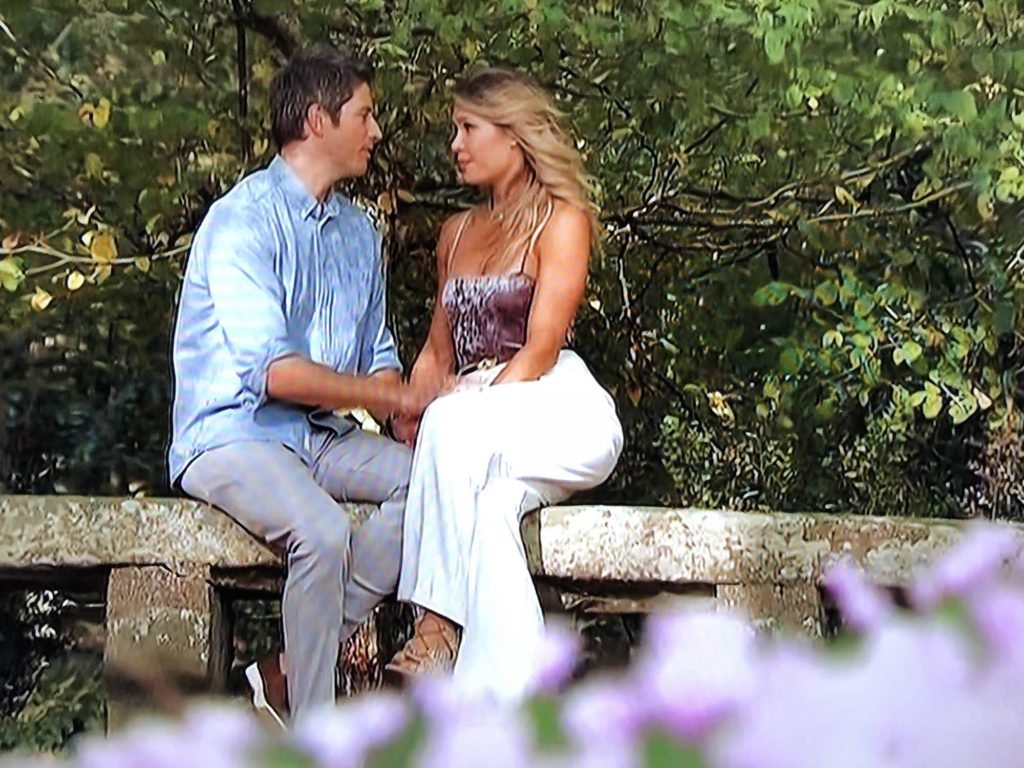 Krystal was still trying to make their disagreement and her temper tantrum sexy by the way she was talking about it.  She was using terms like “texture” and “depth”….which made absolutely no sense.  But Arie ate it up.  She ended the conversation feeling “so connected” and like they “had a fresh start”.  UGH. 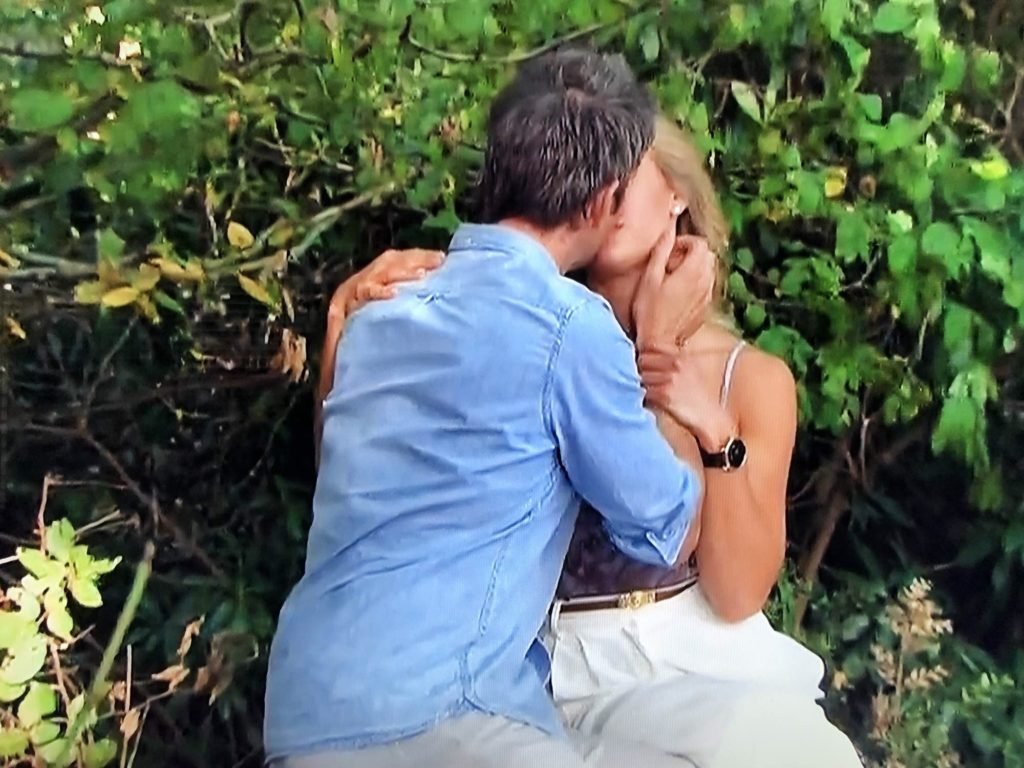 But then she started talking to Arie about Kendall (taxidermy girl).  She questioned Kendall’s presence on the date and told Arie she didn’t think Kendall was ready to get married and that she wasn’t open to falling in love.

Kendall and Arie then had their alone time. And Arie shared with her what Krystal had said about her.  I thought she did a great job explaining herself to Arie and assuring him that the right person would enable her to be ready for marriage.  This girl might have a strange fixation on mounting animals on walls, but she still manages to come off very likable.  Which is impressive. 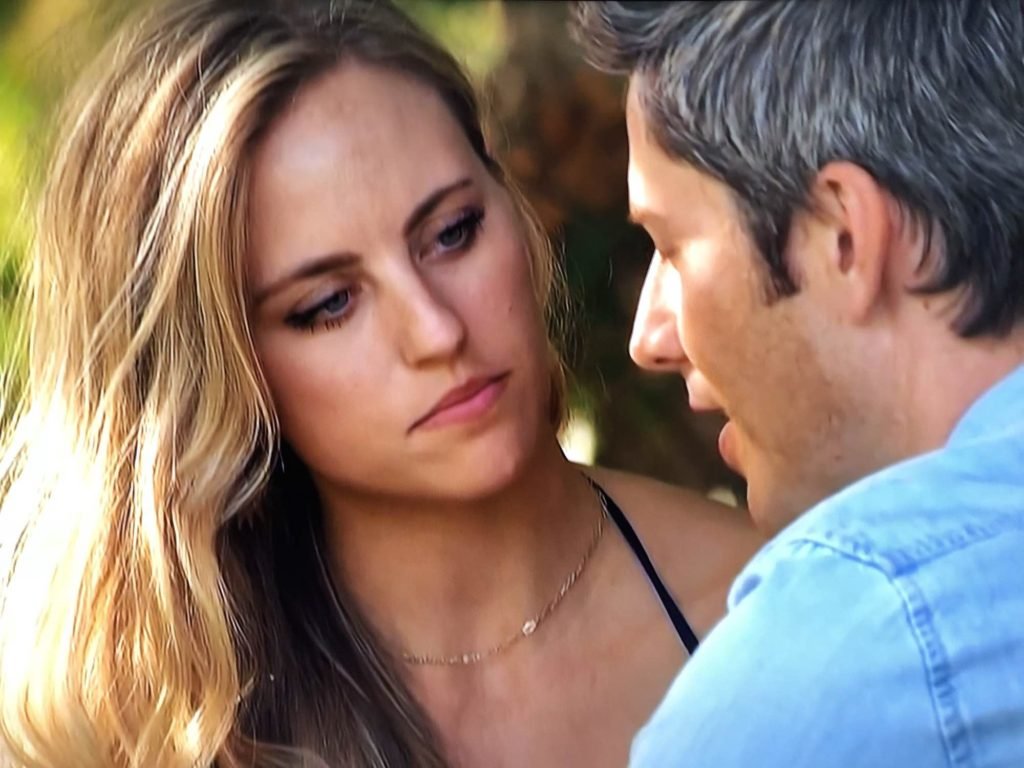 When Kendall headed back to the bench with Krystal, I’d be lying if I said a part of me wasn’t hoping for a full blown cat fight.  Krystal’s hair was screaming to be pulled and her high waisted white pants were begging for a big ol’ wedgie.  But Kendall was compassionate.  Bless her dead animal loving willing to eat human flesh heart.

And then she sat down with Krystal and tried to psycho-analyze her.  Kendall said “I’ve dated somebody like you before….where in the face of conflict, they said things to hurt me.  And saying the things are hurtful doesn’t mean that you win.  It just means that you hurt somebody.”   Let’s all take a page from Lauren’s book.  WOW.

And then she said this….”I can definitely empathize with you.”  And she got up and moved down the bench closer to Krystal.  She said “I know you have so much beauty in you.   But you’ve been through a lot.  More pain than I can even understand.”  And I was like, “What are we talking about here?  Are we talking about how she grew up in a bowling alley?  Did I miss something?” 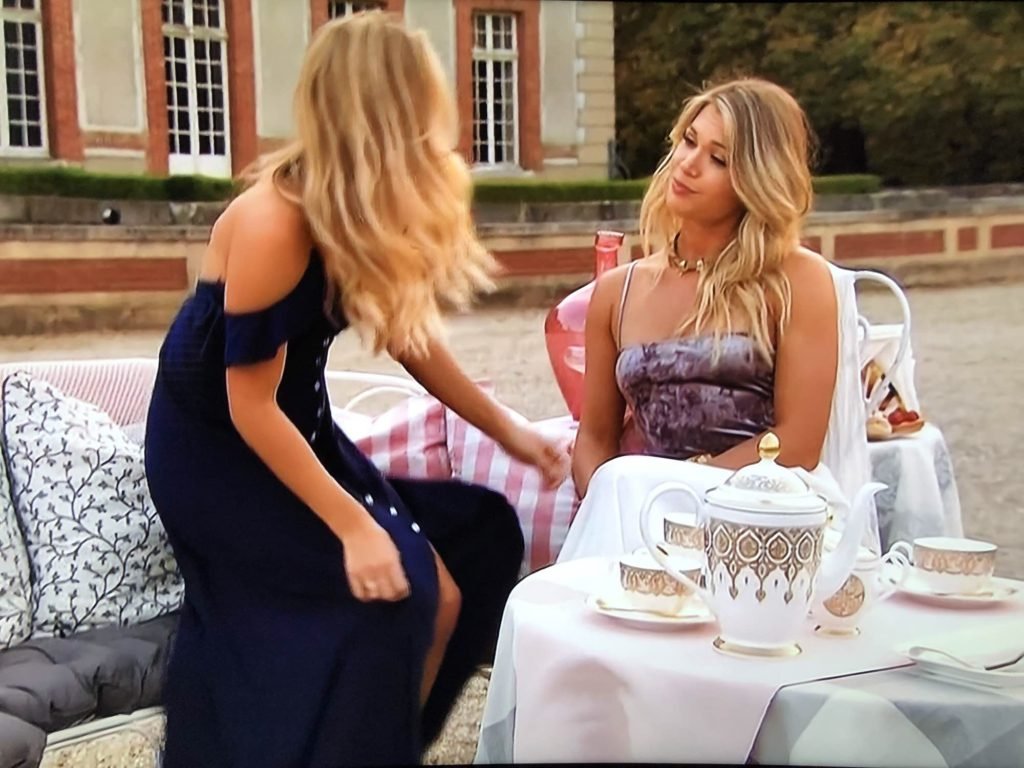 So Kendall tried to connect with Krystal and show her some very undeserved empathy, and Krystal ended it with “I don’t really have words.”   I have 2 words, Krystal.  Buh-Bye.

Arie came back to the girls, he picked up the rose and waved it around, but then he said he wasn’t yet ready to give the rose out.  So he invited them both to dinner that evening. 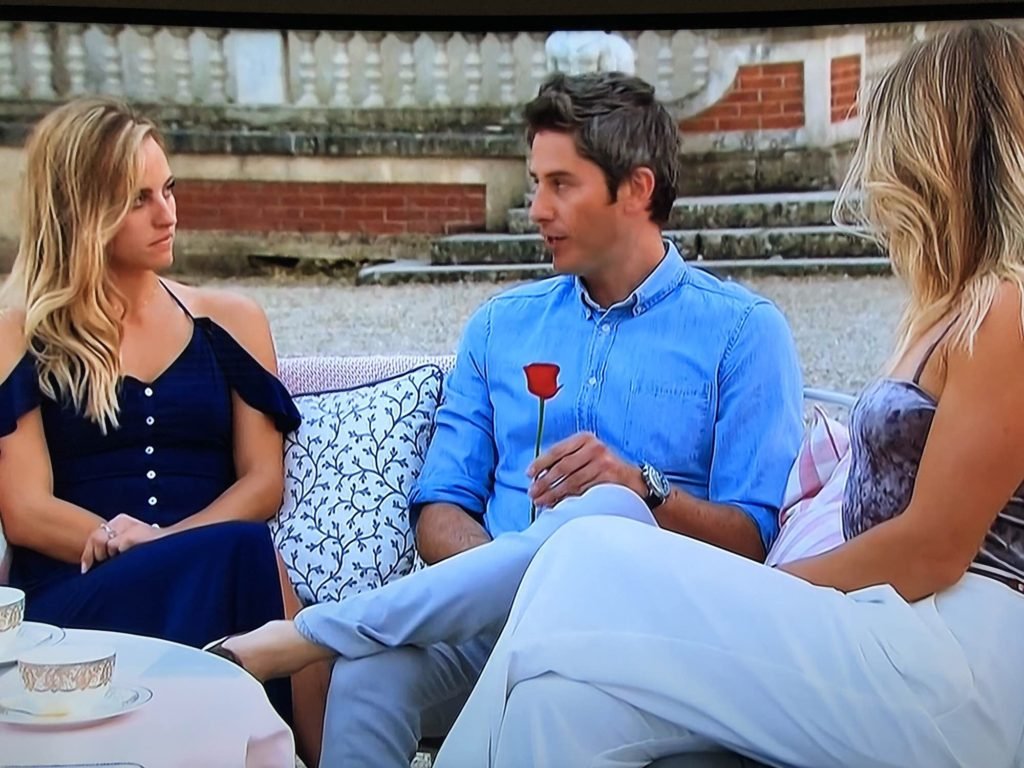 Ladies.  We are going to have to agree to disagree on this one.

But for the record, I agree with Kendall.

And then Krystal moaned some more and drank a sip of wine.  And yes, the way she drank her wine bothered me. I think I might need counseling. 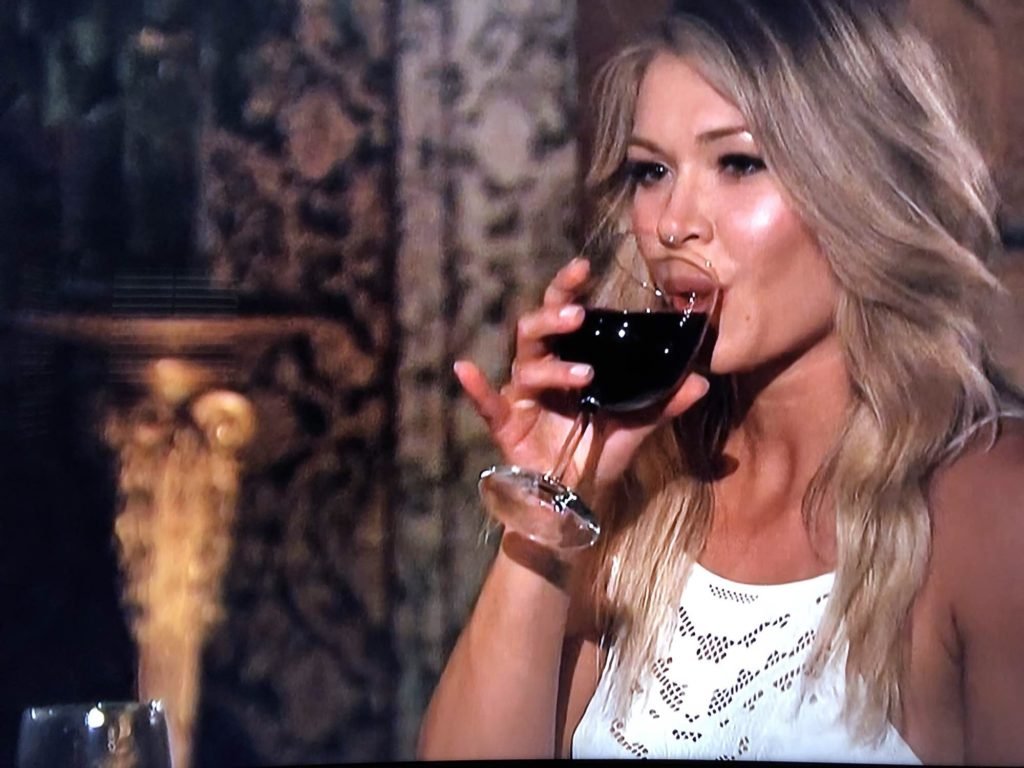 Arie arrived, and they were dining with the Eifell tower in the background.  It was lovely. 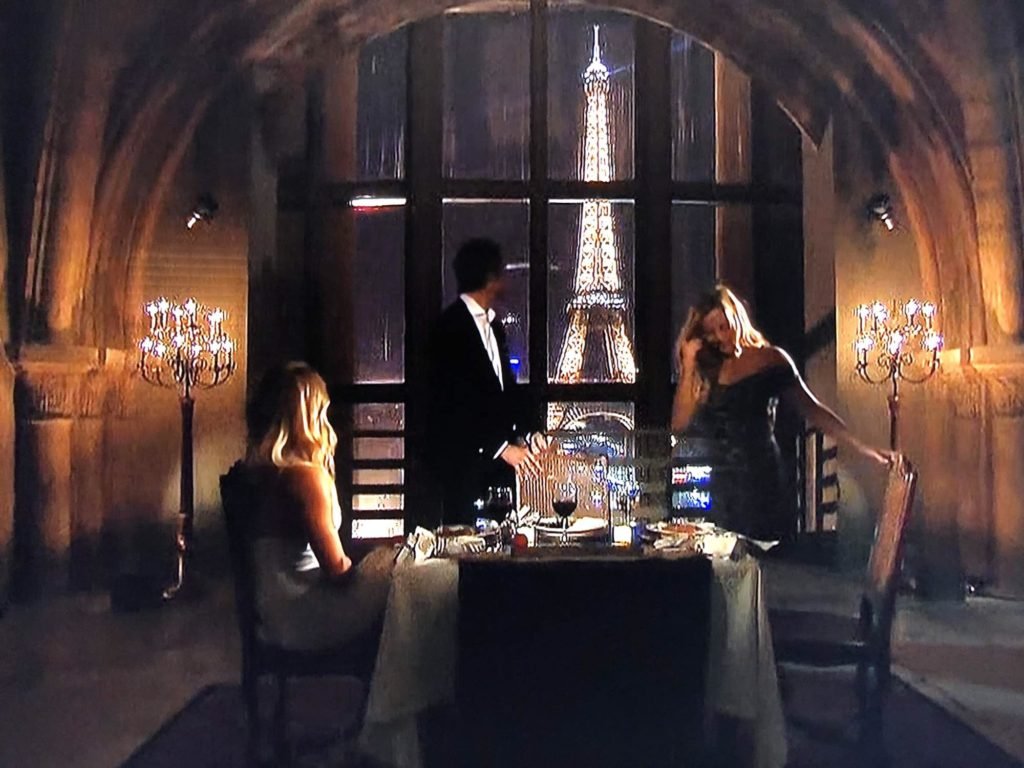 Krystal opened up the conversation by saying that the journey was “Indescribable, yet magical.”  AND THEN SHE MOANED SOME MORE.  Yep, I’m going to need a referral for a reputable therapist.

Arie then asked Kendall if they could have some time together.  We didn’t get to hear that conversation, and I assumed he had time with Krystal too….although that was also not shown.

He said goodbye to Krystal, in front of Kendall, and then Arie and Kendall stood up and walked off hand in hand. 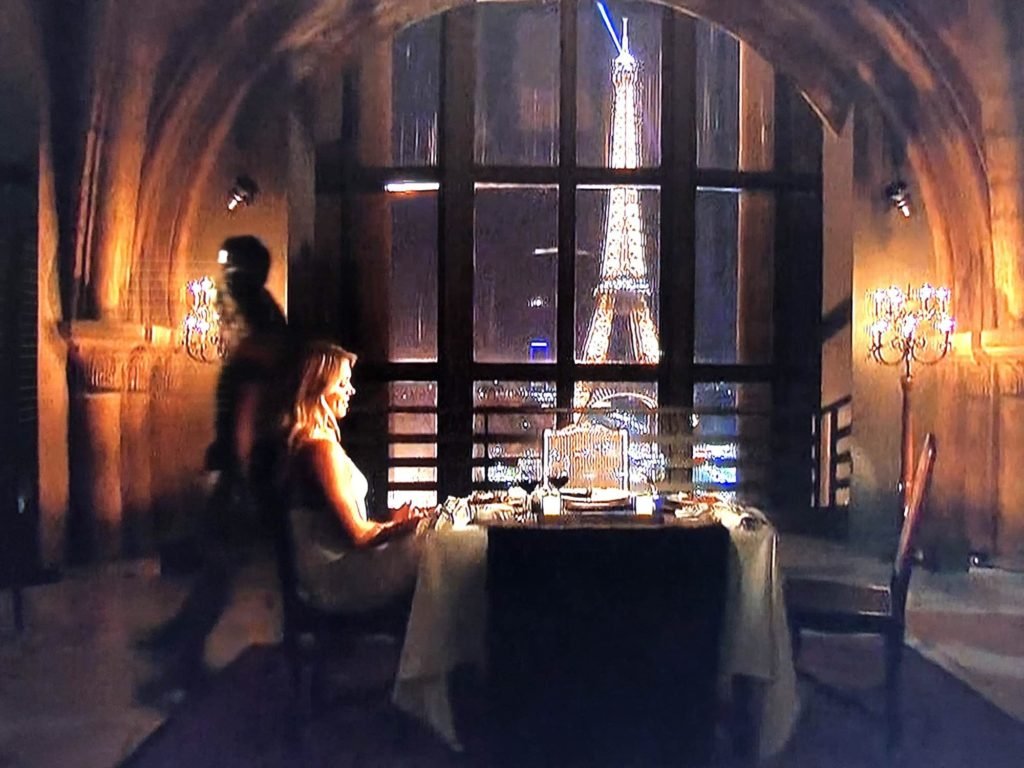 And then Kendall and Arie made out at the Eiffel Tower.

Through tears, Krystal said “I just want to feel accepted and good enough.”  And it was actually truly heartbreaking.  I all of a sudden felt sorry for Krystal, which I thought was emotionally impossible for me to do, so I’m feeling better about myself now.   No need for therapy.

Jacqueline got the second 2:1!

And she said that getting this date was like being a kid at Christmas and getting a pony on Christmas morning!  However, if she didn’t learn to ride the pony by the end of the day, it was going to be shot.

I did have to wonder if “ride the pony” was code for something. 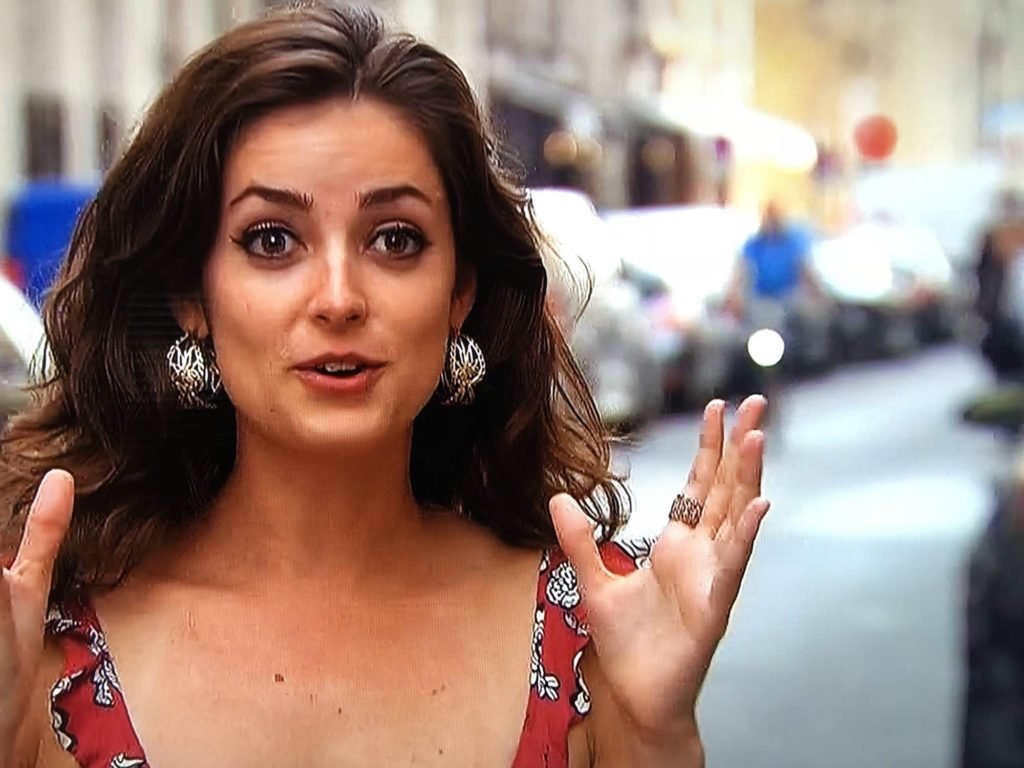 They hopped in a cute little convertible that was very French, but it broke down like .3 miles down the road. 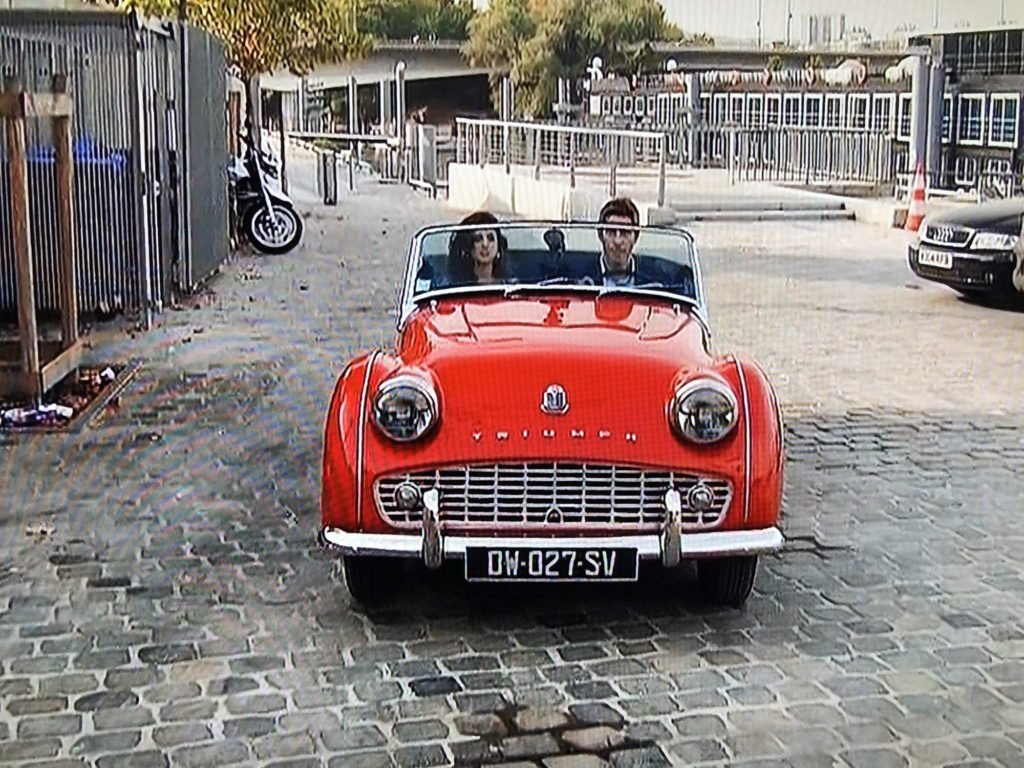 They headed to a little boutique where Jacqueline did a little shopping and emerged in a classic black dress. 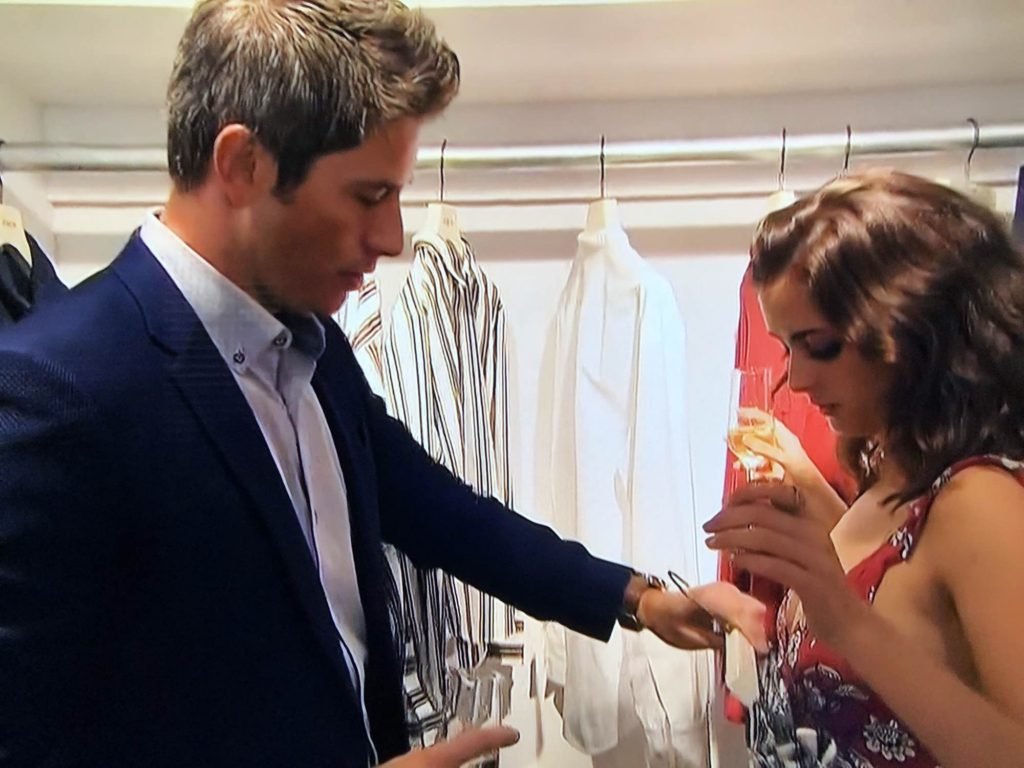 She looked gorgeous, but she walked like a baby giraffe fresh out of the womb in the heels. I was legitimately worried for her ankles.  I tried to post like a 2 second video, but my site wasn’t cooperating….so head over to instagram sometime today to see it!

That night at dinner, Arie basically told her that when they first met he wasn’t sure if he wanted to be with somebody as smart as she was.   That he was intimidated by her intelligence. Did I get that right?  Is that what he said?  #redflag

She told him she thought they made a great pair.  She also shared with him how she has 6 years left of school to get her PhD.  And y’all. Let’s be honest with each other here.  This relationship will never work. 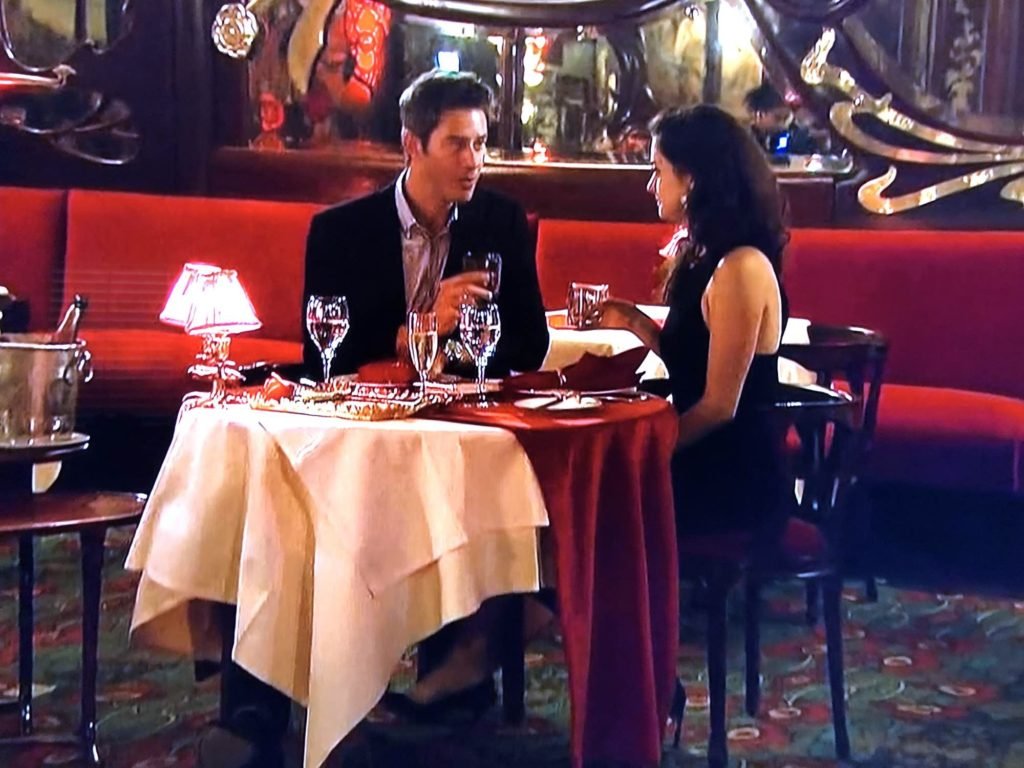 Yet she got the rose. 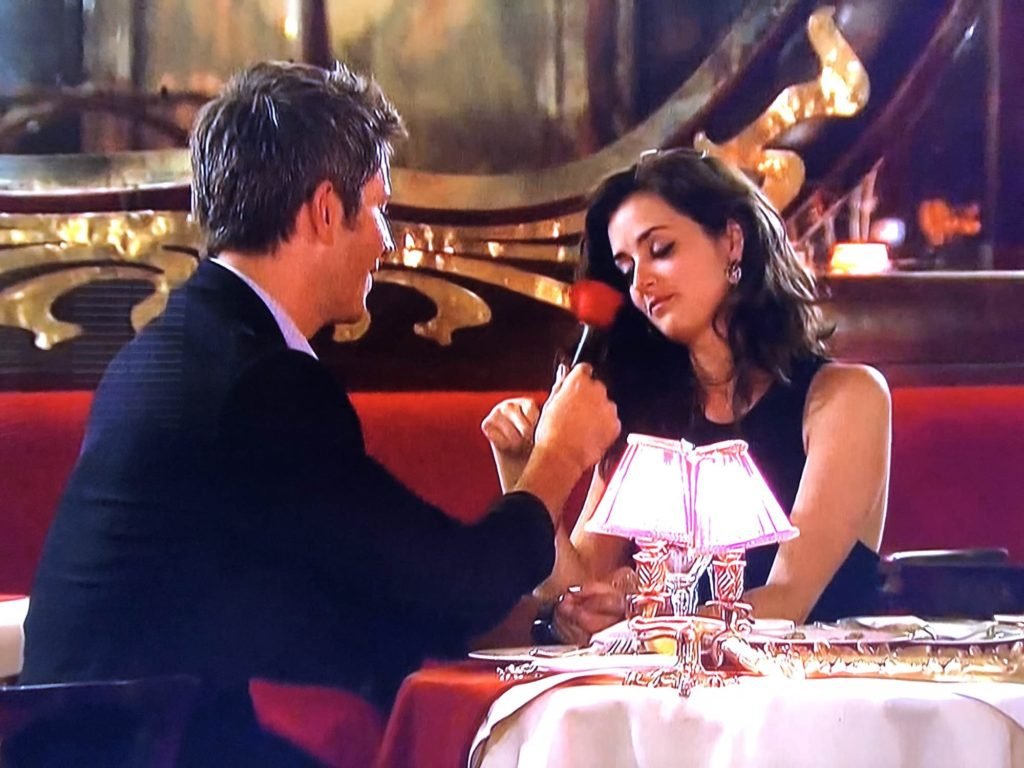 Time for the Rose Ceremony (with no cocktail party).

Lauren (snooze), Rizzo, Kendall, and Jacqueline all already have roses!  Who else got roses?  Tia, Sienne, and Becca.

That meant Jenna and  Chelsea didn’t get roses.  🙁

The most dramatic and cringe worthy things this episode happened in the previews for the next several episodes…so hang on ladies…it’s about to get real.  It looks to me like Florence is the perfect place to have an emotional breakdown.

I’ve got one fashion related item before you go!  AND LOOK HOW FLIPPING CUTE!!!!

I planned an outfit with the thermal swing top I’ve been showing you since last week (still on sale), and I paired it with my awesome new wedge sneakers!!!!  I got camo, but they come in lots of color choices.  The online description suggested to size up….but lots of the reviews said to size down 1/2 a size, so that’s what I did. And they are perfect! And speaking of the reviews, they are FANTASTIC.  We’re talking 194 5 Star Reviews!!!

Now let’s talk about the jeans.  They are ankle skinny jeans, they are UNDER $80, and they have a good amount of distressing (without being so far out there like my last pair).  And look at the cute and modern hem.  Their reviews are awesome too! 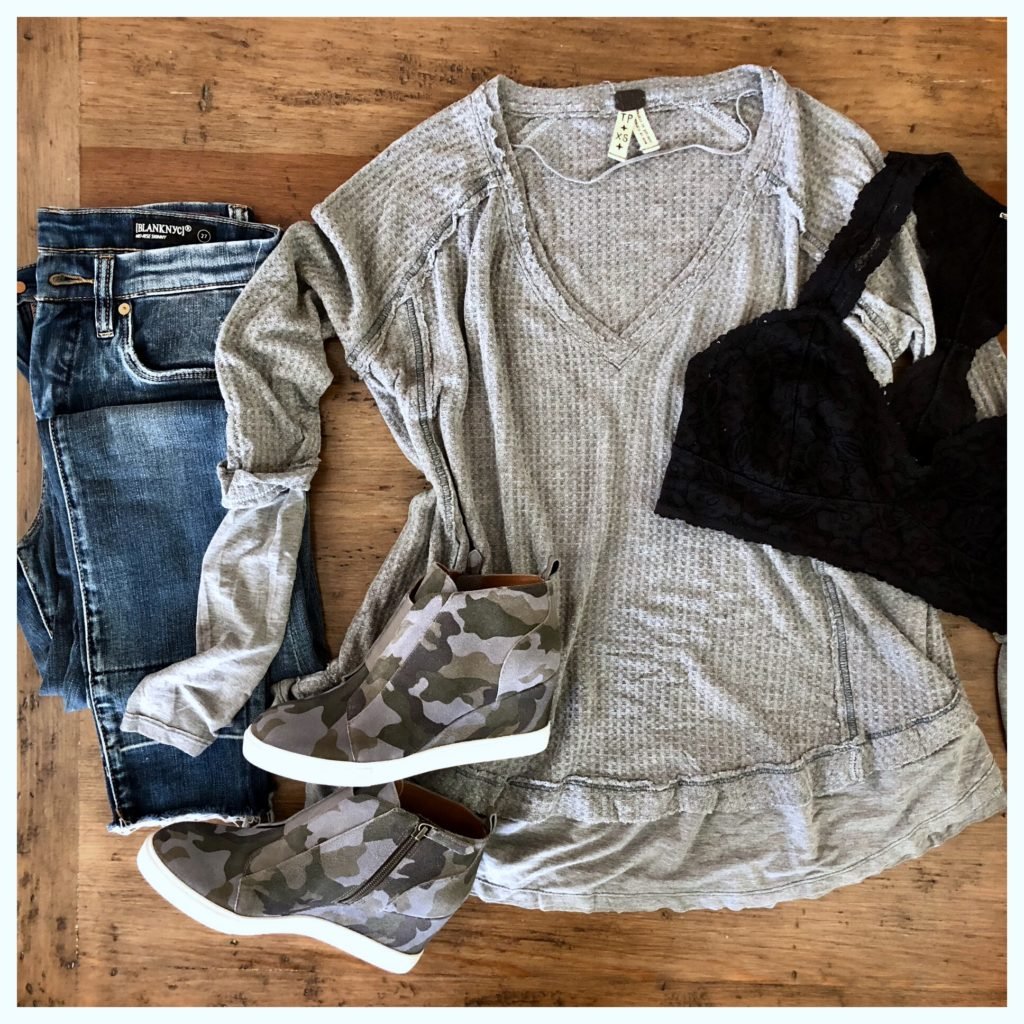 Get The Look For Yourself Here:

See you back here tomorrow, ladies!

Filed Under: The Bachelor 29 Comments