If you didn’t already see my Bachelor recap from last week, click HERE to check it out. 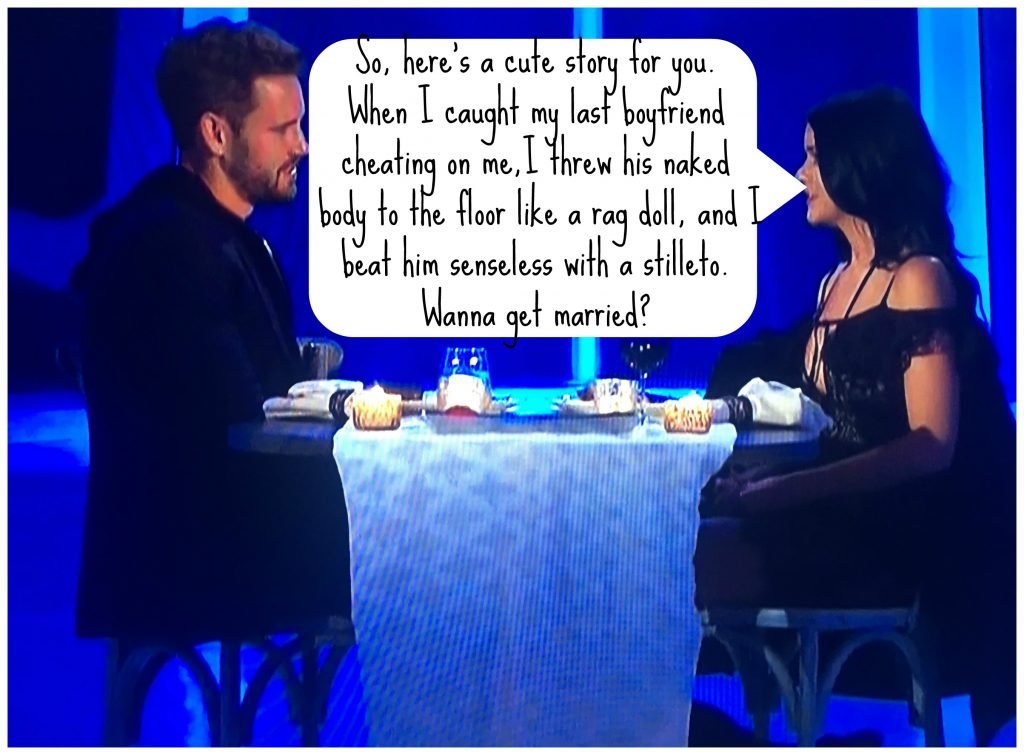 Now, before we get started with today’s recap, I have an AMAZING code to share with y’all today.  The code stmtscarfsale will get you 60% OFF all scarves on the Accessory Concierge website.  SIXTY PERCENT OFF for the next 48 hours.  That’s crazy!  I’ll tell you what’s crazier….these babies will ship out within 24 hours of you ordering them.  Which means they will make perfect Valentine’s Day gifts for daughters, sisters, friends, teachers, and the list goes on…

These are really great scarves ladies, so scoop them up while supplies last! 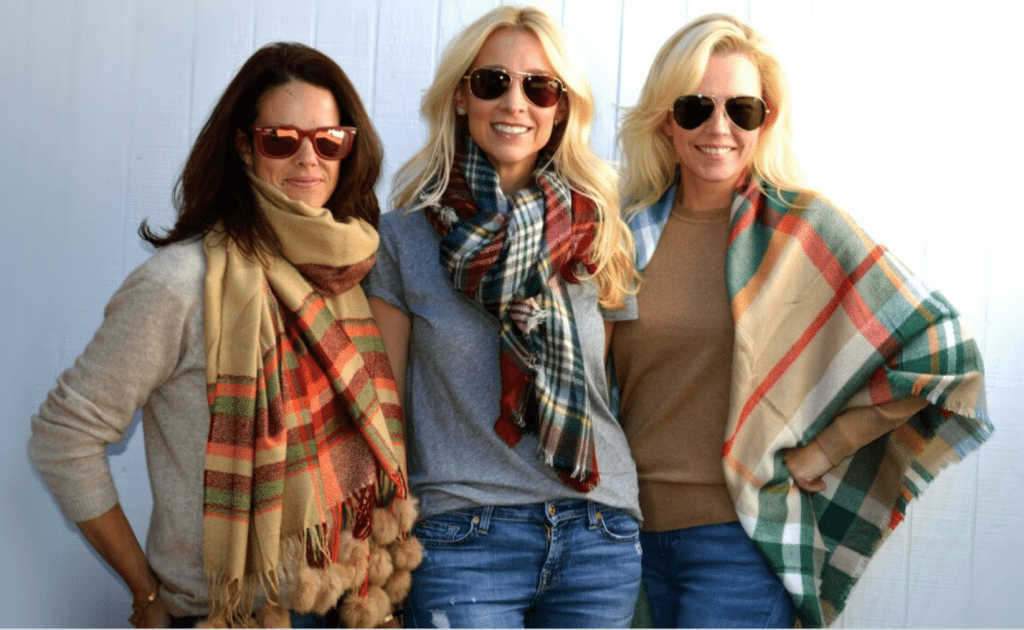 All right, now it’s time for our recap!  We started out the episode with a war of words between Corinne and Taylor.  It was mind-numbing.  During their back and forth on “emotional intelligence” and “maturity” and what exactly those terms mean, my overall IQ dropped by 70ish points. I could actually feel it happening.  I will say I lol’d when Corinne told Taylor that she…and I quote….had  “a skank face on her face.”  That’s good stuff right there.

They went back and forth.  And back and forth.  And then back and forth again.  I was thinking somebody was going to have to step in and just recommend that they “FOR THE LOVE!  AGREE TO DISAGREE!”.  But then, something weird happened.  I was legit confused.  It was like Corinne was playing some sort of Jedi mind trick on Taylor.  I think at one point Taylor didn’t know up from down and you could tell that a little bit of self doubt started to creep in.

Or maybe Corinne Jedi mind tricked me, because by the end of the argument, I liked Taylor LESS than I liked Corinne.  And that’s sayin’ somethin’.  Probably about my emotional intelligence.

Corinne went to Nick, cried on his shoulder, told him she didn’t think Taylor was here for the right reasons, and then called Taylor “entitled”.  #saidthegirlwiththenanny #whotakesnaps  And even though history has shown that when you tattle tale on another girl it is not taken favorably, she still  seemed to somehow guarantee herself a rose this week.   I mean, Nick ended up thanking her for being so honest.  So, she obviously Jedi mind tricked him as well.

The chick has SKILLZ. 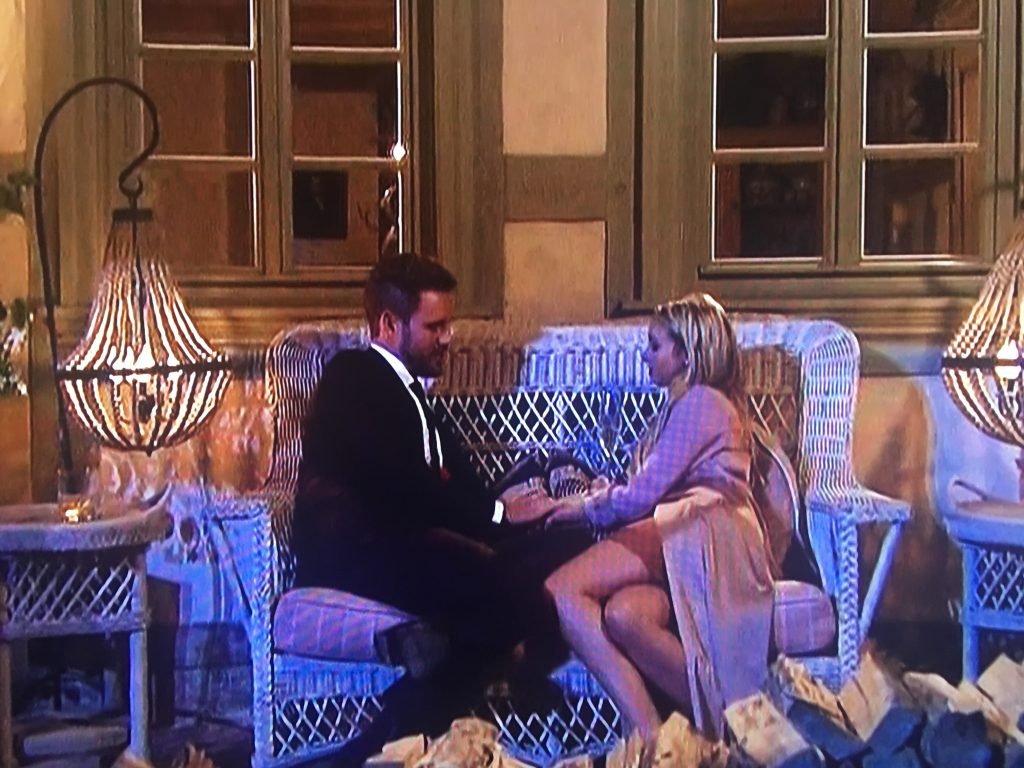 It was obviously SUB ZERO during the rose ceremony.  I felt so badly for the girls.  I’m straight up miserable when cold.  I shiver uncontrollably (which makes my back hurt), and my teeth chatter like those wind up teeth. I’m pretty sure I would have been all PEACE OUT, JUST SEND ME HOME.

Who already had roses:  Raven and the Russian Spy

Josephine was straight up shocked when Nick called her name.  As was I, Josephine.  As was I.  Also, I wonder when exactly I’m going to stop shouting “WHO IS WHITNEY?” at the t.v. when her name is called.

This is Whitney, y’all. Study this face so you won’t be left wondering who she is next week.  Commit it to memory. 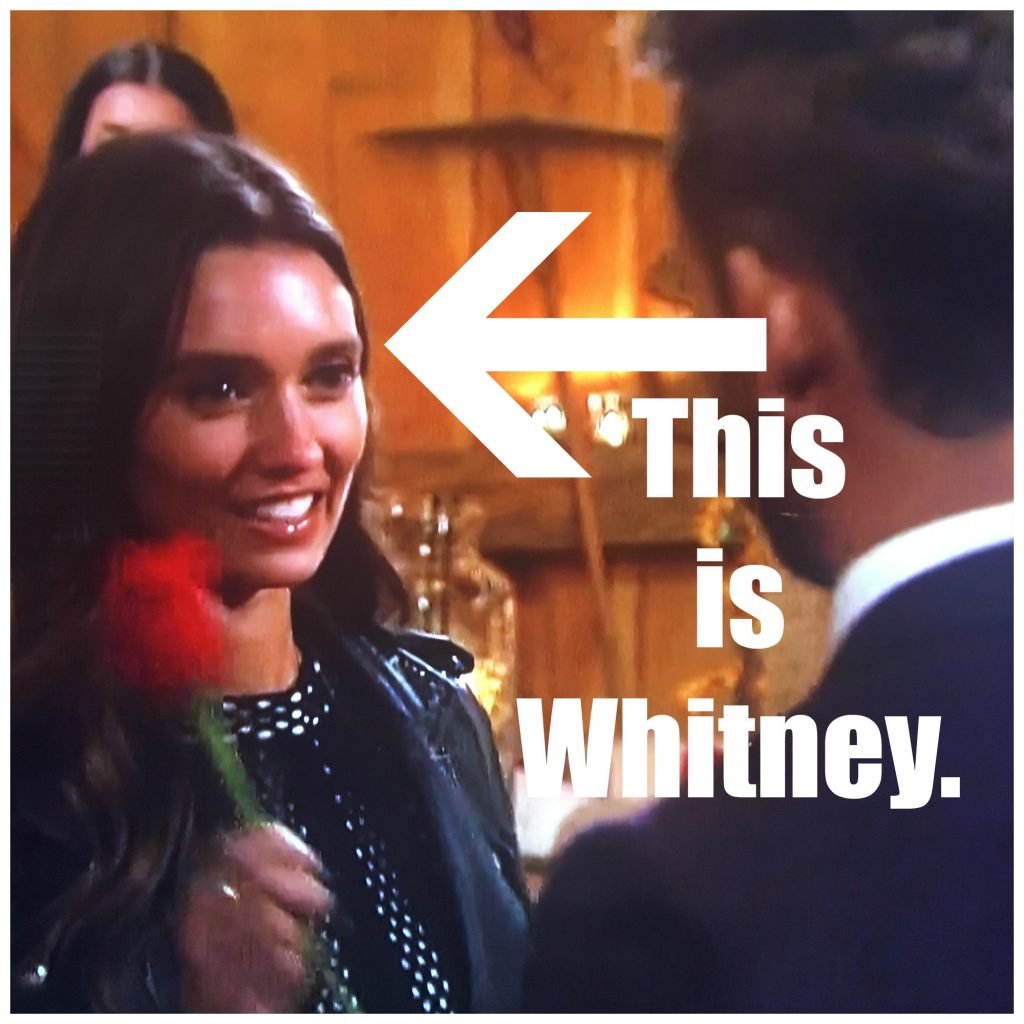 Nick let all the remaining girls know that they were going to New Orleans!!! And I feel like now is as good a time as any to say that Shark Girl is growing on me.  I mean, after the New Orleans announcement, the girl said, “Hi, I’m Miss Louisiana!  I love gators, grits, and a goooooooooooo-d time.”  It’s important to know that while saying “gooooooooooooood” she expertly shimmied her boobies (that if you remember correctly, just recently celebrated their 1 year old birthday).  They moved just enough.  If I shimmied like that, somebody might get hurt. 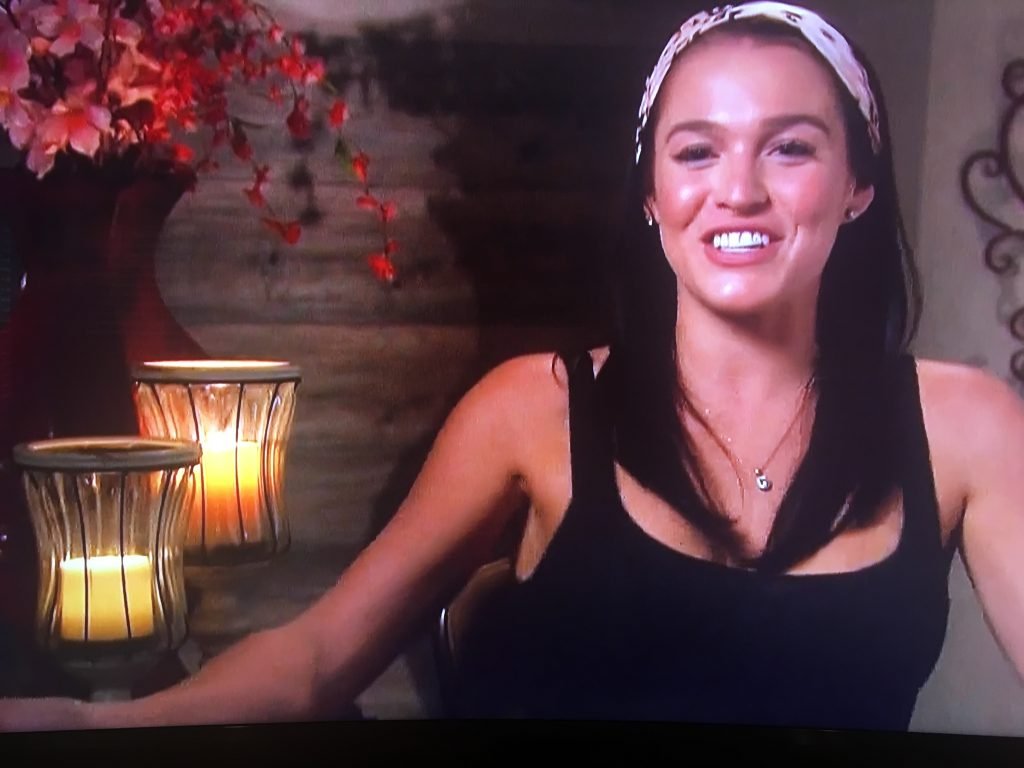 They arrived at a swanky hotel, and then Harrison showed up to say there was going to be a group date, one 1:1 date, and one 2:1 date.  A 2:1 date?  OH, THE HUMANITY!  At that point, I would have bet my entire life savings that Corinne and Taylor were going to be the lucky ladies that were paired together on the dreaded 2:1.  And I had flashbacks to this scene.  Yep, I reminisced about the the most epic 2:1 pairing EVER in the history of EVER.  #rememberthebadlands #neverforget 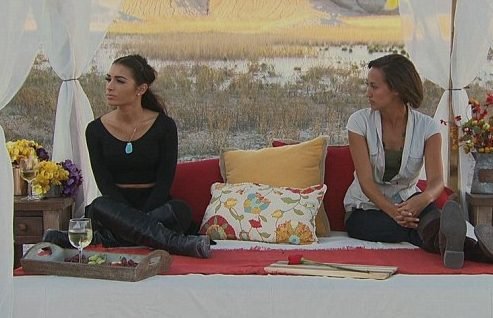 1:1 Date:  Where have You Beignet All My Life with Rachel

Nick and Rachel’s date was set up for them to experience the city.  They walked around a local market, sampled hot sauces, ate oysters, and we all marveled that Rachel was able to stay dressed.  I mean, her “top” (and I use that term very loosely) had a plunging neckline AND it was backless.  Girls, that’s hard to wear.

And then Nick ate his first ever beignet.  And he dug it. 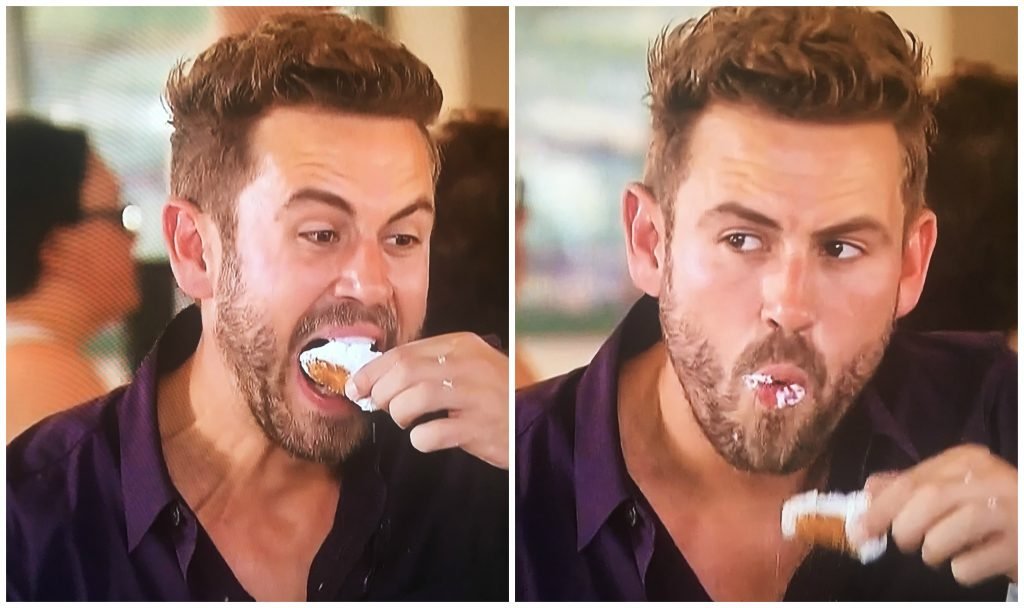 I mean, he realllllllllly liked them.  This was his actual face after eating his first beignet. 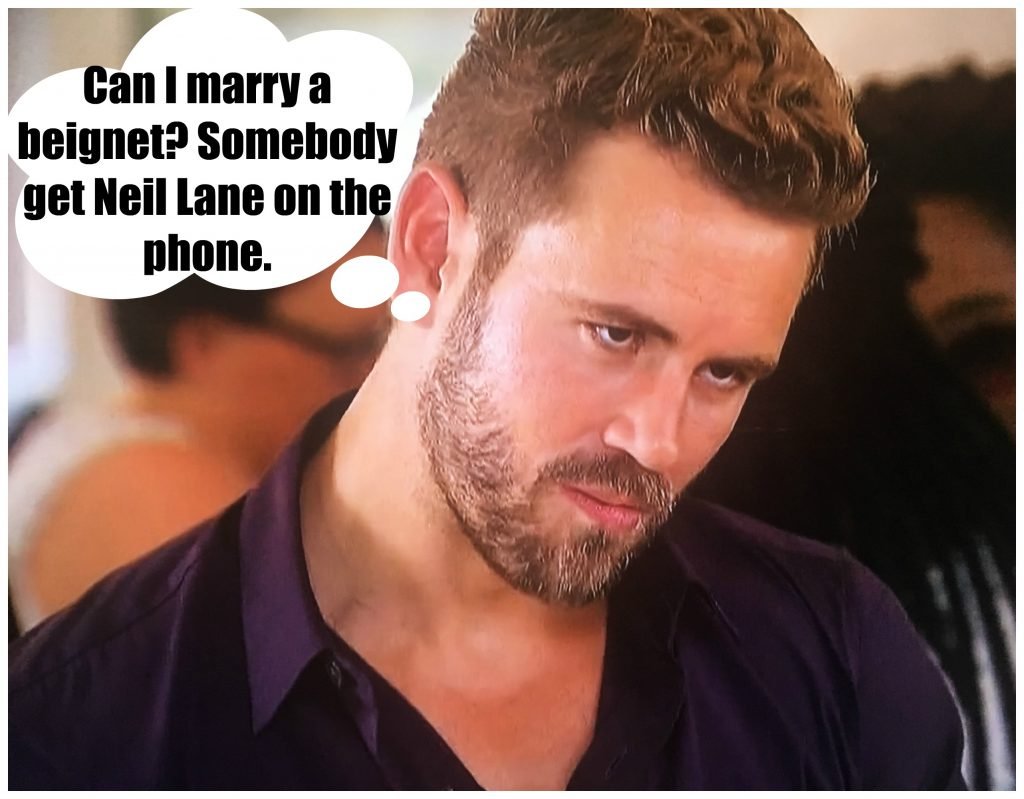 Then they got the opportunity to participate in a Second Line.  And Nick got down with his bad self.  He had a surprising amount of rhythm, and you could tell they were actually having a blast together.  It was cute!  I would like to point on here that our boy Nick can dance AND roller skate.  If he could sing, that would be a trifecta.  #thewholepackage 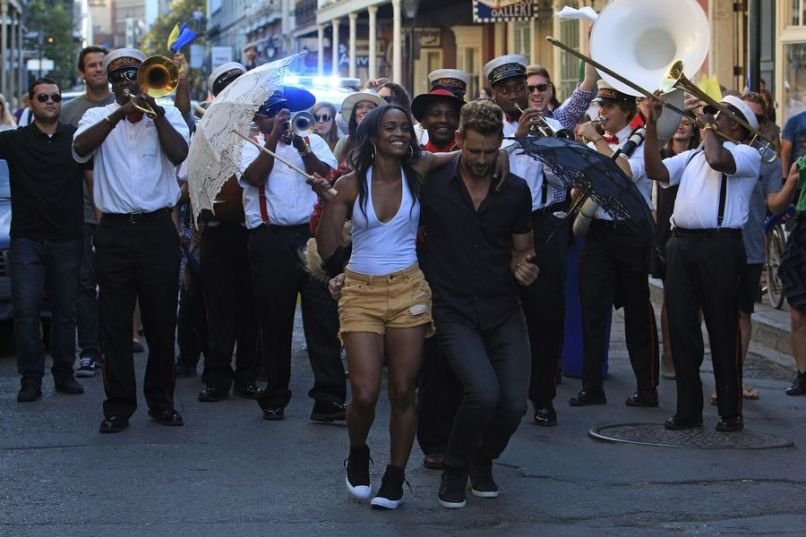 They went to dinner (in a Mardi Gras float warehouse), and I have to say that I LOVED Rachel.  She was well spoken, poised, totally approachable, and fun!  And y’all, we better all hope that Rachel makes it to hometown dates, because her daddy is a federal judge.  AND THAT WOULD BE SOME GOOD T.V.  I wonder how Judge Daddy is going to feel about Nick’s romp in the bouncy house.  They talked for a bit about how he would address him, and they settled on “sir”.  Good call.  I might have gone with “The Honorable Judge So and So”, but “sir” will do.

GROUP DATE:  Till Death Do Us Part

So the group date took place at a haunted house.  With a caretaker named “Boo”.  Clever.  Boo explained that the house is haunted by an 8 year old girl named May who has spent eternity searching for her missing doll.  He took the group on a quick tour, pointed out some “spooky” things, and showed them something covered in a sheet.  Mr. Boo told the girls to not touch the sheet.  Because it might tick the ghosts off.  #thanksboo

In the most precious hick accent you’ve ever heard, Raven said, “If I see a ghost, I’m gonna rebuke that thang in the name of Jesus.  I’m not putting up with it.”  Raven.  I love you.  I mean, she can beat the tar out of somebody with a stiletto, and then she can turn around a rebuke a ghost in the name of Jesus.  The girl has some serious range!

They got out a Quiji board and started to play with it.  And I was totally with Vanessa on this.  I would have been all BuhBye.  Mama don’t play with Ouija boards. 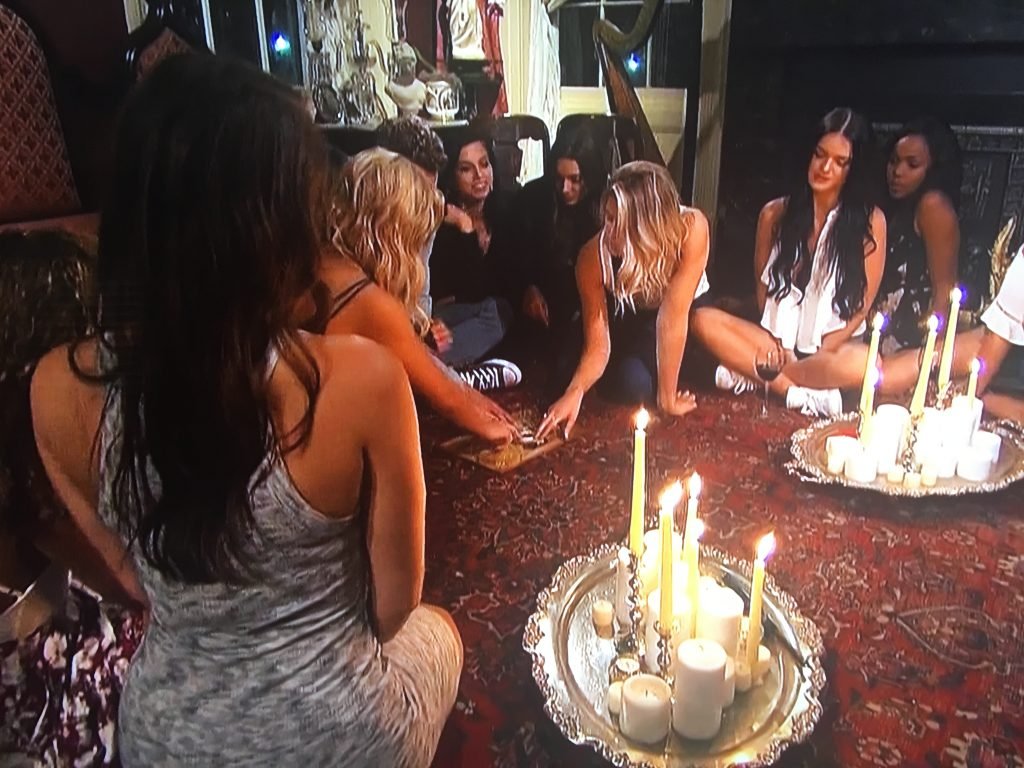 Of course somebody touched the sheet (don’t even remember who), somebody put on a ghost’s hat, somebody moved May’s beloved baby doll, rocking horses rocked, lights flickers, and a chandelier fell.  I tell you what, the Bachelor interns were working over time at this house.

In the middle of all the spookiness, Raven “accidentally” told Nick she loved him, but Danielle got the group date rose.  Sidenote, when Raven proclaimed her love, she stated that her love started when Nick sang The Little Mermaid to her.  UM, WHAT?  Why in the world would we not have seen this?  I mean, THAT IS SOMETHING I’D ACTUALLY LIKE TO SEE!  Is it possible Nick can sing too? That would be a triple threat, ladies!  #butwhocares #nobigdeal #iwantmore

2:1 Date:  Meet Me In The Bayou with Corinne and Taylor

Before we get to the date, let’s talk about how Corinne and Taylor prepared for the upcoming 2:1.  Taylor meditated with oils.  BORING. 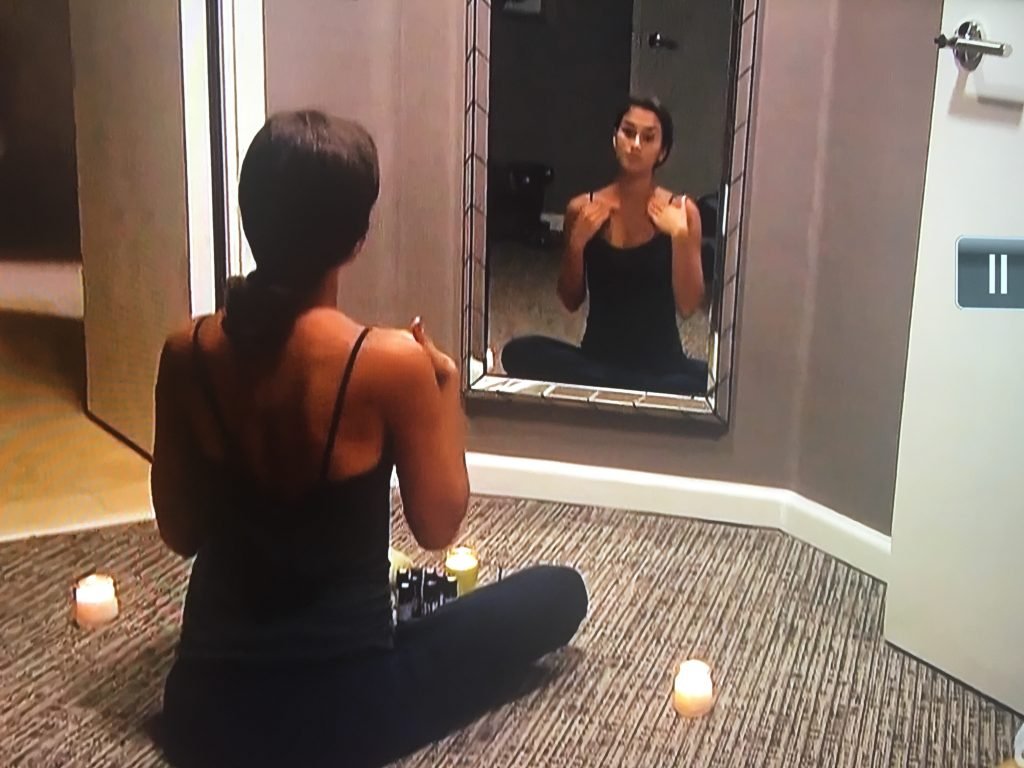 Corinne took a different approach.  She ordered enough room service to feed 12.  And wine. And I respect that.  At that moment, I felt a closeness to Corinne that I never dreamed was possible.

Mamas…….can you think of anything else that sounds better than being in a hotel room… by yourself… taking a bath while drinking champagne…. slipping into a nice fluffy robe…..and having stupid amounts of food being delivered to you.  That’s the stuff dreams are made of, ladies. 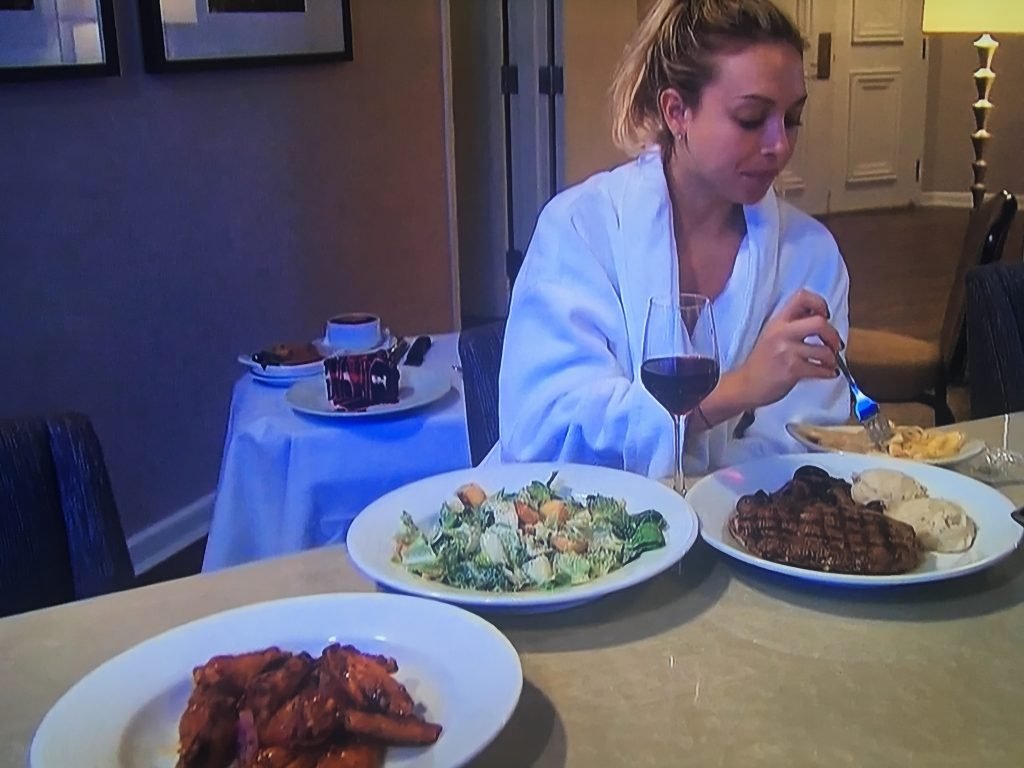 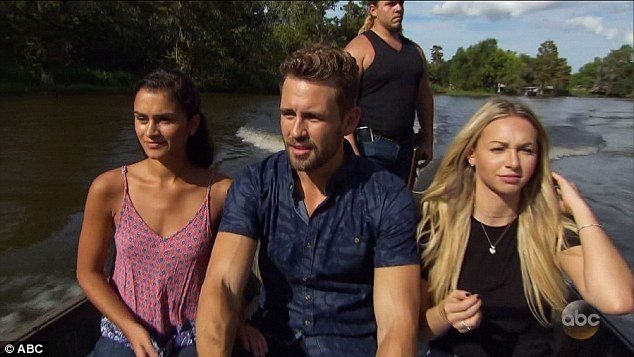 The dress code for the swamp and voodoo ceremony was casual:  jeans and tanks or tees, bras apparently optional.  I’m looking at you, Taylor. They walked into the woods where there was a woman reading tarot cards.   Here’s the deal.  You don’t have to be a psychic to know that these girls are cray and that things are going to end badly in the Bayou. 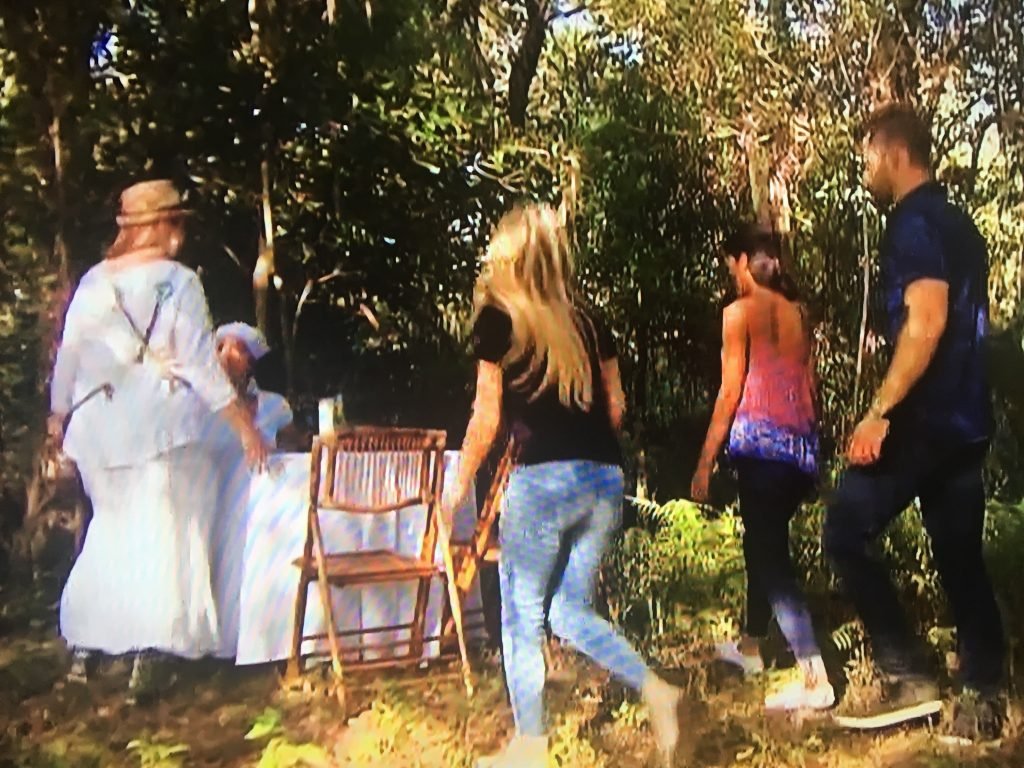 She separated the girls to read their cards….and when each girl spent alone time with Nick, they both spent their time bad-mouthing the other girl. 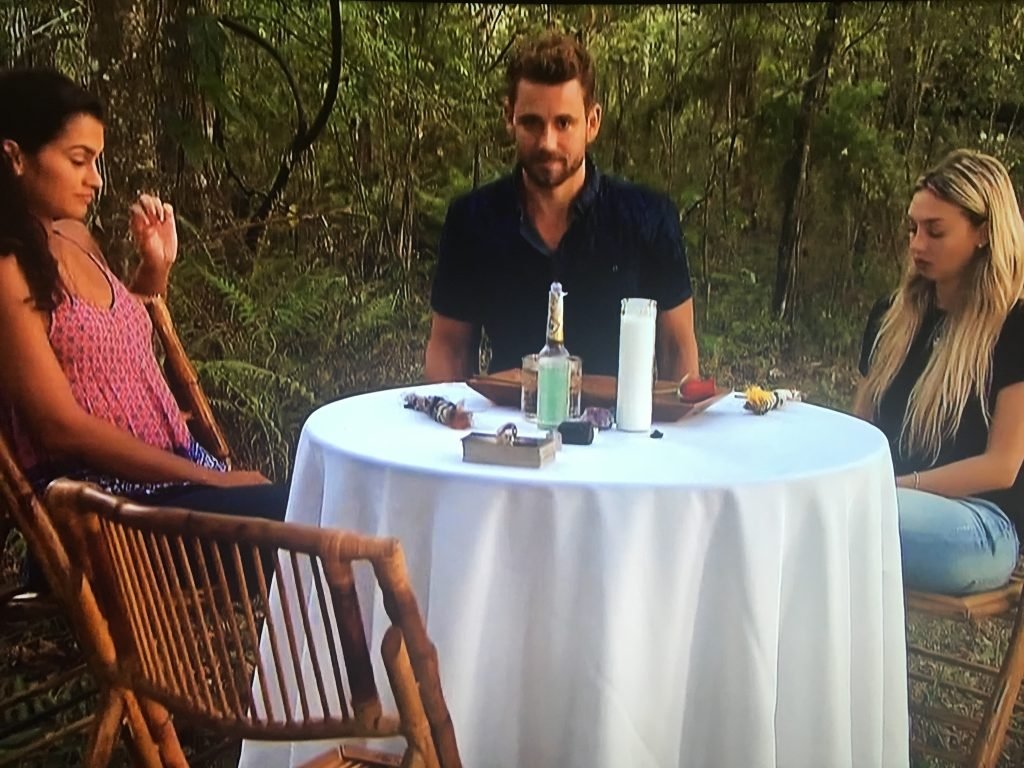 Nick gave Corinne the rose, the happy couple hopped back in the boat, and Taylor was left sitting in the woods by herself.

It’s strange, I still want to punch Corinne in the trachea…AND YET, I want her to stick around because I’m dying to meet her family.  #andthenanny

On her way back to civilization, Taylor stopped by VooDoo Central and apparently had some sort of ritual performed on her.  UM.  NO THANK YOU. 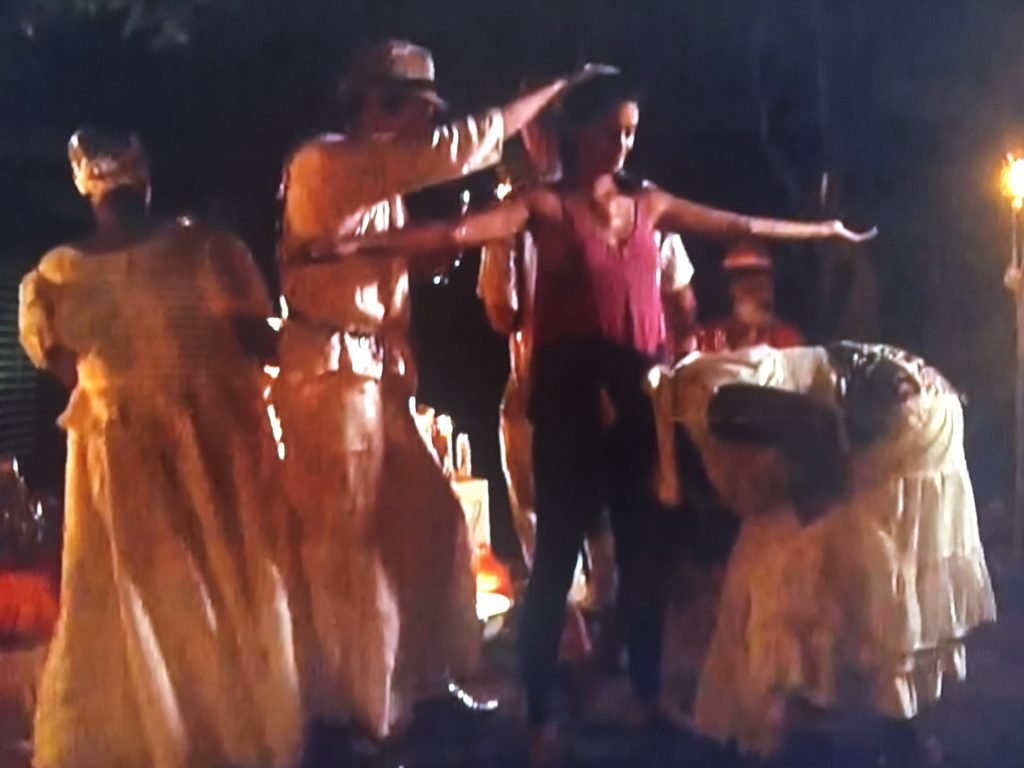 Corinne and Nick went to dinner.  She was telling Nick how she was so glad that they got to spend alone time together.  BUT GUESS WHO SHOWED UP.  I’ll give you one hint:  She has a Master’s degree.  That’s right, our resident psychotherapist couldn’t leave “without speaking her truth”.  Oh boy, that’s gonna be good.

But before the show ended, we got to see a fun little exchange between Shark Girl and Nick (with a Nicholas Cage mask on).  I’m ready to start seeing Shark Girl in more than just outtakes!  SHE IS HYSTERICAL. 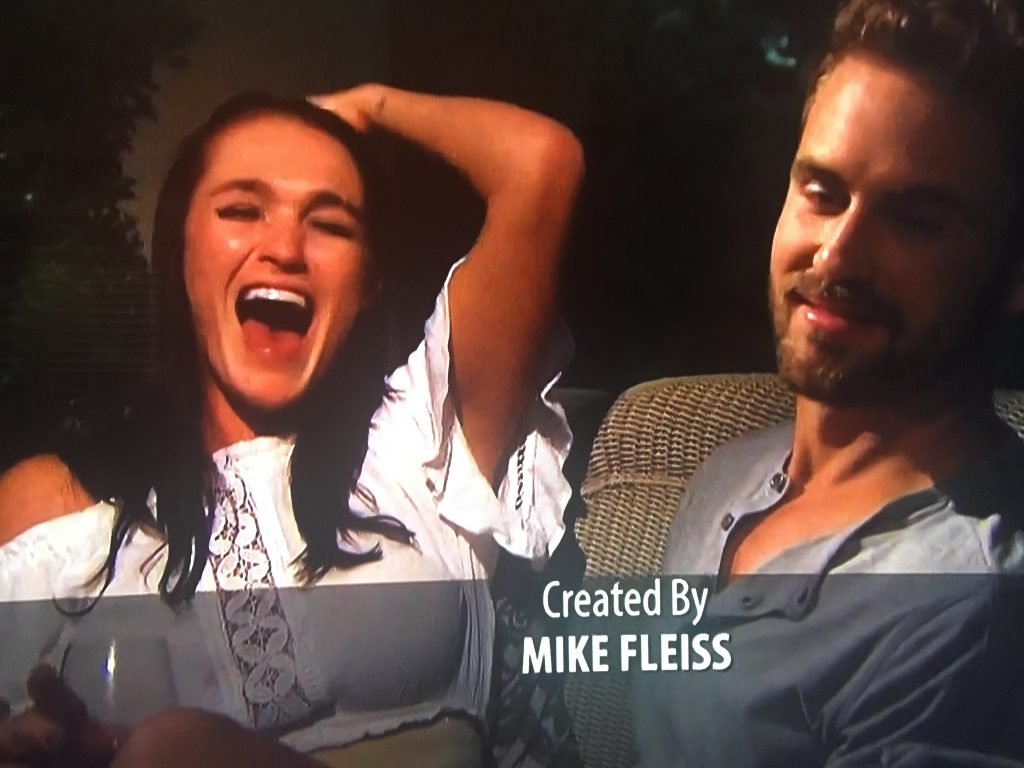 Now, before you go, something for all of you wine and rose lovers out there!!!!!!  Click HERE for these tops.  They are technically pajama tops, but I’m thinking they would be darling worn out of the house with jeans and converse.  They would certainly make excellent lounge wear. 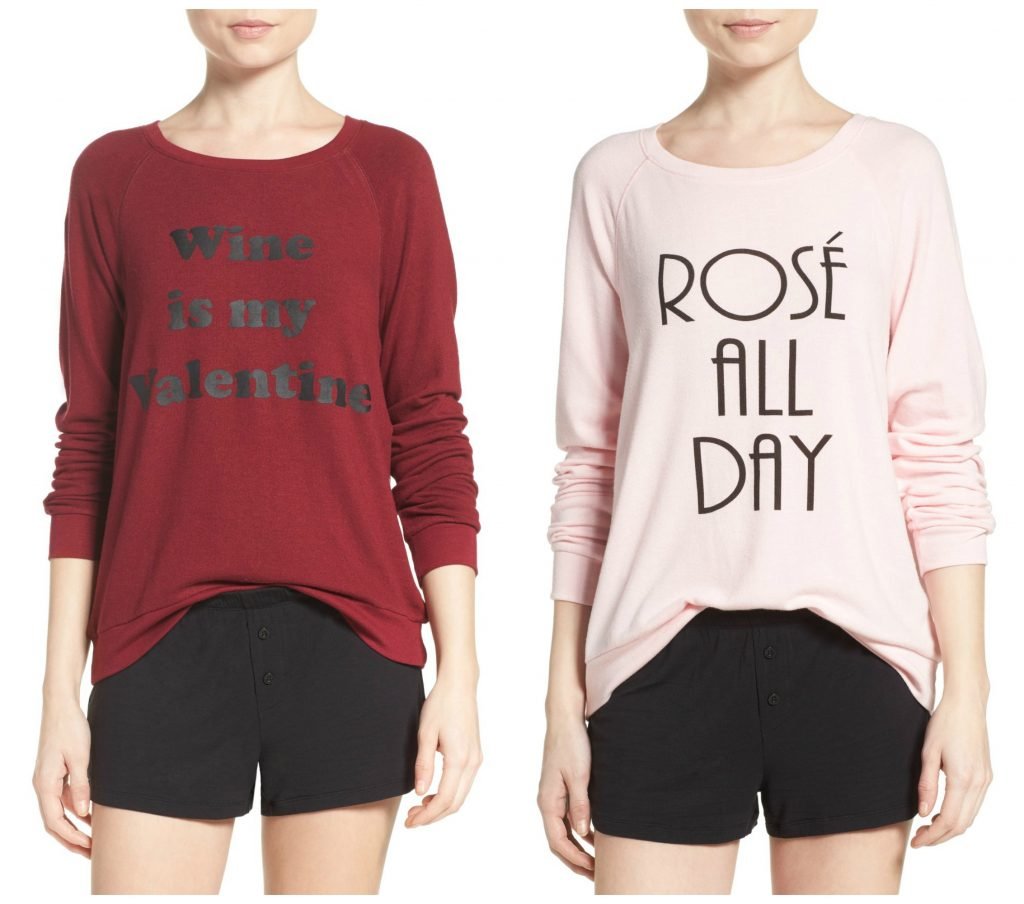 See y’all back here on Friday for Friday Favorites!

Filed Under: Fashion, The Bachelor 51 Comments